Trumpsters On The March

Just for the record, there was a pro-Trump march in Philadelphia today.  And here it is: 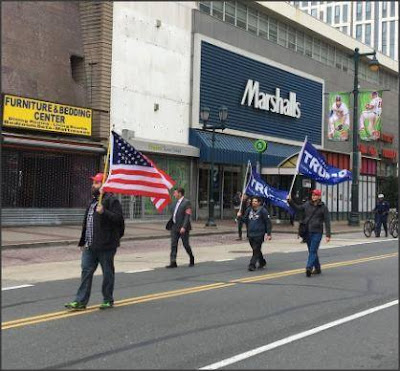 How long will our mainstream press go on pretending that the Trump wave was anything but a one day phenomenon, generated by billions in spending by right wing sociopaths and a foreign dictator?

Sigh, probably forever, or at least until the nuclear weapons start going off.  They really will destroy the world for a few months of profits.
Posted by Green Eagle at 9:00 PM

Trump will report that march as 4 thousand people, and the media will evaluate his statement as half true -- the 4 part.

I'm guessing the guy with the arm band was Security, keeping the crowds back.

We've seen so many of these gigantic humiliations the last few years. Didn't it occur to these people that, when only four marchers showed up, they should just quietly disappear and not provide the country with one more proof of their own insignificance?

By the way, I think all those people that think that legions of right wing freedom fighters are out there just waiting to surge through the streets shooting liberals and brown people, should look at these marches and figure out what is really going to happen.