The Man Who Would Be King

April 21, 2017
Here is a story that has bothered me for some reason, but seems to have been taken by the mainstream press as just a minor aberration in Donald Trump's behavior.  Trump has a visit to England planned in the fall.  As part of his trip, he has demanded that he be allowed to ride along with the Queen in the royal coach. 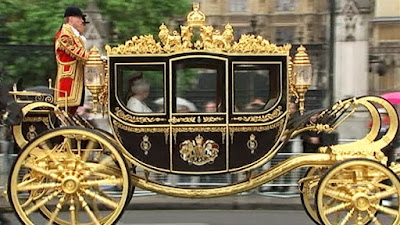 Maybe it is difficult for someone without familiarity with the country to appreciate what a colossal insult this is- it's like demanding that he be allowed to wear the crown.  You could, I suppose, just chalk this up as another example of Trump's pathological need to bully and humiliate everyone he comes in contact with, and that would be true; but I think there is more to it than that.

I commented a little while ago about Trump's replacing his top advisers one by one with members of his own family.  My thought was that, as he has taken power, his megalomania has grown, and merely being President is not enough for him.  He is coming to think of himself as the founder of a dynasty, or to be blunt, a King rather than a President.  Seen in this light it is hardly surprising that he is now insisting that he be treated exactly like real royalty.  Expect to see more of this sort of thing, as his frustration with the limitations of his position grow, and he attempts to assert his right to do whatever he damned pleases, even to the point of handing the country to his family in perpetuity.

Zog said…
According to snopes, it seems to be common operating procedure for visiting heads of state to be invited to ride in one of the royal coaches. (Yes, Queen Elizabeth II has multiple royal coaches.) Mexico's Enrique Peña Nieto, China's Xi Jinping, and Russia's Vladimir Putin have all gone on such a ride.

However, while Obama had been invited to ride in one of the coaches on a previous visit, he declined because of the costs and labor needed to provide security. Trump doesn't care. His role model rode in such a coach (see the picture at snopes), and Trump wants to be just like him.
April 21, 2017 at 11:40 AM

Green Eagle said…
Sorry for that. Cloudy, our beautiful Shetland Sheepdog got sick and died today, and I guess I wasn't being very careful about what I wrote.
April 21, 2017 at 9:02 PM