Who Are The Real Welfare Chiselers

This is something that I, among many honest people, have been pointing out for years, but as it is virtually ignored by the mainstream press, it's just as well to bring it up once in a while:  Republican States are overwhelmingly recipients of Federal tax money that is extorted from Democratic States.  Of course, we constantly hear the exact opposite from Republicans- that the hard working real Americans in rural areas are robbed to support those brown and black people in the cities, so we need to bring up the truth on occasion.

Here's a recent article from Buzz Flash, entitled "Blue State Voters Subsidize Southern Red State Voters, Not the Other Way Around," which makes this point, and is well worth taking a look at.  It is illustrated with the following map, which pretty much says it all: 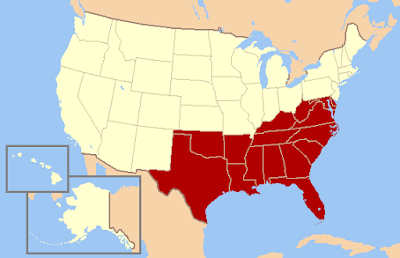 This shows the Southern States that live off of the earnings of the rest of us.  A sample of the article:

"Nine of the ten states with the largest percentage of nonpayers are in the South and Southwest. In Mississippi, 45 percent of federal tax returns remit nothing or receive money with their federal tax returns; that is the highest percentage nationally. Georgia is next at 41 percent, followed by Arkansas at 41 percent, and Alabama, South Carolina, and New Mexico at 40 percent... Yet, every election, the myth that white rural voters are paying to prop up poor people of color in cities is trotted out."

Mississippi is 37.3% Black; that is the highest percentage nationally. Coincidence? I don't think so.

"Arkansas at 41 percent, and Alabama, South Carolina, and New Mexico"
Alabama and South Carolina are also in the top six in percentage of blacks.
New Mexico is 48.0% Latino; that is the highest percentage nationally.

"so we need to bring up the truth on occasion."
hard working real Americans in the suburbs are robbed to support lazy people in rural areas.

"Coincidence? I don't think so."

But not for the racist reasons you think.

And New Mexico? There, Anglos were violating old Spanish and Mexican land grants, robbing Latin@s there with as much gusto as they were robbing Blacks in the Deep South.

So glad to see our current resident scum, Carl, responding to the facts by sinking into race hatred.

Black people may be numerous in the South, but they do not run the governments down there; white people do, and they are responsible for running them for everyone's benefit. The fact remains that Democrats are the drivers of the nation's economic engine, and Republicans are basically nothing but thieving moochers.

Funny, isn't it, Sam, that black people can be so quickly transformed from the victims of the systems in Southern States into the chief perpetrators; at least in the minds of hate filled Aryan supremacists like Carl.

Doesn't the biggest welfare cheat of all have orange skin?