From Bad to Worse at United

And now this news, helpfully brought to us by Yahoo:

"Rabbit set to be world's biggest dies on United Airlines flight in fresh PR disaster...Simon, a three-foot continental rabbit, was reportedly travelling from Heathrow to Chicago’s O’Hare Airport after the 10-month old bunny was purchased by a celebrity owner.


But breeder Annette Edwards has now claimed that the animal was on course to grow even bigger than his father Darius – who became the world’s biggest rabbit after growing to 4ft 4 inches."


Here's a picture of Simon's father: 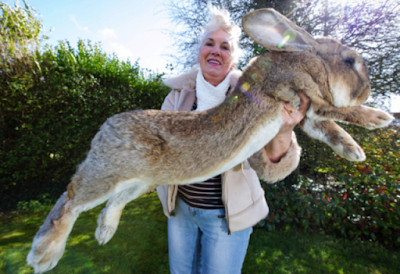 USA Today reports that a third of all animal deaths on US flights the last five years occurred on United Airlines.

Apparently, there really is something going wrong with United, as stories about their malfeasance seem to be in the news every couple of days.  I can't pretend this is as important a story as whether Trump has decided to incinerate the world today, but I'm sure you all appreciate seeing the picture of the giant bunny.
Posted by Green Eagle at 12:14 PM

If he was on United, it was probably suicide.

Photo is 'shopped; I can tell by the pixels — and a missing hand supporting the rear end of alleged big bunny.

Anonymous, I see what you mean. As a person tolerably familiar with Photoshop, I can see some signs that could be suspicious. Anyway, here is a link to a google image search for Darius the bunny, with a lot more pictures. Take a look and let us know what you think: