Showing posts from June, 2019
Show all

A Song In Honor of President Trump's Visit Today with Vladimir Putin.

I'm rather a blues fan, so I thought I would let John Lee Hooker speak my feelings for me.
2 comments
Read more

The Day That Democracy Died

June 27, 2019
When you get old and your grandchildren ask you when it was, exactly, when democracy came to an end in the United States, you can answer,today, June 27, 2019. Today is the day that five Republican appointed Supreme Court Justices ruled that the Federal Government has no right to protect itself from partisan rigging of elections for its own officials: "The Supreme Court’s conservatives decided Thursday that federal courts do not have a role to play in deciding whether partisan gerrymandering goes too far, giving a dominant political party in a state leeway to draw electoral maps that preserve or even expand its power. “We conclude that partisan gerrymandering claims present political questions beyond the reach of the federal courts,” Roberts wrote. “Federal judges have no license to reallocate political power between the two major political parties, with no plausible grant of authority in the Constitution, and no legal standards to limit and direct their decisions.” The
2 comments
Read more

Well, At Least Something Good Is Coming from Trump's Tariffs 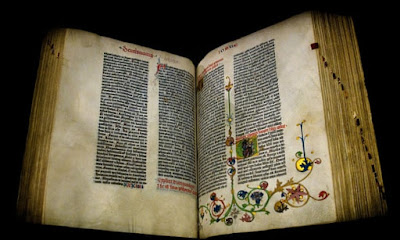 From the Washington Post today: "A ‘Bible tax’: Christian publishers warn that China tariffs could lead to costly Bibles" These days, you have to be thankful for any good news that comes along. "Trump’s proposed tariffs on $300 billion in Chinese-made products would affect books and other printed materials, according to Bloomberg. That includes Bibles, which are overwhelmingly printed in China because of the specialized technology and skills they require to produce." "Specialized technology and skills!"  Only available in China!  I wonder what Chinese technology and skill was required to produce this bible, about 570 years ago in Germany: The bible is just about the most printed book in world history.  Who knew that every edition was printed in China? Funny that the same "Christians" that go on a nationwide screaming fit whenever someone suggests that they don't have the right to deny employment to people because of their r
4 comments
Read more

June 14, 2019
For the following headline today: "U.S. releases video purporting to show Iranians removing mine after tanker explosion" Purporting to show... I remember the runup to the Iraq invasion, and the way clearly preposterous "evidence" was bought en masse by the mainstream press.  The press in this country is still pretty terrible, but thank heaven that at least one major national news source isn't ready to take the current Republican administration's claims at face value.
2 comments
Read more 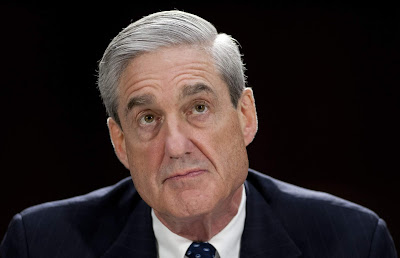 The world's most honorable man Let's face it- in the last two years of endless talk about Robert Mueller, the Democrats, one and all, have absolutely forgotten the single most important fact about him: THE GUY IS A LIFE LONG REPUBLICAN. Not just an ordinary Republican either, but one so loyal that he worked his way up to one of the most important positions in the government, as head of the FBI, an organization that has demonstrated constant Republican bias for decades. And here's another fact which Democrats still haven't learned: THERE IS NO SUCH THING AS AN HONEST REPUBLICAN. Oh sure, there are a few suckers out there in the heartland that actually believe the lies that the Republicans have spun for a century, but there isn't a single honest person among the big guys in Washington, and that includes Mueller. So, let me present my cynical view of what Mueller did:  Mueller pulled off the feat which no other Republican has managed to do, and that
3 comments
Read more

Adhering to the enemy, Giving them aid and comfort...

June 11, 2019
Donald Trump today: “I just received a beautiful letter from Kim Jong Un,” Trump said. “I think the relationship is very well, but I appreciated the letter. I saw the information about the CIA with regard to his brother or half brother, and I would tell him that would not happen under my auspices. I wouldn’t let that happen under my auspices. I just received a beautiful letter from Kim Jong Un.” Let me remind you that the United States and North Korea are still in a state of war with each other.  If this is not adhering to the enemy against our own government, I don't know what the hell would be.  The guy is a brazen traitor, and his entire party along with the complicit mainstream press refuse to acknowledge that fact, so this criminal's approval ratings still hover in the 40% range, as opposed to the 0% range where they belong. And thanks a lot, Nancy Pelosi, for seeing that the Democrats do not present a unified front for the truth, and are squandering every advantage
2 comments
Read more

June 06, 2019
I am now going to court being attacked for one of the worst specimens of "mansplaiing" in recorded history, but as Green Eagle has never feared to rush in where wise men fear to tread, here goes: THE FIGHT TO BAN ABORTIONS IS NOT ABOUT WOMEN'S RIGHTS. What we are fighting for is to prevent the country from being ruled according to the whims of a pack of religious fanatics.  Giving in on this issue is agreeing that it is okay for lunatics and con men to run the country.  The loss of women's rights is just one small part of the danger that faces us, in this onslaught against our right to have any say in the way we live.  This is nothing but a step in the direction of a small minority that rule everything, and a huge majority of beaten down, abused workers; i.e. a fascist dictatorship. I, for one, would like to see public agreement among all decent people about this fact, so that we can all work together for the common good.
6 comments
Read more

In The News Today

June 04, 2019
Just a reminder of what a miserable place Republicans have made of our country, here's a quick list of stories in my news feed today- no comment needed: "Carmakers See $17 Billion Wiped Out by Trump’s Mexico Threat" "Trump sells Qatar $12 billion of U.S. weapons days after accusing it of funding terrorism" "Paul Manafort to Be Sent to Rikers, Where He Will Be Held in Isolation" "Child porn charges for Trump-tied Mueller witness raise questions" "US bans cruise ships and group tours from visiting Cuba" "Merkel rebukes Trump politics in Harvard commencement speech: 'Tear down walls of ignorance' "Alabama Mayor Calls for Killing LGBTQ People in Facebook Post" "Empty streets greet Trump motorcade as it enters the Mall, central London" "THE IMF CONFIRMS THAT 'TRICKLE-DOWN' ECONOMICS IS, INDEED, A JOKE" "White House directs Hope Hicks and Annie Donaldson to ignore
Post a Comment
Read more
More posts