Showing posts from February, 2022
Show all

The State of their Lies Today 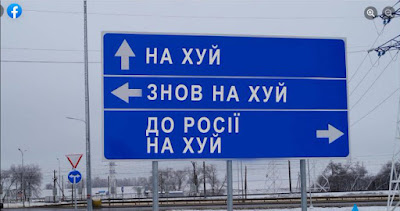 Translate it yourself- I think you should be able to figure it out pretty quickly even if you don't speak Russian- particularly the direction at the bottom. As the world leader of the White Supremacists, Vlad Putin has not exactly spent the last few days covering himself and his followers with glory.  That's got to be written out of history as fast as possible.  Let's just take a look at some of the ways that, at this early point, Conservatives are explaining that their newest hero has not failed them.  Sorry, I can't be bothered to let you know the sources of this garbage, so you will just have to trust me when I tell you that I didn't make it all up. "Situation Update: Future Proves Past!! Trump And Putin's War On Deep State Worldwide!! This Is The Storm Into The Dark Winter!!" See, it's not an attempt by an inept dictator to crush a neighboring state for no reason, it is Putin and Trump triumphing over the deep state! "Russia's almost d
2 comments
Read more

The Lying Press Versus The Truth

Get Over It Already, Guys. 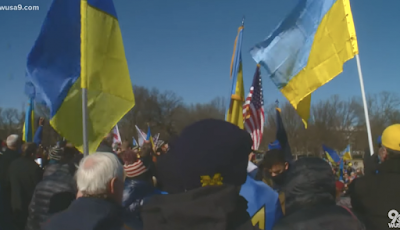 I just don't understand it.  The Super Bowl was weeks ago, and people are still going around all over the world waving L.A. Rams flags: I mean, it was only a football game.  Enough is enough, already.
3 comments
Read more

A Tale from the Ancient Past

February 26, 2022
Well, three days ago, anyway.  Anything becomes as ancient as Aristotle the minute it doesn't suit the narrative of Conservatives.  Anyway, this is an article from CNN , our nation's leading storehouse of mealymouthed fact-ignoring, for two decades now: "Trump sides with Putin as Biden tries to stop a war... As President Joe Biden reprises the fabled presidential role of leading the free world, the predecessor who wants to succeed him is showing Putin that impunity, dictator-coddling and hero worship will return if he wins back the White House." Pretty amazing take on things, considering the focus of our press on the narrative that Biden is a failure. Here's our beloved former (and maybe still) President, Donald Trump: “I went in yesterday and there was a television screen, and I said, ‘This is genius.’ Putin declares a big portion of the Ukraine, of Ukraine, Putin declares it as independent. Oh, that’s wonderful,” Trump said in an interview on “The Clay Travis
Post a Comment
Read more

Dumbest Opinion Piece of the Year

February 24, 2022
From the Washington Post's editorial board: "Opinion: Why Ukraine — and Russian aggression against it — matters to Americans" Because the last time a European dictator started grabbing up adjacent countries, and a largely Republican opposition in the US claimed it wasn't our problem, fifty million people died. There, you self important dicks, you didn't need a whole editorial to answer that question.
1 comment
Read more 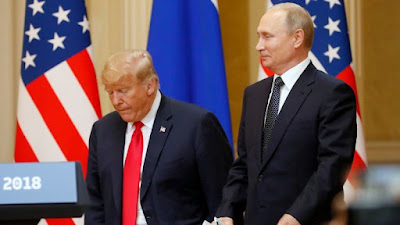 Trump and Putin, dramatically showing their relationship, in the infamous Helsinki conference  Donald Trump, in the last couple of days: “I went in yesterday and there was a television screen, and I said, ‘This is genius.’ Putin declares a big portion of Ukraine — Putin declares it as independent. Oh, that’s wonderful,” Trump told a conservative podcaster in an interview published Tuesday. "I said, 'How smart is that?' And he’s gonna go in and be a peacekeeper. ... We could use that on our southern border," the former president said, describing Putin as “a guy who’s very savvy” and whom he knows “very, very well.” “If properly handled, there was absolutely no reason that the situation currently happening in Ukraine should have happened at all. I know Vladimir Putin very well, and he would have never done during the Trump Administration what he is doing..."Russia has become very very rich during the Biden Administration, with oil prices doubling and soon to be tri
1 comment
Read more

I Know People Will Scream at This 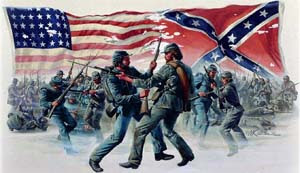 So, Ukraine became a part of the Soviet Union around 1921, and broke free in 1991, a period of seventy years.  Now the Russians seem posed to use military force to make Ukraine a part of their country once again. This is not the first time in history that something like this has happened.  I am thinking of a country that was established by a revolution, like the Soviet Union, and then about 85 years later, a breakaway republic was formed.  The country I am referring to used overwhelming military force to regain that territory. Can't remember who I am talking about?  Here's a hint: No, I am not suggesting that the Union did not have a right to crush a state devoted to one of the worst barbarisms in the history of civilization, nor am I equating Abraham Lincoln with Vladimir Putin.  But the relative differences in the moral quality of these countries' two leaders should not obscure the fact that there is a bit of a similarity there.
3 comments
Read more 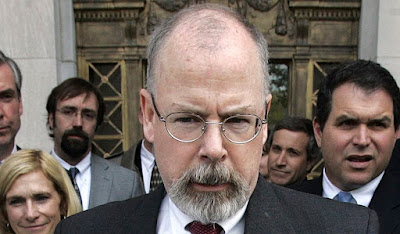 What a stern man.  He must really be on to something big, huh? Just kidding, of course.  He's a Republican, so you know what kind of person he is.  Anyway, here are a few details.  John Durham is one of a succession of right wing legal hacks that the Republican party has used to spread lies about Democrats' supposed criminality.  He joins the ranks of Alan Dershowitz, Jonathan Turley, Pants Down Rudy and Bill Barr, who have utterly destroyed their reputations as honest lawyers in order to serve the cause of promoting one party rule in this country.  In April, 2017, Donald Trump assigned to Durham the task of "investigating" the supposed treason committed by Hillary, et. al. in the 2016 election, which involved revealing Trump's multiple connections with Vladimir Putin, a foreign dictator you may have heard of. Shortly before Trump got garbage canned from the White House, he had this clown appointed "special prosecutor," in an effort to prevent Joe Biden
1 comment
Read more

This News from Eastern Europe 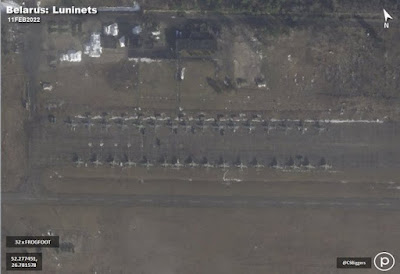 "The number of deployed Su-25 at the Belorussian Luninets Air Base has increased to 32 units." That's great.  Keep them in straight lines like that, guys, so a couple of F-35's can destroy them all at once.
1 comment
Read more The great battle... I totally stole this graph from Crooks and Liars, but I think everyone needs to see it. I'm not sure this includes the millions who have supposedly died from the vaccine itself, according to Republicans, or the ones who have been transformed into non-human species, or the hundreds of millions who are going to die in the next couple of years from vaccine induced cancer, so maybe things will work out great for the Maga people, despite a thousand of them a day voluntarily killing themselves for Trump.  We'll see.  If they don't all kill us first.
1 comment
Read more 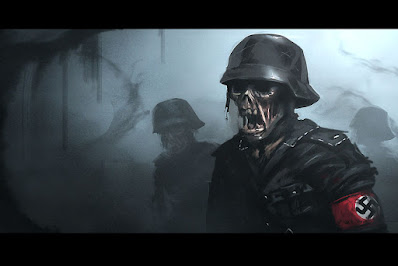 So, I saw the following in an article by novapsyche at Daily Kos today:  "I read in late 2020 that Covid-19 could lead to what neuroscientists called dysexecutive syndrome... One of the structures affected by DS is the ventral medial prefrontal cortext (vmPFC), damage to which has been linked with increased affinity for authoritarianism AND religious fundmentalism." Great.  Just when we have been giving a sigh of relief over the fact that right wing stupidity is relieving us of the presence of about a thousand white supremacists every day, now we learn that it's turning the rest of them into brain dead fascist zombies. And we thought that all that stuff in those cheap movies was fiction.  What next, a real alien invasion?
4 comments
Read more

News from the World of Tennis 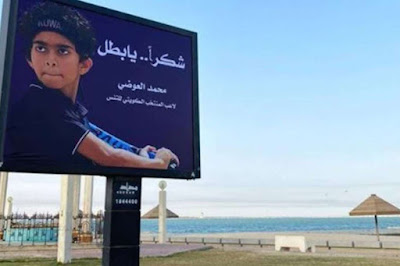 Never thought you'd see Green Eagle, who knows as much about tennis as he knows about orthopedic surgery, talking about this, huh?  And it is not even about that dickhead that refused to get vaccinated and was kicked out of a tournament in Australia. No, this is about one Mohammed Al Awadi.  Never heard of him?  Well, if you lived in a large part of the world (hint: the Muslim part) Mohammed Al Awadi would be your latest hero.  And what did Mohammed Al Awadi do to achieve such adulation? "Mohammed Al-Awadhi is 13 years old and ranked ninth in Asia and the best in his category in Kuwait at all age stages Big Praise For Young Al Awadi as He Refuses to Face Israeli Player in Dubai Tennis...The young Kuwait tennis player Mohammad Al Awadi is being hailed as a hero for pulling out of a Dubai tournament for the under-14s because he doesn't want to face an Israeli competitor and wanted to be branded as a normalizer with the Jewish state." This is typical of literally hundre
3 comments
Read more 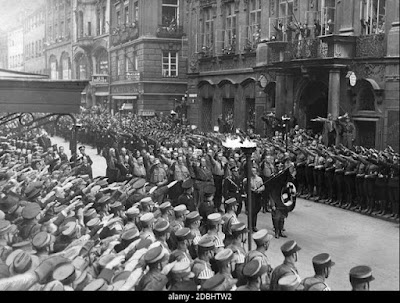 From the Republican National Committee today: “WHEREAS Representatives Cheney are Kinzinger are participating in a Democrat-led persecution of ordinary citizens engaged in in legitimate political discourse, and they are both using their past professed political affiliation to mask Democrat abuse of prosecutorial power, therefore ...” Ordinary citizens. Like these guys, I guess.  The really frightening thing is that the Republican Committee members are not lying.  They actually believe that a Fascist coup attempt is legitimate political discourse. Well, there you go.  Germany, 1923.  A well meaning but hapless liberal government that refuses to admit what is happening, and a violent mass psychosis among right wingers.  Turns out, it is pretty easy to induce that psychosis on wingnuts, and almost impossible to get liberal leaders to face reality. I'm not predicting that the Fascists are going to win this time, but I'm not predicting that they won't.  Sad to say, it is mostly
3 comments
Read more

It's Worse Than They Think

February 01, 2022
Sorry, but people on the left still seem to be too shell-shocked to face reality.  Case in point, this article today, from Daily Kos: "The U.S. media are still flummoxed by the question of how to cover Donald Trump’s actions, even a full year after his ejection from the Oval Office. That ambivalence is understandable; never before in the history of this country has someone so thoroughly brazen and insouciant in his raw criminality occupied a position now enjoyed by Trump, whose every utterance now smacks of outright, seditious intent. Trump is indeed an anomaly they have never dealt with, with his millions of supporters comprising an imposing swath of the American electorate." The media is not "flummoxed," they are willing collaborators.  Since Ronald Reagan made it possible for the mainstream press in this country to be purchased lock stock and barrel by huge corporations, it has become nothing but one more tool, like the Republican party, to force the will of ri
1 comment
Read more
More posts