Showing posts from July, 2022
Show all

July 16, 2022
Mob boss' wife died of ‘blunt impact injuries just before he was to be forced to testify under oath about his family dealings...Nothing to see here- move along.
2 comments
Read more I just want to say that the relative decrease of Wingnut Wrapup posts in the last year or two does not in any way reflect a decline in the idiocy of the right.  In fact, all that has happened is that the production of this malignant garbage has fallen more and more under the control of centralized right wing forces, so there are just far more repetitions of the same sick claims, and less original thinking, if it can be called that.  Anyway, on we go.  First, I was pleased to find this rather detailed and very confident prediction that the world is going to end next summer: "According to the Bible, there is no need to make plans for next summer holidays for year 2023, unless you go before July, as the world is going to come to an end on July . Of course, there have been many doomsday predictions in the past that have not come true, but then they have not been linked to the Bible." Actually, they have all been linked to the Bible.  They were just bullshit, just like most of th
3 comments
Read more

July 08, 2022
I always knew that Joe Biden was a gutless worm.  He was afraid to stand up to the Republicans when he was a Senator (this is called by the idiotic term, "moderate") and in the end he has refused to use his power over and over again to try to save this country from a mortal risk which he understands perfectly well. Yes, I supported him in 2020, because I could see that he could win, and any Democrat was better than any Republican, but I guess I lied to myself about his willingness to confront the threats that face this country.  And that includes picking an Attorney General that is just as weak as he is.  Republicans are allowed to openly accuse Democrats of eating babies and being minions of Satan, while Democrats like Biden are afraid to speak the obvious truth about Republican treachery.  Biden is a blind fool that still believes, after decades of getting stiffed, that Democrats can work with Republicans.  By now, every top Republican should be in jail with no bail (fligh
5 comments
Read more 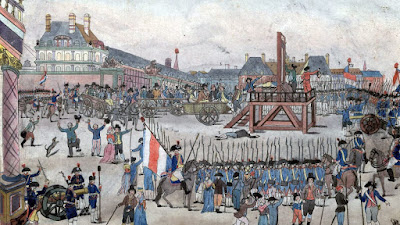 " Democrats and even some Republicans   now agree   President Trump should face serious consequences for goading a mob to attack Congress last week. But how?"   This has been the penalty for treason by government leaders since the dawn of time.  No need to think things out beyond that now.
Post a Comment
Read more

July 03, 2022
Although, how many times do you have to play the sucker before you change from a victim into a collaborator?  Is being a Democratic leader a license to be stupid? Can't the Democratic leadership see that they are being suckered once again by Republicans?  They are going to buy the kabuki act of a 25 year old girl and suddenly decide that there really were decent Republicans in the Trump administration?  They are going to agree that there were people there, supporting the criminal, treasonous Republican agenda, who just didn't notice until the last few weeks that they were serving a force of monstrous evil? Shouldn't it be clear to everyone by now that the only thing that has changed is that Republicans have realized that they are not walking away Scot free from the monstrous destruction they have caused, so they have decided to all turn on Trump, and blame all the damage that their party has spent half a century creating on him, and then move on, confident in the fact that
1 comment
Read more
More posts