Showing posts from June, 2018
Show all

June 29, 2018
Ha ha, just kidding.  In the wake of discovering that he is building concentration camps for children, Gallup reports that Republican support for Trump has fallen from 90% to 87%.  This is an openly, proudly Fascist party, people, and anyone who can't see that at the present time is deeply defective, morally and intellectually.  I am always amused when I see people criticize someone on Mueller's staff or at the FBI as illegitimate to work on any Trump investigation, because they have made public statements indicating that they are opposed to Trump.  Any person who is not opposed to Trump is a vicious, hateful human being, and a traitor to this country in the bargain.  If you are not opposed to what Trump and the Republican party are doing to this country, you have no right to take part in its government, or to be considered anything but a moral degenerate.  And that includes the 87% of Republicans who will side with him in public, as well as the majority of the rest, who just
Post a Comment
Read more

Media Concern Trolling At Its Finest

June 25, 2018
The lead story from the Washington Post today!  The lead story! "Liberal hostility toward Trump aides could galvanize the GOP base... Recent displays of anger directed toward members of the Trump administration — such as the White House press secretary being asked to leave a Va. restaurant and a speech by Rep. Maxine Waters (D-Calif.) — could play into the president’s hands." Do you ever remember any of the mainstream media truly concerned that the avalanche of hatred directed nonstop by Republicans toward Democrats for decades could galvanize the Democratic base?  Never.  Because, in fact this headline article is not a kindly meant warning to the Democratic party that a howling mob of millions of Republicans might attack them because some pathological Republican liar is kicked out of a restaurant.  No, it is in fact a barely veiled threat that if Democrats do not shut up and take a few more decades of that abuse, the mainstream press, even its most allegedly responsibl
19 comments
Read more 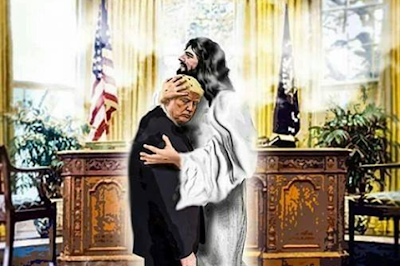 I cribbed the following picture from Digby's blog this morning: Digby assumed, as I am sure most people would, that this is a picture of Trump being hugged by Jesus- apparently a Jesus who is about 6'-10, but to me that doesn't really look like Jesus at all.  It looks more like this guy: Just wondering if that is not what they really meant.
4 comments
Read more

Both Siderism Will Never Die

June 21, 2018
Here's something I heard Brian Williams, on the "liberal" MSNBC just say about the refusal of the Republican Congressional majority to take a stand against the malignant Trump immigration policies: "I guess when they hand out the profiles in courage awards at the Kennedy Center this year, there will be none for Schumer, Pelosi, McConnell and Ryan" And that is why our country is going straight to hell.
Post a Comment
Read more

And His Wife is Scum, Too 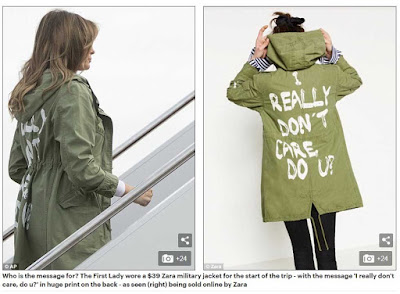 I am ashamed to admit that, in the past, I have defended Melania Trump as someone who was trapped in her position, and not responsible for the monstrous behavior of her husband. Well, you have probably all seen this, but here is Melania in a jacket she wore to take a trip to see some of the migrant children who her husband stole from their parents: This is the act of the lowest kind of scum.  I was fooled by her, but no more.  She is every bit as big a monster as her husband.
3 comments
Read more

He Can Do Whatever He Wants

June 19, 2018
Well, the Children in Concentration Camps issue cerainly seems to have taken off, even if not many people with a real voice dare express it as starkly as I do.  Anyway, everybody wants to talk about it, but as far as I am concerned, not a single comment I have heard is willing to get to the real point of Trump's inhumanity toward immigrant children. Yes, of course, this is part of a systematic stirring up of race hatred and a lust for violence in his base, to hopefully get them out on election day and keep the Republican party in charge.  That in itself is one of the most miserable things that has ever happened in the history of our country, at least since the days of slavery and beating down the Indians.  But as malignant as it is, I believe it is only secondary to another purpose of this behavior, which up to this point, no one, from whatever end of the political spectrum, has been able to face. For, I believe, the main purpose of this behavior is to make it clear that Trump
3 comments
Read more

June 17, 2018
I have discovered that out of nowhere, Blogger is refusing to send me e-mails notifying me of comments that people had made on my posts.  I don't really know how long this has been going on, but I am afraid it is for some time.  I noticed I was not getting any comments, but assumed that, because I haven't been posting much lately, people just stopped reading my blog.  But that doesn't seem to be true.  I'll try to get this straightened out, but in the meantime I think I will maybe stop content moderation until I do.
3 comments
Read more

How To Get A Federal Pardon 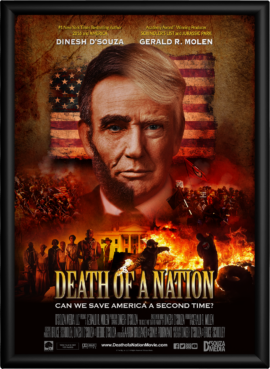 Make a movie!  Well, the right kind of movie, of course.  Dinesh D'Souza can show you the way: And here is the copy that goes with this one sheet: "CAN WE SAVE AMERICA A SECOND TIME? Not since 1860 have the Democrats so fanatically refused to accept the result of a free election. That year, their target was Lincoln. They smeared him. They went to war to defeat him. In the end, they assassinated him.   Now the target of the Democrats is President Trump and his supporters. The Left calls them racists, white supremacists and fascists. These charges are used to justify driving Trump from office and discrediting the right “by any means necessary.   But which is the party of the slave plantation? Which is the party that invented white supremacy? Which is the party that praised fascist dictators and shaped their genocidal policies and was in turn praised by them?   Moreover, which is the party of racism today? Is fascism now institutionally embodied on the right or on th
Post a Comment
Read more 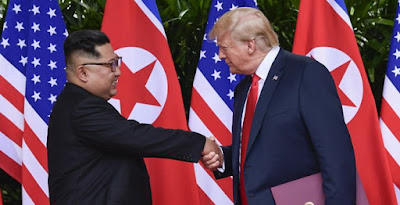 Boy, I bet this photo comforts you about the state of the world. Anyone with even a grain of sanity left knows that the Great Negotiator got his pants stolen by Kim Jong Un at the great Summit Of The Two Leaders.  So it's going to be tough for the winguts to find a way to spin this as a victory for Trump, but they are going to give it a hell of a try.  Here we go: Katie Pavlich, Town Hall:  "Denuclearization: President Trump and Kim Jong Un End Historic Summit With Signing Ceremony" Signing what?  Apparently Trump agreed to stab South Korea in the back by ending long standing joint military exercises, in return for nothing.  No sense mentioning that, however. Streiff, Red State:  "The Trump-Kim Summit Was Not a Failure but It Did Disappoint" Not a failure to Kim, perhaps, who got a major defense concession from Trump, and recognition on the world stage.  As for Trump, it is only a failure if the American press tells the truth about what happened
Post a Comment
Read more

June 12, 2018
The mainstream press, of course.  Two headlines in the Washington Post today about Donald Trump humiliating himself in front of a miserable 32 year old dictator: "The summit was a triumph of Trumpian stagecraft. The media fell for it." And as if deliberately trying to prove the truth of that comment, here is the current lead story in the Washington Post: "Trump-Kim summit yields hope for breakthrough but no guarantees" What it actually leaded was an utter collapse by The World's Greatest Deal Maker, and a gigantic loss for the United States, but God forbid that the Washington Post or any other mainstream news source should say that in clear language.  The media fell for it, all right.  Nobody is making the media "fall for it," of course.  They are falling for it because that is what they are paid to do, and if it destroys the country in the process, so what, as long as the checks don't bounce.
1 comment
Read more

A Helpful Suggestion to Bring Back Coal 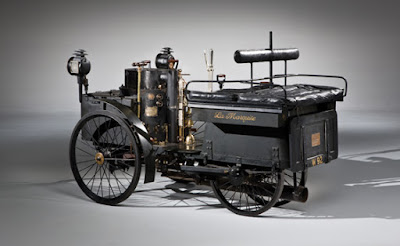 As everyone knows, there is nothing that means more to Green Eagle than helping our President come to the aid of the (white) working class that he cares so much about.  Of course, there is no white worker that Trump cares more about than coal miners, so Green Eagle wants to propose a sure fire plan to bring the coal industry roaring back to life in the United States:  coal powered cars! Why didn't anyone ever think of that before? Well, they did, so it's time for a little Green Eagle History Lesson.  In fact, here is the first car ever produced on a commercial basis, in the 19th century: This was a steam car, which could be powered by wood or coal.  Of course, steam cars are not really very practical, so Green Eagle went looking for a car with a more traditional combustion engine which could be powered by ground coal.  It turns out that during the worst European fuel shortages during World War II, some cars were actually converted to run on ground coal injected into the
2 comments
Read more 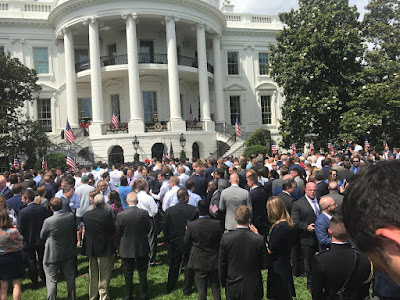 So as you may have heard, the spoiled little infant Trump "disinvited" the NFL champion Philadelphia Eagles after it became clear that most of them were going to humiliate him by not showing up (hooray for them.)  Instead, he decided to hold a "Celebrate America" rally instead.  Oh boy! Well, any long term readers of Green Eagle know how much I like to report on the actual size of right wing demonstrations, which is inevitably a huge embarrassment to them, or would be if the mainstream press didn't systematically ignore the truth.  So, here are a couple of pictures of today's event: As usual,  I always try to base my comments on the evidence of the largest possible attendance at these events; let me note that I have spent a pretty fair time searching online, and these are the two photographs showing the largest views of the "crowd" at this pathetic sham rally. Let me make a couple of observations about this.  First of all, the vast majori
Post a Comment
Read more

You have probably heard by now that Trump released the May job numbers AN HOUR EARLY!!! which has been widely reported everywhere, even though not one person in a thousand knew that this was not supposed to happen.  This gave the mainstream press a wonderful chance to hail the number of jobs gained in May as an absolutely unprecedented success, showing how great the economy is because Republicans are in charge again. What is the reality behind these claims?  Well, let's look at a little evidence.  Here is a chart of monthly job gains since 2013: Unprecedented success?  I have added the red line to illustrate the fact that there were 24 months in the last five years of the Obama administration with job gains greater than the number for last month, as well as two from the Trump administration.  So, what happened this last month was not so impressive after all.  In fact, it would be well to look at this chart to get a grasp on the truth: Here is the truth in plain view:  A co
Post a Comment
Read more
More posts