Showing posts from April, 2018
Show all

April 23, 2018
From the Washington Post this morning, this story: "President Trump's national security adviser said Tuesday that the president's decision to reveal highly classified information during a meeting with Russian officials last week was "wholly appropriate" — the latest attempt by the White House to contain the explosive disclosure that Trump potentially  jeopardized a crucial intelligence source on the Islamic State. H.R. McMaster, the president's top security adviser, repeatedly described the president's actions in a press briefing just a day after a Washington Post story revealed that Trump had shared deeply sensitive information with Russian Foreign Minister Sergei Lavrov and Ambassador Sergey Kislyak during an Oval Office meeting last week." How many of these incidents, in which the President of the United States deliberately sabotages the security interests of the United States in order to benefit Russia, are going to have to happen before
2 comments
Read more

April 20, 2018
Rudy Giuliani, on the announcement that he is becoming one of Trump's lawyers: "I’m going to join the legal team...The country deserves it." At this point, who could disagree? “I’m going to ask Mueller, ‘What do you need to wrap it up?’ he said.” How about a guilty plea to treason?  See if you can work that plea deal out, Rudy.  At this point, I am wondering if there is a thing in the world that they do not regard as a gigantic joke on all the rest of us.  Except for stealing our money to give to the likes of the Koch brothers and the Mercers.  That isn't a joke; it's the only reason they are alive.
5 comments
Read more

April 15, 2018
Call me crazy, and I certainly hate to defend anyone from the Trump administration, but I think a cabinet secretary has a right to fly first class.  Come on, every sleazy businessman and kid of a rich father flies first class; I think it's perfectly reasonable for one of the very highest officials of our government to do the same.
2 comments
Read more 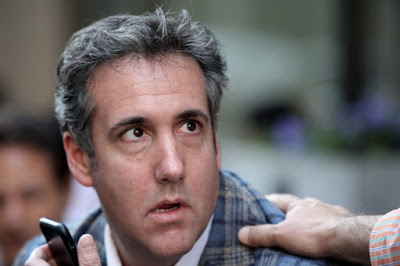 Michael Cohen, sadly only looking like he is being pinched by the long arm of the law. Most of us have some awareness of the Iran hostage negotiations in 1980, in which the Reagan campaign seems to have sabotaged the release of our hostages until after the election in a blatant specimen of treason which was never punished in any way.  What most people will not remember is the crucial incident in this ugly spectacle of betrayal- a trip by William Casey, Reagan's campaign manager, to Madrid to meet with Iranian mullahs to make the deal to delay the release of the hostages, in return for promises of future sales of weapons to Iran, fulfilled later in Reagan's reign by the sale of 2,000 TOW missiles to the Iranians in another blatantly illegal specimen of treason, which again, being committed by a Republican administration was never punished in any way. Republicans provided supposed evidence that Casey's trip never happened; only years later was it discovered that the ev
1 comment
Read more 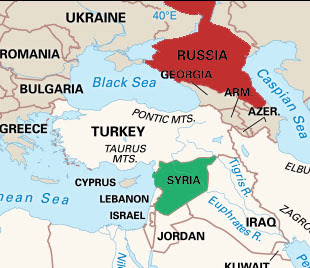 I am the last person to ever claim that Vladimir Putin is anything but a vicious dictator, who deserves to be put down any way possible, but that does not neutralize the fact that Russia has an urgent interest in seeing to it that no group of Islamic fanatics, like ISIS, takes control of Syria.  Here's a map of the northern Middle East and southern Russia.  Please note that the distance between Syria and Russia is, at the narrowest point, only about 250 miles.  That is a distance that could be covered in less than half an hour by a fighter jet, or less than four hours on a straight freeway drive, if a freeway existed there.  I ask anyone to consider what the United States would do if a genocidal Islamic state arose 250 miles into Mexico; which is to say, around Mazatlan.  Do you think we would not be bombing the whole area into oblivion, regardless of the civilian "collateral damage?" After all, we killed a million civilians in Iraq just a few years ago, for nothin
5 comments
Read more

April 13, 2018
Just to get things clear before the orgy of praise directed toward James Comey which is coming this week, here is the truth about Comey. James Comey is a right wing hatchet man, who, in by far the most important act of his pathetic life, stabbed Hillary Clinton in the back in an absolutely gratuitous raising of an issue that he knew was a total lie, right before the election, and in the process did more than any single person, Putin included, to put Trump in office. This was a deliberate, knowing act of treachery toward our country which is proving to be more damaging than almost any other single act of a government official since Robert E. Lee decided to turn traitor. Then, after Trump, in true gangland fashion, rewarded Comey's act by firing Comey and humiliating him in public, Comey decided to take his revenge, not for the damage Trump was doing to the country, but for the personal insult he suffered.  That is not the act of a patriot; it is the act of a mobbed up criminal
2 comments
Read more

I Thought He Was Going To Make Everything Better

April 12, 2018
Donald Trump yesterday: "Our relationship with Russia is worse now than it has ever been, and that includes the Cold War." I thought he said he was the greatest negotiator on earth and he was going to make everything better.  I thought he said he was so good at foreign policy that he could handle everything- it would be easy for him.  I thought he said he was going to have the greatest relationship with Russia.  What happened? Oh, and I see that the Congressional Budget Office just announced that under his tax plan, the national debt will equal the entire GDP by 2028.  At which point the Republican party will be screaming to do away with Social Security and Medicare. How can any person on earth take this vicious buffoon seriously for a second?  And how can his party and a large part of the mainstream press go on pretending that this is normal?  How can he be allowed to stay in office for a day?
2 comments
Read more 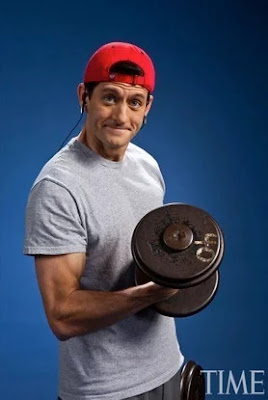 One of the great Republican liars and tools of the rich is running for cover now that it appears that he is about to earn at least a minute fraction of the consequences of his corrupt behavior. As the Washington Post reports in a headline today: "Ryan to depart Congress with a legacy of expanded spending and immense deficits" Of course, the Washington Post reports this fact as a failure on Ryan's part, when in fact it was his greatest success.  He was in Congress for the same reason that all Republicans are there: to rob the nation blind and give the money to their sociopathic rich backers.  And he succeeded just great at that. And of course, the mainstream press played along like the lap dogs they are, consistently portraying his transparent lies about the economy and schemes to bankrupt us all as the product of a patriotic and brilliant thinker. Well, the inevitable happened, I guess: the train stopped a couple of stations short of the sort of total dicta
2 comments
Read more

April 08, 2018
Here's an article in the Washington Post today, by some guy named Alan Sloan, who the Post describes as follows: "Allan Sloan is a columnist for The Washington Post. He is a seven-time winner of the Loeb Award, business journalism's highest honor." The Loeb Award!  A seven time winner!  What sort of profound thinking gets you seven of these things?  Well, here's a sample: "Stop obsessing about the yo-yo stock market...   Enough with the stock market, already!   If you’re trying to make sense of the market, good luck to you. I know that stock market stories are one of the staples of business news — and these days, of general news, as well — and every market effect is supposed to have a rational, understandable cause.   But you know what, folks? That’s just not how the world actually works." Any idiot can see that, after years of slow growth under the last Democratic President, the current Republicans only took a year to send it into an al
Post a Comment
Read more

April 07, 2018
Funny old age we live in, huh, when the President of the United States can cause the Dow Jones average to lose close to 600 points in a single day, and the news media hardly bother mentioning it.  Until Trump moved in, this would have been a cataclysm that would have stunned the country, and brought forth screams for impeachment of a Democratic President, without even considering the several times this has happened in recent months, due to Trump's behavior.  But now?  The press is just averting its gaze, and pretending that it will all go away. Nobody in the mainstream media seems willing to point out that, even in the absence of a total collapse, this kind of volatility is a frightening sign of the kind of instability that could cause even minor events to precipitate massive economic damage.  Just on the basis of pure statistical analysis, this should be seen as a deeply disturbing phenomenon.  Instead, it is simply being ignored, by the same mainstream press and Republican part
3 comments
Read more 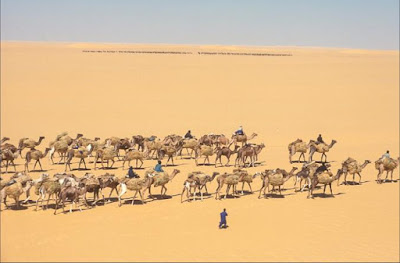 "President Trump, who claimed a "crisis" forced him to order National Guard troops to the U.S.-Mexico border, said Thursday that a border-bound caravan of some 1,000 migrants fleeing violence in Central America had broken up inside Mexico." Darn!  I was really hoping to head down to the border to get a look at that. I just hope the camels are all okay.
9 comments
Read more

I Love a Parade 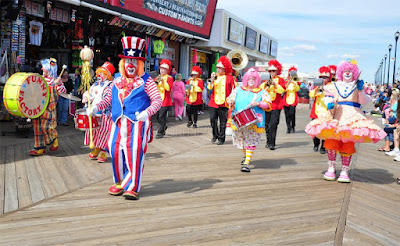 So, I remember a story from the later years of the Vietnam war, when the United States was getting its rear end kicked by the Vietnamese:  A fair number of people, with a mixture of sarcasm and seriousness, said that we should just declare victory and come home, counting on the American people, or at least the ones who voted Republican, to gladly accept a fairy tale for reality. I'm hearing lately what used to be called a "trial balloon" (don't hear that phrase much anymore, in a country whose leader's every remark is some kind of mentally deranged boast likely to disappear within hours) that this is exactly what Trump is planning to do in Syria:  Just declare that ISIS doesn't exist any more, and that all of the years of work by so many countries, united in a coalition put together by Barack Obama, was actually the result of an invisible stroke of military genius on the part of a man who knows more about war than all the generals combined.  And of course,
1 comment
Read more

April 04, 2018
So Donald Trump is rejoicing, at least in public, over being merely a "subject," rather than a "target" of a federal criminal investigation, pretending (after all the lawsuits he has been involved in, he must know better," that this is a good thing, despite his being the first President in history to rise (or sink) to this level. Well, in all the talk I have now heard about the difference between the two, I have heard one persuasive remark, which is this:  Prosecutors who have handled this sort of case know perfectly well that the minute someone is identified as a "target" of their investigations, that person clams up, and from that point on there is zero hope of any sort of cooperation or willing testimony from them.  Mueller apparently still hopes to induce the egomaniac Trump to sit down for a face to face interview, which very likely will be the biggest mistake Trump ever made, and Mueller knows that if he lays all his cards on the table, Trump
2 comments
Read more
More posts