Three or four times I have republished things which I wrote in the past.  I think this is a good opportunity to do that again.  The following is a post I wrote in October, 2015, briefly outlining the long history of the place that is now called Syria.  I believed then, and still believe, that the history of Syria presents an almost unbroken tale of violence, war, invasion, rebellion and brutality that is extremely hard for most Americans to really appreciate.  It is against this background that the current events in Syria must be understood, I think.  Anyway, here it is:

I think it is fair to say that, at the present time there is no such country as Syria any more.  I thought it would be interesting to look back at a very long history and see where this country came from, and how much of a country it ever was.  It's hard to even give a sense of this in a blog post, but I was so interested in Syria's five thousand year record of violence and disruption that I thought I would at least try to skim over the main points.  Sorry, it's long and pretty repetitive, but I hope some people will find it interesting.For convenience, I have included a map of the early Middle East, showing a number of the important cities from the period before 1000 BC. 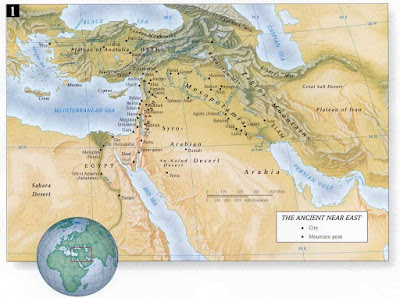 Let's start with Ebla, a civilization that grew up in the area of Aleppo, around 3,000 BC.  It didn't exist long in peace; around 2700 it began a hundred years war with Mari, another city-state in the area.  Mari won, but was soon defeated itself by a king whose rule proved very short lived.  The battles between Ebla and Mari continued until, around 2300 BC, Ebla was conquered by the Akkadians.  Ebla continued to exist as a city, subject to the same sort of violence, until about 1800 BC.Meanwhile, other parts of what is today Syria, were  dominated by the Hurrians and the Amorites. Also, large parts of the land was occupied by the Assyrians and by the Babylonian Empire. Then, in around 1600 BC, the Hittites pretty much wiped all of this out,  precipitating a period of about four hundred years where Syria was essentially a battleground between several foreign empires.  This ended around 1200 BC with the ascendency of the Assyrians, who, however, managed to remain in control for only about a century before Assyria fell apart, and most of its former territory in Syria fell into the hands of the Arameans, a semitic people from western and southern Syria who never had a unified government, but were a collection of city states.  These guys, in their turn were subjugated by a new Assyrian empire around 900 BC, which ruled brutally until around 600 BC, when, devastated by a series of violent civil wars.  they were swept away and the area again became a battleground among a whole host of foreign invaders.  The Babylonians emerged victorious, only to be ousted a few years later by Persians, who themselves were conquered by Greeks, who first applied the name Syria to this country, although they included other areas in Iraq under that name.  So, the country passed from the Greeks to the Romans to the Byzantines.This area was conquered by Alexander the Great, but remained in Greek control for little more than a generation, when it passed to the Seleucid empire.  Seleucus was a Greek, thought to be a general, who took control of the area, and established what was, for Syria, a relatively stable government, aided by Greeks, who left the overpopulate Greek peninsula to settle there.It was the Greeks who first applied the term Syria to their conquered areas in the Middle East.  To quote Wikipedia:  "During its existence, the population of Syria Palaestina in the north consisted of a mixed Polytheistic population of Phoenicians, Arameans and Jews which formed the majority, as well as what remained of Greek colonists, Arab societies of Itureans, and later also the Ghassanids."  None of the main groups were Arabs; and it should be noted that Greek "Syria " included a great deal more territory than current Syria.The Romans took over in 64 B.C.  After a Jewish revolt, the name of the province was changed to "Syria-Palestina,"  the first mention of the term Palestine, which at the time was largely inhabited by Jews.When Rome split, this area fell under Byzantine control.  I want to quote a little from Wikipedia to give you a feeling for the state of things at this point:

"Throughout the Middle Ages, Byzantine Greeks self-identified as Romaioi or Romioi (Greek: Ῥωμαῖοι, Ρωμιοί, meaning "Romans") and Graikoi (Γραικοῖ, meaning "Greeks”). Linguistically, they spoke Byzantine or Medieval Greek, known as “Romaic” which is situated between the Hellenistic (Koine), and modern phases of the language.  Byzantines, perceived themselves as the descendants of classical Greece, the political heirs of imperial Rome, and followers of the Apostles. Thus, their sense of "Romanity" was different from that of their contemporaries in the West. "Romaic" was the name of the vulgar Greek language, as opposed to "Hellenic" which was its literary or doctrinal form"

Note here that no one seems to have seen themselves as "Syrian," or have even felt that a country named Syria even existed.Well, let's move ahead to the Muslim period in Syria's history.  This is, significantly, the first time that any large number of Arabs lived there.  By Arabs, incidentally, I am using their own definition of descendants of nomadic tribes from Northern Saudi Arabia.In 640, Syria was conquered by Arabs, who shortly thereafter established the first Muslim dynasty, the Umayyads, who established their capital in Damascus.  This led to the first great cultural flowering of Islamic culture; unfortunately, in the fashion of Syrian governments since time immemorial, their corruption and despotism swiftly resulted in a series of rebellions that destroyed the Umayyad dynasty by the middle of the 700's, only a century after its founding. The Umayyad dynasty was then replaced by another Arab dynasty, the Abbasids, who, in perhaps one of their most sensible moves, transferred their capital out of Syria, to Baghdad.The Abbassids managed to hold on slightly longer than a hundred years, before being replaced with an Egyptian dynasty, following which there were several overthrows of the government.  During this period, parts of the country were controlled by others, such as the Assassins, and various groups of crusaders.Thus, things hobbled on until 1185, when the great warlord Saladin conquered the area, and shortly thereafter established the Ayyubid dynasty.  Things were not entirely peaceful, however; less than a century later, Mongols took control of Aleppo and Damascus.  Shortly thereafter, the Mamluks arrived and drove the Mongols out.  This was not the end of enemies from the East, however.  A couple of centuries later, Tamurlane invaded and conquered a large part of this area, and engaged in large scale slaughter of the population.In 1516, the Ottoman Empire conquered this area, bringing in an era of relative peace, lasting until 1831,  when Ibrahim Pasha of Egypt seized the country; he could only hold on until 1840, when the Ottomans pushed him out.  I want to show you a map of "Syria," from the Ottoman period: 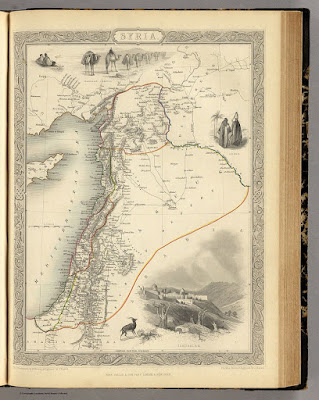 You will notice that it is by no means confined to its current borders.  In this map and others like it, "Syria" extends from below Gaza up to Turkey, and includes modern Israel, Lebanon, and large parts of Jordan and Iraq.By this time, of course, the Ottoman Empire was already entering a period of steep decline, culminating in its elimination after World War I.  As a result, control of most of the Middle East fell into the hands of Britain and France, who manipulated the area to their own benefit, with essentially no regard for the welfare or wishes of the inhabitants.  It was only after World War I, after five thousand years of history,  that a country was created having the current borders of Syria, and with that name; a country created, as was the case with Greek Syria, by foreign conquerors.In 1920, a so-called Kingdom of Syria was established by the European mandatory powers.  This lasted, in true Syrian fashion,  for five years, when it was overthrown by an indigenous revolt that was eventually put down by masses of French troops brought in from other countries.Syria and France negotiated an independence treaty in 1936, but it was never ratified by the French legislature, and things dragged on until World War II, when it became a battleground between the British and the Vichy French government. After World War II, Syria established a supposedly democratic government, which precipitated an endless series of coups and rebellions, with as many as three happening in the space of one year.  After one of the coups, the leaders eliminated all other parties, but they themselves didn't last a year more.In 1958, under the influence of Nasserism, Syria tried merging with Egypt.  This lasted for about three years, until another coup put an end to it.  By 1963, a Baathist military junta had seized control of the country, leading to Hafez al Assad, one of the junta leaders, pushing the others aside and becoming the dictator, starting yet one more Syrian dynasty, which in typical Syrian fashion has yet to demonstrate that it can survive beyond the second generation.Well, enough of this.  I must add that I have kept it as brief as I could, while maintaining a feeling of the nature of Syrian history, but I could have easily doubled or tripled what I have written here, going into many more coups, invasions and other instabilities that marked this 5,000 year history.Now, I want to talk about what all of this might mean.  Here are a few facts about "Syria:"First of all, it has virtually no existence as an actual country within its current borders.  The time since World War I is a blink of an eye by Syrian standards.  There is actually good reason for us to not even regard Syria as a real country; but rather an area defined by outsiders, whose populace has never had much interest in what conquerors have to say.Second, its history is an almost unbroken record of internal political instability and attack by conquerors. And most depressingly, the current state of utter chaos in Syria, which is seen in the West as a temporary breakdown of government, is actually far closer to what has gone on during most of Syria's five thousand year history, leading me to suspect that this area, after attempts to force a stable government on them, is now permanently reverting to its natural state as an endless factional battleground.I suspect that the world may just have to learn to live with this never ending series of Bashir al Assads, and an endless succession of Al Qaidas and ISIS fanatics, because that is just what Syria seems to be about.  And after 5,000 years of this, believing that any outside forces can change things may be a dream of fools.  A depressing thought, but isolation and containment may be the most we can hope for.