Where in the World is Carl Vinson

The disappearing carrier strike group!  Last week, Donald Trump threatened North Korea by claiming that the strike group built around the aircraft carrier Carl Vinson was on its way over there, to threaten the North Koreans with bombing raids and God knows what-all. 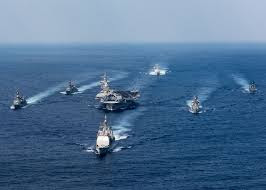 Well, there they are, but not on their way to North Korea.  Turns out they are going to the Indian Ocean, to participate in long-planned annual exercises with the Australian navy.

So the world is now burdened by two nuclear armed lying bullies, each threatening the other with war, and each lying through his teeth, for the real purpose of inciting support for war among his populace.  No matter that their attempts to maintain a grip on their positions are each directed at a mentally unstable adversary with the power to do immense harm and, apparently, without much understanding of the risks of their bullying.

As I have mentioned, it's sort of like the Cuban missile crisis, if John F. Kennedy and Nikita Khruschev had been mentally disturbed, violence prone idiots.  And isn't it interesting to see our mainstream press contort itself in an effort to pretend that it's all business as normal?
Posted by Green Eagle at 11:13 AM