April 29, 2017
100 Days Memorial Edition.  Although having our White House packed with fascists and outright Neo-Nazis sure makes the ravings of these pathetic lunatics seem less important.


Fair, as defined by rich people.


Or, in plain English, Republicans working on exactly how piggish they can make their health care bill and still ram it down people's throats.  Here's a little more from Guy:

"Dan McLaughlin snarks, "shutting down the government over healthcare is totally okay now, you guys." 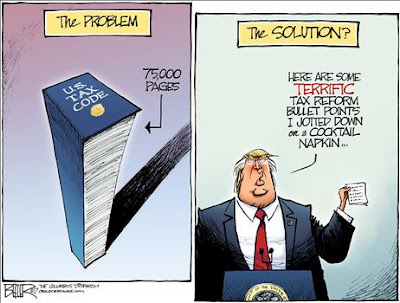 See, one sheet of giveaways to the rich is better than a hundred years of trying to produce an equitable tax system.  Because only something short enough to be read (or written) by an illiterate is adequate for Republican voters.


Katie forgot to mention that the grand jury found nothing.


Saving the human race- just not good enough for the next quarterly bottom line.


Yes indeed.  Democrats are less tolerant of things like "Let's let millions die so rich people can have more money" than Republicans are of things like "Let's have medical care for everyone."  Democrats are less tolerant of "Let's go to war, because war is fun, as long as someone else does the dying," than Republicans are of "Let's not go to war because war isn't really a good thing." A totally fair comparison, as long as you ignore the fact that Democrats' ideas are generally pretty good, while Republicans' ideas are criminal monstrosities.


Thanks, Obama.  Oops, sorry- thanks, Trump.  See, he did accomplish something in his first hundred days.

Roger L. Simon, PJ Media:  "Will Fascism Come to America through Its Colleges and Universities?"


It's already here, dickwad, and it came through people like you, not people who actually care about the truth.


A bag of knives!  No word on whether the man who set off a bomb containing eight thousand pounds of explosives in Afghanistan, to scare someone in another country ten thousand miles away, has been arrested yet.

Jim Hoft, Gateway Pundit:  "President Trump on First 100 Days: “I Don’t Think Anyone Has Done What We’ve Been Able to Do”


Well, except maybe William Henry Harrison, who got sick on inaugural day and died less than a month later, and who consequently did nothing.


And this is the point at which an uncloseable window popped up at Gateway Pundit claiming to be a message from Microsoft, and trying to extort money from me.  Happens every month or so with these right wing sites.  Funny that things like that never occur at Daily Kos or Crooks and Liars.  Almost makes you think people like Jim Hoft are getting paid to let jerks screw with your computer.


That's nice.  The only problem being that the baby-sized part of Republicans is at the other end of their anatomy.  Unless, of course, we are talking about Donald Trump, who apparently has a baby-sized part midway in between.


"Controversial," of course, among the people for whom evolution and global warming are controversial, as well as whether the Nazis were really bad guys.

"President Trump has an opportunity to reconsider whether the more than 500 million acres President Obama locked up could be better put to creating jobs and economic growth."


Jobs...economic growth.  How many times do we have to hear that crap?  We know they mean creating more opportunities for rich guys to plunder our national wealth.  They don't give a damn about jobs.

And now what may be the most shameless lie of the century:

Jack Hellner, American Thinker:  "It certainly appears that Trump has more common sense and intelligence on taxes and the economy than many of those advising him, the career politicians from both parties, the bureaucrats, the media and most economists. I am a 64 year old CPA who has been doing taxes for approximately 40 years. This is the most intelligent tax policy I have seen since Ronald Reagan’s and my initial thoughts make me believe that it is better than Reagan’s. It is a simple and logical plan that would give everyone the incentive to earn more instead of spending so much time and money trying to beat the tax man.  I believe the impetus it would give to economic growth is immeasurable."


A simple and logical plan to plunder trillions of dollars from the nation, grotesquely increase the Federal debt, steal from everyone but the hyper-rich, and leave our country in a depression.  Great work there, Trump.  It took real brilliance to get all of that on one sheet of paper.

And historical revisionism ramped up to the explosion point:

Jeremy Egerer, American Thinker:  "First They Came for the Nazis...As if the Germans themselves weren't terrified of the communists... as if the danger of a German communist uprising wasn't openly counted on and courted by the Red intelligentsia; as if the Nazis weren't a socialist counter-reaction (and what a counter-reaction!) to the hellish transgressions of ascendant communism.  The Jews were treated poorly by the majority in Russia, so sizable portions of the Jews joined the communists.  The Nazis saw what the Jews did in Russia, and so they turned on the Jews in Germany. "


Nazi apologizing and open anti-Semitism of a kind that would have been unthinkable in the United States just a couple of years ago.  Thank you, Republicans, for deliberately, and with malice aforethought, letting this monster out of its cage.

"Gone are the days of raiders taking our women and highwaymen stealing our purses.  We are instead plagued by our do-gooders and social justice warriors and philanthropists."


Do-gooders are just criminals under another name, while a war-mongering racist bully is a hero. Well, I think that's enough from this guy.

Ian Hanchett, Breitbart:  "Trump: ‘The First 100 Days of My Administration Has Been Just About the Most Successful In Our Country’s History’"


We've all heard this insane boast by now, but I just wanted to include it here for the hundreds of thousands of future historians who are going to be poring over Wingnut Wrapup to understand what happened in America.


Just in case you haven't heard yet.  Here's a little more evidence of criminality turned up by the International Common Law Court of Justice:

"The Ninth Circle Satanic Child Sacrifice Cult was believed to use privately owned forest groves in the US, Canada, France and Holland for their “Human Hunting Parties” for global elites including members of European royal families. Teens were said to be obtained by the mafia, then stripped naked, raped, hunted down and killed..Two adolescent women told the ICLCJ Court that Pope Francis raped them while participating in child sacrifices."


Let me just remind you that, if there is one thing we have learned from their behavior, it is that, whenever Conservatives accuse someone else of some abomination, that is exactly what a lot of those Conservatives are up to themselves.


And this vital piece of information from Henry Makow, someone who used to figure quite regularly at Wingnut Wrapup, until I got bored of him:

Henry Makow, Before it's News:  "Jack the Ripper” Was Winston Churchill’s Father" 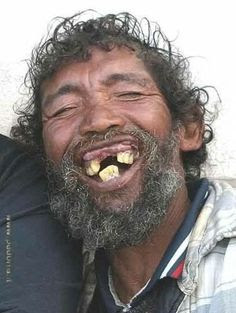 Baxter Dmitry, Your News Wire:  "Adele Caught Shapeshifting Into Eight-Foot Reptilian In New Zealand...Adele “shapeshifted into an eight-foot reptilian” backstage at Auckland’s Mount Smart Stadium after the final concert of her world tour, according to shocked fans and a reporter from the New Zealand Herald. "


Man, that does not bode well for the future of boring music. Next, Brittany Spears is going to morph into a Satanic pizza.  Curiously, I went to the site for the New Zealand Herald, which is the largest circulation paper in New Zealand, and did a search for this story.  The result?  Nothing.  Their space lizard overlords must have ordered them to take it down.

Before it's News:  "Why Does Jared Kushner Look Like He Is Getting Ready to Play the Role of the Biblical Antichrist?


A vital question.  See the evidence for your self:
Jared Kushner: 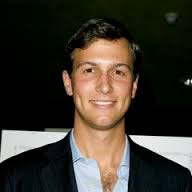 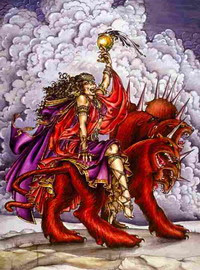 The similarity is obvious, I am sure you will agree.

Infant mortality is higher in the US than other developed countries. Maybe if anti-reproductive health care types delivered socks and services to babies born, instead of delivering malice to frightened teenage girls who got date-raped, they might actually save some babies.
April 29, 2017 at 4:52 PM