September 08, 2016
Today's Wingnut Wrapup dedicated to Donald Trump, who had this to say:

"...people don't care,” Trump said Monday afternoon in Ohio of his tax returns, which he has not released. “I don't think anybody cares, except some members of the press.”


They do, however, care a lot about being informed via an emergency bulletin, every time Hillary Clinton coughs.

So, let's just move on with a bucket of crazy:


This is all because Democrats oppose the Wall, and think that ejecting 15 million or so people from the country, at a cost of tens of thousands of dollars each, is crazy.  To Republicans, "Trump" is now the nation, and he determines what sovereignty is.  Don't bother to get up, Mr. Godwin, but the last time we saw this sort of thing was with Hitler.


This would be about the people who took a passenger plane to Cuba the other day.  And here, I was afraid it was going to be about Ferguson, Missouri.


The "dream" built on a balanced budget, increased spending on education and infrastructure, massive economic growth and, oh yeah, the beaches and the mountains.  That's not a dream, I guess, it's a nightmare.  But if this sort of thing is not enough ignorant hatred for you, try this one:

Matt Barbour, Town Hall:  "Labor Day – Burgers, Brats and Bolshevism...How’s about some commie ketchup on that burger? It’s extra red. A little Marxist mustard for your dog? What about a pinch of socialist sauerkraut on that bubbling bratwurst?


Didn’t you know? That’s why you get the day off on Monday. That’s what your Labor Day barbecue commemorates: socialism. Delicious, juicy, smoky socialism with a side of potato salad (German, of course) and a game of Cornhole"


Matt seems to have no idea that labor day was created by American corporatists as a substitute for Mayday, which really is an international (except in the U.S.) celebration of the labor movement, and just happens to be a commemoration of a peaceful labor demonstration in Chicago in 1886 that was in the process of being violently broken up by police when a bomb, from an unkown source, went off.  In the aftermath, the police began shooting into the crowds.  The incident became the pretext for a nationwide campaign of brutality against organized labor.  Well, what can you expect from a right winger, actual knowledge about what he writes?


Really, is there nothing so despicable that Republicans won't say it out loud?  Streiff speculates on how long Hillary spent on this site she supposedly clicked on, clearly trying to leave the impression that she went there on purpose.  What charming people get jobs writing for right wing websites, huh? 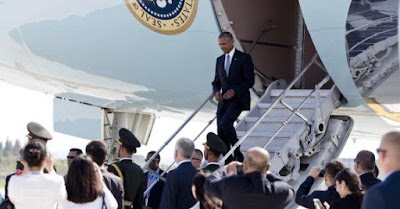 More unexcelled stupidity from the "stupidest man on the internet."  The lower staircase was provided on Air Force One specifically for situations where an appropriate landing staircase is not available, which is more and more common, as most airports that Obama would fly into use jetways, and only have staircases for small, regional planes, not for something the size of Air Force One.


To right wingers, all "reading instruction" is bad, I guess, except for rich kids who will need the ability to read to examine their stock portfolios.  The rest can get all they need to know from YouTube videos like this one, from one of the founders of Renew America:


Whatever, Michael.  Reading your piece at the Washington examiner, a phrase came to my mind again and again too:  "what the hell is ever going to become of our country?"


Well, apparently, white lies don't, or you'd save them up and wouldn't just throw them around with such abandon.

Patrice Lewis, World Net Daily:  "Why should we bring back traditional values?"


What, you mean like slavery, or hating foreigners, or beating on your wife when you feel like it?  Well, don't worry; I'm not going to bore you with what Patrice had to say.  You've heard it all before.


Well, the FBI was forced by Republicans to waste millions trying to find that the Russians had them, without uncovering much, so the likelihood that China might have them, being greater than zero, is certainly more than that.  Let's investigate China too, and then maybe Nigeria, Liechtenstein and the people on Mars!  Anything to keep the  dead e-mail story still writhing around in its coffin.


Climate change.  Did you ever think we'd have to face the day that a Communist legislature would have to teach the Republicans in Congress a lesson about facing reality?


Currently running 84.4% yes.  And she hasn't even moved in yet.  This is from a link at the following article:

Ian Tuttle, National Review Online:  "If Hillary Wins, What Should Conservatives Do?"


My suggestion?  Throw a great big self-pity party and then slit your throats.   Ian, on the other hand, is all for the impeachment thing:

"And she will not be able to distract from any of the above with good governance."


Ha ha.  She won't be able to use being a good President to distract the Conservatives from trying to impeach her, that's for sure.


She was with her boyfriend.  Too bad, guys, it was over before you could blame it on Obama.


The horror! He spent $600,000 to get people to hate refugees a little less.  No word on the $1 billion the Koch brothers are spending to "mainstream" having our country run by corrupt Republicans.

Saagar Enjeti, Daily Caller:  "What's Next For Al-Qaida After The Defeat Of ISIS?"


Confronted with the now undeniable truth that ISIS is being destroyed by an international coalition with major support from Obama, they're queuing up the boogie men, just to be ready.


No, of course I didn't read this piece of crap.  I just list it because (better late than never) this is the last garbage we are going to ever have to read from this malignant, disgusting liar, who finally had the decency to die, and relieve us of her hideous presence.

Matt Vespa, Town Hall:  "Trump: It's Possible That Some Illegal Immigrants Could Stay, But Let's Secure The Border First"


Illegal immigrants? What, you mean like Trump's wife, Melania?


A new height in "I blame Obama."  Two kids in a school in Riverside County, CA,  may have contracted leprosy, or may not have.  It's all Obama's fault.  God in heaven above, when people call Jim the "stupidest man on the internet," you can see why.


What begins?  I mean really.  Jim always likes to say "it begins," but what the hell does he think is beginning, with a picture of a cucumber that looks like a burka?  A new round of vegetable abuse?  What?  I mean, what is beginning with this?

And let me point out that Jim has seven posts up today about Hillary's coughing.  Keep focused on the important things, Jim.

Larry Elder, Town Hall:  "Trump at a Black Church in Detroit: What He Should Have Said"


Larry, being black himself, has a much better idea about how Trump could sell his racist hatred to its targets.  Of course, it's the usual: just blame Democrats for everything.  I won't bother you with the details.  Well, just one little bit:

"Reagan slowed down the rate of domestic spending -- leaving more money in the pockets of individuals to save, invest or donate as they please, not as some government bureaucrat dictated. Obama dramatically increased government spending."


Of course, Larry knows perfectly well that this is a monstrous lie, but that's what he's got.  And the solution is equally creative:


There's more, but you get it- the same Republican crap that they have been stuffing down people's throats for decades as the answer to everything; i.e. more for the rich.


Well, at last, something that Trump is better at than Hillary.


Later, after the usual calumnies against Socialists for being murderous, savage psychopaths, he claims he was just kidding about killing them all.  I guess he learned something from Trump: that if you are a Republican, you can say anything, however monstrous, knowing your intended audience gets it, but then if you just claim you were kidding, the mainstream press isn't allowed to say a thing about it.

And let's just go out on another world champion example of Republican delusion:

"In our lifetime we have never had a Republican nominee who so gets it about the rigged system."


Because that is exactly what Lincoln was about- fighting the "rigged system!"   Oh, enough already.  Bye.