The End of Civilization

Most people, even those who believe in global warming, are still caught up in thinking it's about losing shore towns in Florida, or more hurricanes and tornadoes.

That's the least of it.  Take a look at this crude  map that I colored in: 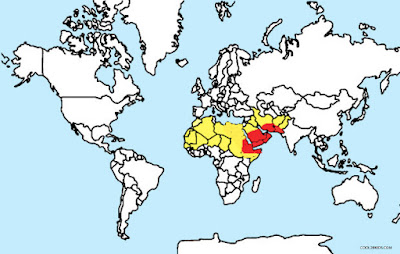 The red areas are on a track to be utterly uninhabitable by human beings by the mid to late 21st century; population by my rough estimate, 220 million.  These areas will be experiencing temperatures that will often exceed 140 degrees- enough to kill anyone who can't get refuge within a couple of hours.

The yellow areas, population a couple of billion, are areas on track to have temperatures so elevated that their agricultural base will be essentially destroyed, displacing most of their people.

By comparison, the displacement of ten million people in Syria, half still inside the country, has caused near fatal political and economic damage throughout Europe, and is a key factor in the re-emergence of the ugliest strains of nationalism in a number of countries, most notably in the United States, far from the immediate problem.  If what I describe above takes place (and please remember that, at every stage, the predictions about global warming have inevitably been less than what has actually occurred) it will basically destroy civilization in Europe, and cast the entire world into an economic disaster far beyond what happened in the Great Depression.

But no, global warming is just a dirty trick by liberals.  God forbid we should have to spend any money, or inconvenience ourselves in any way, dealing with it.
Posted by Green Eagle at 3:50 PM

You're right. The map is crude.

Look at the Caucasus Mountains. Armenia, Georgia, and Azerbaijan don't show up. All of them are included within the borders of Iran.

It doesn't surprise me, Dikran Hagopian, that an anti-Armenian bigot like you would show a world that literally leaves Armenia off the map. How fitting.

Dikram, I will make a rare exception for you here and let your comment show up, so I can explain this to you.

I needed a black and white outline world map that was in JPG format, so I could open it in Photoshop and add the color. I was very surprised to discover how hard it was to find one-virtually all of them were in color. Anyway, this one was all I can find. My comment about the crudeness referred to my coloring job, not the map itself; in fact I never looked at it outside the areas that I was referring to.

On the other hand, guy, you take things way too seriously. Really, you need to pep down a little and stop seeing enemies behind every bush.

Japan is missing a major island. My mother-in-law's second cousin's dog groomer who lives there is going to be SO cross with you, GE... brother, are you in trouble.
And Crete. What do you have against people from Crete? From Hawaii? From the northern island of New Zealand?

Seriously there was once a geometrically stylised map of Australia done for some Government logo and people in Tasmania were pissed off because Tasmania didn't appear separate from the mainland. The resulting indignation was so farcical, people of my generation still joke about it over 25 years later.

Green Eagle, take a look at the progress of the growing areas northward in the US over the last few decades. As the growing belt moves northward, the land which traditionally was called the breadbasket is becoming less productive, and with changes in moisture patterns, much less able to support large scale agriculture without significant intervention. We've seen some of the impact of drought in California, with the tug of war between cities and agriculture, and it will only become worse as it becomes more obvious that the snowpack on which they depend is decreasing year by year, and won't be sufficient for present usage patterns.

I wish I could say there is a way to stop, or at least greatly slow the change we've set in motion. Unfortunately the time to act which would see good results in our lifetime was about a decade and a half ago. The scenario in the models for 3º celsius rise seems to be on track, with somewhere around 2030-2035 as time we'll cross that threshold. As you noted, most folks are hearing about costal flooding and such as an effect of global warming, since it is already happening. The mass displacement of people, the devastation to agriculture, and the resulting destruction to civilized life as we know it is too far in the future for todays politicians to care - they'll be out of office and/or dead by the time it really kicks in - so there is not political advantage to do something now.

That original JPG map deserves a special place on Mapfail.

Among other lowlights:
*Greece and Turkey are merged into one country.
*Bangladesh does not appear.
*The Gulf of Mexico and the Baltic Sea both appear to be land masses.
*Mexico and the seven separate countries of Central America appear as one unit.
*Finally, there appears to be a giant penis superimposed over part of Central and Eastern Europe, blocking out Hungary, Slovakia, and half of Poland.

Here is something that I have been predicting for a couple of years now. It has not yet come to pass, but I am one hundred percent confident that it will be with us soon. Elements in the United States, particularly (of course) on the right are going to start building up a sense of grievance against Canada, with the intention of eventually fomenting a war with them, which we will, of course, win almost instantly. We will then be in possession not only of newly valuable agricultural land in vast quantities, but massive mineral wealth.

I spent some time a few years ago reading everything I could find about Europe in the period from, say 1870 to World War I. What I learned is that, among the European powers, war parties in collusion with the press universally spent those decades inciting public hatred against the other European powers. This hatred had grown so intense by 1914 that it was easy to lead the people of England, France, Germany and Russia into war. In fact, this factor was far more important than the assassination of Archduke Franz Ferdinand, which was nothing but a tiny spark igniting a bonfire that had been piled up for decades. Without this preparation, the populations of these countries would never have willingly allowed their governments to start a war over nothing. This shows how easy it is to drive an ill-informed populace into a frenzy.

We see the same thing in this country today, with the Republican party under Trump culminating a long process of demonizing Latin Americans. I am positive that their ignorant ire will, sooner or later, be directed toward Canada, where so many rewards for the rich lie waiting to be seized.

XKCD, in a most timely fashion, has provided a graphic:

As to your prediction, I fear you are all to right. Trump stating we should take Iraqi oil, was just another breadcrumb leading down that path. Low information populace, and the media to manipulate it will be the ultimate death of our from of democracy - particularly when the rhetoric is the old 'us vs them' phrasing. They have our oil - they just happen to have their sovereign nation sitting on top of it....

Curious that flaws in the original map attracted so much more comment than the actual point being made in the post.

The population of the area in yellow is more like one billion than two billion, but actually parts of India should probably be added (temperatures well over 120 were recorded there this summer), which would boost the number of affected people substantially. Anyway, the point is that a vast area of the world, including the region where civilization began, could become uninhabitable within a couple of generations. It could trigger further mass migrations, but most of the people in that area couldn't reach anywhere outside it. The death toll could be catastrophic.

And for those who aren't bothered by that because they don't live there, consider this. Several of the countries in the yellow area have nuclear weapons or the technology to build them. Do you think they will quietly submit to extinction because of the inaction of others, without lashing out in anger? How much are you willing to gamble on that?

Infidel, I am sure you are right about the population. When I first posted about this, it was in relation to the red area on the map, and I actually made an effort to come up with a number of people there. The second number I just guessed at, and I am sure your figure is much closer to the truth.

I must admit that, faced with a threat like this, there seem to be more people concerned with the accuracy of the world map I downloaded than the real problem, but I also understand how hard it is to focus on such a monstrous threat, about which you can basically do nothing, thee is an urge to think about anything else.