I've really noticed some results of the Republican effort to shut down their more crazy members (i.e. the base) in the leadup to the November election, in the probably well-founded hope that a couple of months is enough for most Americans to forget who has been screwing them royally for the last forty years, but thankfully for Green Eagle, there is still plenty of wingnut maliciousness to go around.

John Ransom, Town Hall:  "Here America: Have Some More Filth to Go with that Government...Yes, the Democrats are that desperate. Smacked with the guy who has made his business to lead the loyal opposition to policies that hurt the country, the Democrats did something so foul, so mind numbingly stupid and so desperate that it out Nixoned Nixon in his worst of days. And in doing so, they’ve completed the transformation from political party to caricature.  Does Rick Perry's indictment disqualify him for 2016?!!! asks CNN, while fronting for the Dems."


A wonderful analysis, except for one small detail:  Rick Perry was indicted by Republicans. Oh, and also that "loyal opposition" part.  How about "subversive traitors?'  A little more accurate in my opinion.

Town Hall:  "What Broke the Job Market in America?  We won't keep you in suspense. The most likely culprit behind the growth of part time jobs in the U.S. economy was the passage of Obamacare..."


Right.  Not the greed of employers, who moved all the good jobs overseas, and are now doing anything they can to cut the real pay and benefits of their workers, while amassing huge fortunes themselves.  No, that has nothing to do with it.  Giving people health care is what destroyed jobs.   But wait, there's more:

"And we suspect that the absence of jobs being created within that margin plays a big role in the assessment of Americans that there is and has been no meaningful economic recovery since the official end of the last recession."


"the assessment of Americans that there is and has been no meaningful economic recovery..."  Of course, there has been immense economic recovery, so the article has to resort to a meaningless assertion about what Americans think, aided by an immense Republican propaganda campaign to make them think that.  Never mind that the Dow has doubled, the Federal deficit has been cut in half, joblessness has significantly decreased, and on and on.  God, it's hopeless to fight the lies; they'll never stop.

John Hayward, Red State:  "On the 50th anniversary of Lyndon Johnson’s “War on Poverty,” Robert Rector of the Heritage Foundation posted a devastating after-action report pronouncing it “a colossal flop”


The Heritage Foundation.  Well, there's a reliable source for you.  Of course, the War on Poverty was a colossal success, drastically reducing poverty until Ronald Reagan came along and sabotaged it.  But then, if Republicans can destroy something, it was no good to begin with, right?


Well, not a new documentary, a "documentary" that some guy wants you to donate money so he can make it.  A new low for corporate shills: they now expect you to pay for them to manufacture the lies they are going to tell you.


I'm terrified now.  They've released a video!  Say, I've got an idea- how about if we send them a copy of Texas Chainsaw Massacre in return.  When it comes to chilling videos, we can still outdo them without even trying.  And if that doesn't work, I suggest they take a look at Downfall, and see what happens to people who really annoy us.  That should be chilling enough for them.


Terry Paulson, Town Hall: Where Have All the Leaders Gone?  Ronald Reagan would dish out criticism of Democrats during the day, but after 6 PM, the politics would stop, and you could find him swapping stories and laughing with the Speaker of the House Tip ONeill, the old-time Democratic politician from Massachusetts."


Ronald Reagan didn't have to deal with a party of seditious traitors.


It's always the liberals' fault.


No, it might distract them from their God-given responsibility to pander to white voters.

John Ransom, Town Hall:  "You can always tell its an Obama event by the buses. They have forced busing down to a science: Occupy, Ferguson, Climate Change, wherever common sense needs to be defeated, in come the buses."


Whatever the hell that was supposed to mean.

Labor Union Report, Red State:  "AFL-CIO Pushes Get Out The Vote For Mid-Terms Under Soviet-Style Symbol...Communism, once banned, appears to leave its mark on America's oldest labor federation"


And here it is, the "Soviet-style symbol: 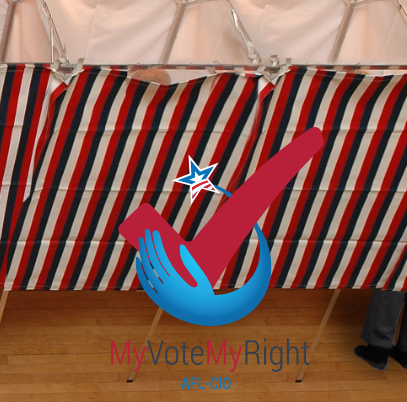 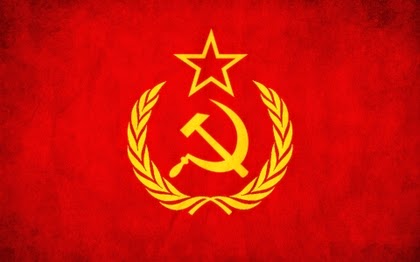 As far as I can tell, the only thing they have in common is a star.  Of course, so does this: 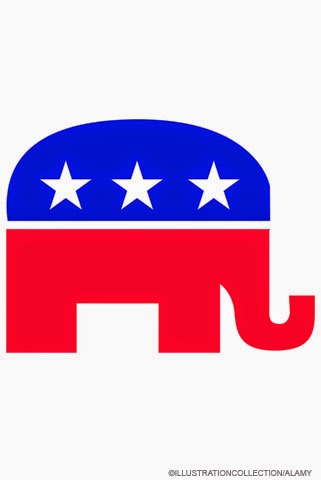 I guess whoever uses this symbol are Communists too.


Glad you summed it up for us so neatly, Rick.  Actually, you are almost right- what actually happened was that thousands marched to stop the end of civilization.  Oh, and by the way, that should read "hundreds of thousands."


Really?  These days, it seems like that's all they do.  Larry's real problem is that they insist on picking the other Muslims they are going to fight all by themselves, and don't turn the job over to Larry.

Now, the unbelievable chutzpah of Conservatives:

Steve Chapman, Town Hall:  "The Latest War Will Not Be Free...Young people may find it hard to believe, but going to war used to be a big deal. When the United States started bombing Iraq in January 1991, Americans somberly watched President George H.W. Bush address the nation, followed by live video of Baghdad being bombed. The Bush address drew the biggest audience TV had ever had...This past week, by contrast, life went on normally as U.S. warplanes and Tomahawk missiles destroyed targets in Syria and Iraq...If Obama and Congress had agreed to impose immediate new federal burdens on American taxpayers before launching this latest war, public attention would be greater and resistance would be stronger. We would at least have had a real debate."


I don't think I need to explain why things like this make me want to bang my head against the wall.

Ilya Shapiro, Town Hall:  "One thing that differentiates Holder from other notorious attorneys general, like John Mitchell under Richard Nixon, is that Holder hasn’t gone to jail..."


Gee, I wonder why that is.  It sure wasn't for lack of Republicans trying to put him there.  Maybe it's because unlike Republican Attorneys General like John Mitchell, Ed Meese and John Ashcroft, he wasn't a criminal.


Yes, a TV show trumps everything we know about reality.  As long as wingnuts can fantasize that it somehow supports their position, that is. Hitchcock, incidentally, was almost fanatically anti-political in his hundreds of interviews and public statements, never taking a position on any issue, with one exception- he did urge the United States to support England before we entered World War II.

Rev. Mark H. Creech, Renew America:  "The Psalmist wrote, "Be wise now therefore, O ye kings: be instructed, ye judges of the earth. Serve the Lord with fear, and rejoice with trembling. Kiss the Son, lest he be angry, and ye perish from the way, when his wrath is kindled but a little. Blessed are all they that put their trust in him" (Psalm 2:10-12)

There is no question this verse penned by the Psalmist refers to Christ..."


Of course, it was written several hundred years before Christ was born (if he ever was) but magical thinking triumphs over rationality any day on the right.

Clarice Feldman, American Thinker:  "Jihadis and Warmunists: Brothers Under the Skin...Climate change advocates and Jihadi terrorists have much more in common than is apparent at first glance."


"Warmunists."  Isn't that cute?  See, it's really scientists that are just like terrorists, despite the fact that it is their right wing compatriots in this country that seem to think and act like them.  Clarice remarks:

"the marchers really were warmunists -- that is, far left-wingers posing as environmentalists."


Listen Clarice, you dumb, ignorant pig, having been involved in environemntal causes since the first Earth Day, I can assure you that it has been made up of "far left-wingers" since the beginning.  They have not been posing as environmentalists, they are the environmentalists.  And they have been right every single step of the way.


Ha ha.  Because they have been the victims of centuries of racist abuse?  No, of course not.  It's because of bad parents and Marxist teachers who promote "the lie that their country is “racist."  Yeah, that's the answer.


See, it's okay for wingnuts to blame "Marxist" teachers for a black guy who cut someone's head off (not a particularly well known Marxist tactic, as far as I can remember) but it's a monstrosity to blame this kid's gun-nut mother for isolating him from his contemporaries and filling his head with God only knows what vicious anti-social nonsense.


Good thing it happened in England instead of Florida or he'd be dead now.

Are there Dick Cheney parodies with German subtitles?

Not that I'm comparing a US politician to Hitler.
I mean... who would do that...?

"More like turn it into a disease ridden poverty magnet"

The South has a;ready done that to itself. Compare the rates of Obesity, Heart Disease and Cancer in the South, so called red states to the rates of those in the so called blue states.

We all die in the end but if in the South you get die earlier and fatter than in other areas.