The Solution to Illegal Immigration

Illegal immigration.  You can count on it- when the Republicans' screaming about every other fake scandal they can think of has turned into nothing, they's start yammering on about how illegal immigrants are all coming to kill us in our beds or give us Ebola or something.  And the press will hop right in there, taking their nonsense seriously.

Of course, their only solution is to send a lot more heavily armed troops to "guard" a 2,000 mile border that is beyond any country's abilities to secure, and if they can't get the rest of us to pay for this exercise in futility, some of them are going to go down there themselves, and play soldier, like this man, a stalwart defender of our border before he murdered four people and then committed suicide. 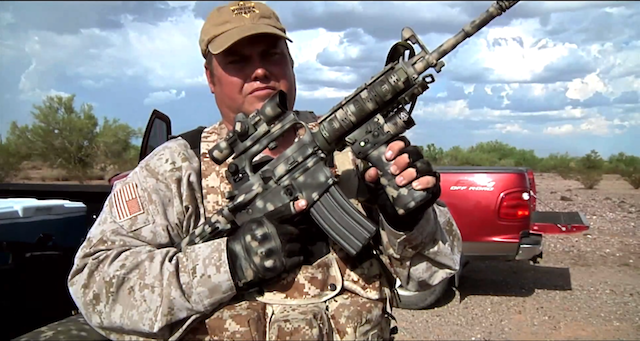 Well, here is the ugly truth:  Absolutely nothing that we do inside our country or on the border is going to stop human migration from poor areas to better ones (which hopefully still includes the United States, although you have to wonder sometimes,) a phenomenon which has existed since the dawn of mankind and which is as inexorable as the tides.

There is, in fact, only one thing that can ameliorate illegal immigration, and that is to lower the difference in circumstances between those who live here and the people who are fleeing miserable lives elsewhere.

There is, of course, the Koch brothers' answer to this reality:  just make us so much poorer that no one will want to come here any more.  This is, of course, the preferred solution of one of our two major political parties.  Unfortunately, they have succeeded in making us a lot poorer without yet managing to make us as poor as Mexican peasants.  I think it is fair to say, at this point, that though this scheme has managed to make the Koch brothers and their ilk a lot richer, it hasn't really done much of anything else that we can be pleased with.

Now, for Green Eagle's solution:  let's work to make people in third world countries a lot richer, because the more they make the less they are going to want to travel thousands of miles to work as gardeners and busboys in the United States.  My first proposal is this: let's take about a third of our absurd military budget and devote it to promoting unions in the third world.  And we must make it clear that exporting countries that suppress these unions will be subject to extreme trade sanctions when they try to import goods to the US.

And while we are on the subject of trade sanctions, I am proposing a system of compensatory tariffs, which will penalize companies that rely on subsistence wages or environmental heedlessness to keep their profits up.  Let these companies understand that they are either going to treat their employees decently and not despoil the environment, or the United States will do what it can to see that they make no more money than if they had, at least if they want to sell their products here.

This sort of action will have far greater benefit than just cutting down on illegal immigration.  It will also make it far more likely that manufacturers who want to do business here will create their jobs here too, and it will be a significant source of revenue for the Federal government.  Let us remember that tariffs were the number one income producer for the United States from the founding of this country until Ronald Reagan did away with them, both starving government and giving a huge victory to international corporations in their eternal battle against ordinary people.

Well, that's my suggestion.  Probably much crazier than just letting American workers decline into third world status, which has the added appeal that we're already on that course and won't have to change direction.

The United States government has built up an enormous amount of ill will towards it by its actions throughout the world for more than a century. There is so much distrust that exporting countries will have no need to suppress those unions. As long as the U.S. government funds those unions, the workers will avoid them on the grounds that it's just another American ploy to control them.

We should hit union-suppressing countries with trade sanctions, as Green Eagle claims, but, given the United States' international reputation, the U.S. government shouldn't be involved in funding unions abroad.

POINT TWO.
We know that there are American executives who will claim that their factories or their contractors abroad meet international standards. Under current law, such executives have no incentive to tell the truth. In the case that their companies are caught, the company pays the bill, and the executive keeps his or her illegally-gained loot. You may penalize companies all you want, but you still aren't hurting the executives.

How do we get around it? Simple. Hit the executives where it hurts. Submit them to heavy fines, and put them in jail if they engage in such behavior. Otherwise, the executives will likely fire people to get the money to pay the fines, and, if the company eventually collapses, at least they'll be long gone and avoid getting hurt.

POINT THREE.
Aren't the Republicans aware that the easiest way to get around immigration laws is to come to the United States on some sort of visa and simply stay past the deadline?

Things have probably changed in the last twenty years, but a 1993 study indicated that the largest sources of undocumented immigrants to New York State were Ecuador, Italy, and Poland.

The Italians and Poles qualify as "white." The fact that the Republicans never seem to mention them in relation to immigration indicates that they're being as racist as usual.
September 17, 2014 at 5:49 PM

Green Eagle said…
1. I hear what you are saying. I guess that my suggestion is pretty facetious, at least until the government starts promoting unions here at home. The tariff part is, I think, necessary.

2. I don't think we are going to get American business to act responsibly until we put 10,000 or so corporate executives in prison. I'm not kidding about the number- I think we really need to put the fear of God into these rich sociopaths.

3. I guess most of the Repubican agitation about illegal immigration is, like most of their public positions, nothing but red meat to throw to the greedy and hate-filled people who make up their base. Of course they don't care about European immigration- no jingoism to mine there.

Anonymous said…
why do all that when the democrats can just keep taking money from the middle class to support a larger constituency of non-contributors, except in the voting booth, for them.
Plus who doesn't love over crowed schools?
September 19, 2014 at 6:39 AM

Anonymous said…
It would be interesting to see you form unions in totalitarian countries, which people flee. Union membership in America is only in single digits.
September 19, 2014 at 8:55 AM

Green Eagle said…
Anonymous, as usual nothing but pathetic sarcasm from you that is irrelevant to the point I was making. Like any right winger, you are incapable of thinking any issue through.
September 19, 2014 at 12:48 PM