Get Ready for the Second String

September 21, 2014
This news, which, I guess, is supposed to terrify us, emerged at that "liberal" bastion and champion of Bush and Cheney's Iraq disaster, the New York Times:


"WASHINGTON — As the United States begins what could be a lengthy military campaign against the Islamic State, intelligence and law enforcement officials said another Syrian group, led by a shadowy figure who was once among Osama bin Laden’s inner circle, posed a more direct threat to America and Europe.
American officials said that the group called Khorasan had emerged in the past year as the cell in Syria that may be the most intent on hitting the United States or its installations overseas with a terror attack...
There is almost no public information about the Khorasan group, which was described by several intelligence, law enforcement and military officials as being made up of Qaeda operatives from across the Middle East, South Asia and North Africa. Members of the cell are said to be particularly interested in devising terror plots using concealed explosives. It is unclear who, besides Mr. Fadhli, is part of the Khorasan group."

Notice a couple of things about this report:  First of all, it comes entirely from "several intelligence, law enforcement and military officials" who of course cannot be named- perhaps the same ones that told us all the details of Saddam's weapons of mass destruction- the unnamed experts behind every military delusion pedaled to the American people.  Second, no one has ever heard of this organization before now, and its membership, so far as we know, may consist of one person.

A disaster in our foreign policy looms over the horizon- at least a disaster for some people.  It is that Barack Obama seems to be putting together a meaningful plan of action to netralize the latest Islamic bunch of monsters and send their pathetic 20,000 man army back to the hills.  What a tragedy that would be for Lindsay Graham, John McCain and all of the military contractors they flack for.  So, it only makes sense to have a contingency plan, and start right now scaring the American people half to death about a group that may not even exist.  That way, if (as is probable) Obama deals expeditiously with ISIS, they can pivot instantly to this group of alleged terrorists, and march right on with their demands for war.

Am I absolutely sure about this?  No, I'm not.  But the overwhelming history of the military/scaremonger caucus in this country makes it highly probable that this is what is going on.  After all that has happened since 2000, I think you would have to be a fool not to place this explanation at the top of your list.

Jerry Critter said…
You know what? Fuck them all. If they try anything in this country, it is a police action. If they do it in another country, it is their problem. Fuck them. Let the Middle East countries deal with their own idiots. It is not our problem. It they can't deal with it, tough shit.
September 21, 2014 at 8:19 PM

Magpie said…
Khorasan is a later name for Parthia and an area plus an alternate name for a city in Iran.
I just checked that again but the name was familiar to me from history I have read. Point is... it’s rather ‘evocative’.

Now maybe there is something to this ‘intelligence’ or maybe not, but I do feel like someone has a random sinister name generator somewhere - and is dialling it up an awful lot.

Anonymous said…
and while Obama is putting together a "Meaningful" plan of action ,ISIS is flourishing and growing in numbers
September 22, 2014 at 12:20 PM

Jerry Critter said…
Oh yes, Anon. Following a meaningless plan is so much better. We already tried that, which is why we are here in the first place.
September 22, 2014 at 12:57 PM

Anonymous said…
oh like going after Bin Laden?
Funny how that process was already in play, yet who took credit for that?
September 22, 2014 at 1:19 PM

Anonymous said…
We didn't need military intelligence reports to know when we withdrew our troops from Iraq insurgents and terrorists would move in to Iraq, yet, Obama had no plan to deal with that easily predictable move.
September 22, 2014 at 1:35 PM

Green Eagle said…
So, Anonymous, you are going to stick with the lie that it was Obama that agreed to withdraw all of our troops from Iraq, when you know it was Bush. You are screaming at Obama for having kept this nation's treaty commitment, while giving a pass to the guy who 1. put those troops in there to begin with; 2. failed miserably to accomplish his stated goal of bringing a decent society to Iraq; and then 3. signed a cut-and-run deal, while making sure that it didn't take effect until he was out of town and his people could blame the next guy.
September 22, 2014 at 1:56 PM

Grung_e_Gene said…
Hey leave anonymous alone Green Eagle! He served 7 tours in Iraq and was planning on going every other year for the next 25 years.

Of course with all that time over there I'm a little disappointed he actually didn't kill enough terrorists to stop IS IS from forming...
September 23, 2014 at 7:25 AM

Green Eagle said…
Well,here we go with Anonymous, who has followed the pattern of the paid troll. When I have had enough of him, he posts a few semi-rational comments that I leave up, and then degenerates into the most disgusting lies and insults. No more. I have to stop all of his posts from now on, because he is such a juvenile scum. If I accidentally delete any posts from someone else posting as Anonymous, I'm sorry (the main reason I cut him some slack when he said something not too offensive was to avoid that) but at this point I have no choice.
September 23, 2014 at 11:52 AM

Green Eagle said…
I think I'll just leave this final remark from Anonymous up, in case anyone wonders why I don't want him around. " a weak sissy, butt fucking, fag" indeed.
September 25, 2014 at 7:11 AM

Grung_e_Gene said…
They always out themselves eventually, green eagle. Always.
September 25, 2014 at 5:16 PM 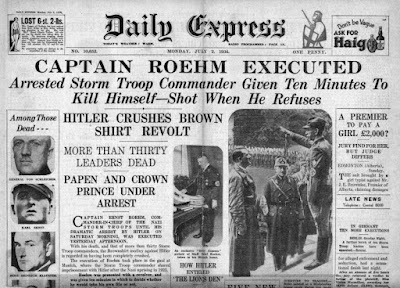