They Report- We Decide

April 09, 2012
We decide what a pack of vicious asses they really are.   Courtesy of Little Green Footballs, which has been all over this story, here is a shot of the website of the Orlando Fox affiliate, reporting on the neo-Nazi group which has taken it upon itself to patrol the streets of Stanford, FL: 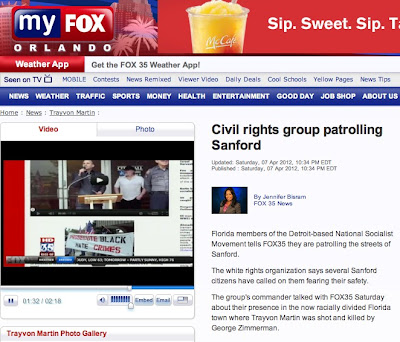 Yes, the self-styled Nazis in the "National Socialist Movement" are now described by Fox as a "civil rights group."  This would be the same Fox which constantly describes blacks and liberals as racists.  There is just no level of despicable behavior that right wingers will not willingly sink to.

the yellow fringe said…
Their services in this matter carry as much value as the drunks who piss in the alley to keep the fire hazard low.


And all the commentators from NBC swore to it.

"Look what was there but isn't any more"

or "Look at this but not that"

Sounds like that 50,00 square foot bldg in Chicago being used for Obama's re-election is in full propaganda mode.
Must be nice to have tons of cash to use for smearing.
April 9, 2012 at 7:34 AM

In the words of the general, "You can't handle the truth."
Do you have a shred of fact to back up your claim that my post is lying propaganda? Because it's not. Yeah, eventually the Fox station changed this post, but this is a capture of the original. You owe us an apology for your baseless smear.

You are defending someone who regards Nazis as a civil rights group. Can't you see what a scum that makes you out to be?
April 9, 2012 at 8:47 AM

Anonymous said…
I see no poof this article was accurate either. And from Media Matters past I can probably guaranteed it was conjured up by them. Especially since the owner of Media Matters grew up in a society where media propaganda was widely used. Speaking of Nazis
April 9, 2012 at 9:55 AM

Grung_e_Gene said…
Anonymous, I don't understand your quotes. who over at Media Matter said those things? George Soros?

Green Eagle said…
Anonymous, give us some examples of Media Matters lying. I don't think you can do it, and I know that I can give you hundreds from any major right wing "news" source.

As usual, Anonymous trolls don't know what they're talking about.

That doesn't stop them from spreading falsehoods by repeating their indoctrination.

In the Orwellian world of the radical Right, ignorance is strength.

Media Matters was started by a former Republican. He understands how deceptive the Right needs to be in order to convince people to vote against their interests in favor of the economic elites' agenda.

Dave Dubya said…
Especially since the owner of Media Matters grew up in a society where media propaganda was widely used.

Green Eagle said…
And of course, as any rational person would have expected, Anonymous has managed to come up with nothing to support his baseless smears against Media Matters.
April 11, 2012 at 5:30 AM

To call a bunch of neo-Nazis THAT, of all things, in this context...

Green Eagle said…
I'm sure you are right, Magpie, although with the added benefit of throwing some gratuitous red meat to their base, who love nothing more than to show liberals how little they care for the truth when it stands in the way of more tax cuts.
April 12, 2012 at 6:13 AM