Why Are We Forced to Pay for This?

April 21, 2012
This story has been in the news for a couple of days, but here is part of an account of it from Daily Kos:

"No walkback for Bishop Jenky and his 'Hitler' claim

After Catholic Bishop Daniel Jenky compared the president of the United States to Hitler and Stalin, you'd think that maybe someone in the church would tell the good bishop to ix-nay on the itler-hay already. No, proposing that your church follow the same laws as the rest of the country is not an insult on the order of genocide; if you think so, the problem lies more with you than with the United States, where the issue of "do hospitals founded by specific religious groups still have to follow employment laws" has been fairly settled for a good long time now.

No such luck. There will be no reprimand from Jenky's superiors. On the contrary, his archbishop understands the dear bishop's consternation at having to follow laws and having to watch as non-Catholic employees are allowed to be dirty, dirty sluts"

Why are the American people forced, through tax exemptions, to spend billions of dollars subsidizing what is probably this nation's largest source of moral pollution, the Catholic Church?  I know that our gutless leaders don't have what it takes to do the right thing, but it should be a source of endless outrage to every decent person that this organization is allowed to pose as a force for good in the world.

Just to disturb you a little more, here is a photo of this filthy scum: 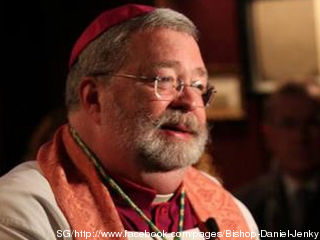 Sorry to judge a book by its cover, but is this guy not a poster child for the sort of degenerate old white male ass that have been polluting our national discourse for far too long?  Who would listen to this guy's advice if he was your uncle, let alone promote him to a position of supposed moral authority?

Anonymous said…
ALL organized religion is a political entity and should be treated as such.
April 21, 2012 at 9:10 AM

Green Eagle said…
Yes, in a sense that is true, but not all organized religion has the Catholic Church's two thousand year history of tampering with civilian government in the most malignant manner, coupled with a history of moral outrages that leaves me stunned at the idea that anyone takes this religion in particular as a source of guidance.
April 21, 2012 at 11:56 AM

mastercynic said…
Not all organized religion has a documented two thousand years of history, but one could point to muslim rule in any number of nations, particularly Palestine and, of course, the Jewish founding of Israel, the church of latter day saints in Utah and the passage of prop 8 in California, the unfortunate founding of this country by Puritans, etc., etc., etc...

Why not treat their emissaries here as agents of foreign and hostile powers?
April 21, 2012 at 4:01 PM

Green Eagle said…
I didn't know that the Jewish founding of Israel involved lots of child rape.
April 22, 2012 at 8:18 AM

Anonymous said…
"Sorry to judge a book by its cover, but is this guy not a poster child for the sort of degenerate old white male ass that have been polluting our national discourse for far too long? Who would listen to this guy's advice if he was your uncle, let alone promote him to a position of supposed moral authority?"

It was fun to find Pharyngula on your Blog List, since PZ Myers is Jenky's double.
http://freethoughtblogs.com/pharyngula/about/
April 23, 2012 at 8:42 AM