This is Sure to Help a Lot

This story, from the Miami New Times:

"Armed Neo-Nazis Now Patrolling Sanford, Say They Are "Prepared" For Post-Trayvon Martin Violence...Neo-Nazis are currently conducting heavily armed patrols in and around Sanford, Florida and are "prepared" for violence in the case of a race riot. The patrols are to protect "white citizens in the area who are concerned for their safety" in the wake of the Trayvon Martin shooting last month, says Commander Jeff Schoep of the National Socialist Movement."
Only trying to do their best to make this a better country, I'm sure.  Here's a picture of some of these jackasses on patrol: 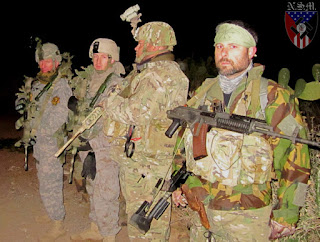 Ain't that sweet.  This is a good chance to repeat something I've said before:  When these guys get the race war they want so badly, and they find themselves fighting with the Crips and Bloods, they are going to be running back home crying for Mama in about five minutes, no matter how much camo they are wearing and no matter how many AK's they've managed to sling around their necks.  I've got news for you, idiots:  Gang guys aren't going to dress up like it's a Halloween party before they come for you.  They're going to shoot you before you even see them.  And then rob your corpses and walk away laughing.

Don't worry- I'll keep my eyes open and let you know tomorrow or the next day when they do.

Hey, BTW, when did these guys change uniforms from the all white sheets to the army surplus camo?

I guess it cuts down on their dry-cleaning, especially since those fer-in-eers run those dry cleaning shops!

Funny looking liberals, I have to say.

"National Socialist Movement" means these guys are liberals, right? As the racists and radical Right say, "It's the left that is racist".

well maybe they felt the need to protect Zimmerman's parents from Black Panthers and others who are out to fill the "bounty' now that Spike Lee and asshole Rosie Barr gave out their address.
Ok I am going to revert to this-"YOU STARTED IT"

Let's cut right to the point. Whites started "it" by bringing millions of black slaves to our shores, whites have kept it up for several hundred years now, and based on what we've seen lately, they have no intention of ever stopping.

Now, readily available film of the alleged New Black Panther harassment during the 2008 voting seems to show these idiots taking orders from Republican operatives. I suspect the same thing is going on in Florida.