Let's just start out with the most preposterous right wing lie of the day:

And just in case you think I am kidding about this: 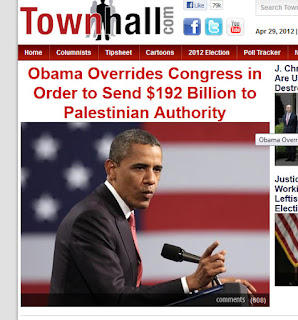 Daniel Daugherty, Town Hall:  "Charles Krauthammer: “There was No Reason to Make [Bin Laden Ad] Negative"...Of course, as shown in the segment above, Charles Krauthammer is referring to the slanderous attack ad released by the Obama reelection campaign that suggests Mitt Romney wouldn’t have given Operation Geronimo (the killing of Bin Laden in Pakistan) the green light if he were president.  What a disgrace. We’ve certainly seen a number of negative campaign ads this election cycle, to be sure, but none have been as cheap and unsettling as this."

"I do not concur in the words of Barack Obama in a plan to enter an ally of ours... I don't think those kinds of comments help in this effort to draw more friends to our effort."-- Mitt Romney, quoted by Reuters in 2008, on the United States entering Pakistan to kill Osama bin Laden.

This incident is a sample of the currently developing Republican 2012 electoral strategy to shout down any attempt by Obama to point out anything negative about Romney.  The Republicans know they have just bought into an unappealing loser, so they are going to scream and whine every time someone points this out.

Well, at least you aren't broke, Doug.  No, you get paid plenty to fabricate lies and smears on behalf of corporate America.  I bet you are so proud of yourself, to be doing so well in hard times. It's a great moral weakness on the part of those other young people that they won't whore themselves out to the rich, like you.

What caused the Secret Service to go to prostitutes, according to Emmett?  Bill Clinton and affirmative action.  One blow job and they threw a century of standards out of the window.  And it's all the Democrats' fault. As usual.

Ion Pacepa, PJ Media:  "The Cartagena sexcapade dramatically proves that the Democratic Party’s new anti-Americanism has even started eating away at the patriotism of one of the most patriotic American institutions, the Secret Service"

Gee, and here I thought it was Bill Clinton's blow job.

Oh, we understand it, Rand.  It just makes us sick to our stomachs to think about it.

You know what?  I don't even want to know what this was supposed to be about.

Two theories:  the one the scientists have, and the one paid for by the oil companies.  Take your choice.

Fay Voshell, American Thinker:  "The European Union has set the entire continent on the fast track to a materialistic hell"

Astute Bloggers:  "OBAMA BRAGS ABOUT GETTING OSAMA, BUT HE LOST THE MIDDLE EAST"

Because the Middle East is only won when it is ruled entirely by dictators.  Turning Middle Eastern countries over to their own people is SUCH a foreign policy disaster.

No.  No thanks.  Deal with it yourself.  Really, the rest of us don't care.

Well, since it's mostly really bad and stupid, it probably is.  And by the way, what could be more "conservative" than writing an article about music that normal people stopped listening to about forty years ago?

Lloyd Marcus, American Thinker:  "Folks, there is a downright scary connection between ObamaCare and the Trayvon Martin case."

Really.  That's what Lloyd has to say.  Let's not get too concerned about why- you already know it doesn't make any sense.

Ann Romney:  "I love the fact that there are women out there who don’t have a choice and they must go to work and they still have to raise the kids. Thank goodness that we value those people too. And sometimes life isn’t easy for any of us."

Admittedly, it's a bit easier when you have a car elevator, but then let's not quibble over the details. But Ann loves the fact that lots of women have to actually have a job and raise children too.  I bet she wouldn't love it so much if it were her having to do that.

By daring to go against the will of Catholic priests, the one group that apparently cares more about women than anyone else on earth.  After all, if it weren't for women, where would teenage boys come from?

"Did the Secret Service have  WOMEN waiting for Obama when his wife was not with him?????"

I need hardly point out how much more likely that became, when Breitbart.com put four question marks at the end there.  It's almost a certainty now.

Madeline Crabb, Renew America:  "Have we sealed our fate? Yes and no. We are already at the edge of the proverbial cliff. One more "crisis" might push us over. Of this we should be mindful because Presidential Advisor, Rahm Emanuel, likes crises, and will manipulate them, no matter how dire, to promote Obama's cause of the week."

Oh sure...Madeline, Rahm Emmanuel left the White House in October, 2010.  Look it up.

Andrew Klavan, Pajamas Media:  "You no longer worry about pollution, because you know that once free people become annoyed by it, other free people will fix it with cleaner fuel-burning methods and filters. Where are the pea soups of London? Where are the smogs of Los Angeles?  So screw Earth Day. "

Where are they?  They went away because of GOVERNMENT REGULATION, you ignorant, lying dick.  "Free people," i.e. corporations, never did a damned thing to deal with pollution that they weren't forced to do.

No, they're actually nuclear scientists.  Or maybe professional hockey players.

Cal Thomas, Town Hall:  ""The war on terror is over," or so claims an unnamed senior State Department official, as reported by National Journal's Michael Hirsh"

This story has been all over the wingnut world the last couple of days.  An "unnamed" guy says something, and it is an opportunity to savage Obama and everything he ever did.  If you've got nothing, make something up.

That's it- aborting children.  That's all they care about.  What happened to Communism and Jihad?

And while we're on the subject, what happened to a shred of self-respect on the right?  Nothing is too stupid for them.  They wallow in it.  They're addicted to stupidity and lies.  And like meth heads, ninety percent of them are hopeless.  Really, there's nothing we can do but wait until they get old and die, and hope the next generation isn't so horrible.

Anonymous said…
I can't help but note that the Secret Service was never problematic when it was part of the Treasury. Now, though, as part of the morally bankrupt Republican creation the Department of Homeland Security they seem to feel free to imitate their masters - those that spy on their own citizens and share data with corporations in order to prevent further terrorist activity - like the Occupy Movement.
April 29, 2012 at 5:22 PM