February 03, 2018
Today's post respectfully dedicated to Sean Hannity, who made the above remark about "Watergate times a thousand."  And he's right, too- in a way.  Watergate, as criminal as it was, never involved open treason, which Trump has clearly committed, and that makes this a thousand times worse than Watergate.


And let me note here once again, how common a tactic this is for Republicans: accusing their opponents of exactly what the Republicans themselves are doing.  This is often written off as projection, but that is wrong.  Projection is a psychological problem, and that is not what is going on here.  Republicans, who know perfectly well that they are constantly up to every sort of evil, long ago adopted the strategy of accusing Democrats of everything Republicans themselves do wrong, as a conscious ploy to muddy the waters through convincing people that every politician acts that way, so there is no reason to hold Republicans responsible for their crimes.  That is not projection, it is just common, garden variety lying.


Hannity continues, claiming to be talking about the investigation into Trump, but in fact very accurately describing the actions of Trump and the Republicans around him, including Hannity himself:

“Now that type of abusive power, that type of corruption, that shredding of the Constitution––it is unprecedented in American history”


And a clear runner up today:  Devin Nunes himself, who, when asked if he had actually read the FISA application on which he based his "memo," replied


Responsible government at its best.


So, the reaction of the wingnut world has been one hundred percent predictable, spewing out the same lies about this investigation that they have told for months now, regardless of the pathetically hollow contents of the memo itself.  And what follows is a representative sample; you didn't think Green Eagle was going to let you off the hook merely because it's  nothing but a pack of transparent lies, did you?  Remember that as always, a hundred or a thousand times as many people are going to read this propaganda as are ever going to muster the responsibility as American citizens to examine the source material to find out the truth for themselves.  And thus, despite all the derision of decent people, the memo wins, like it or not.


First, a little sample of Conservative "humor" on the subject: 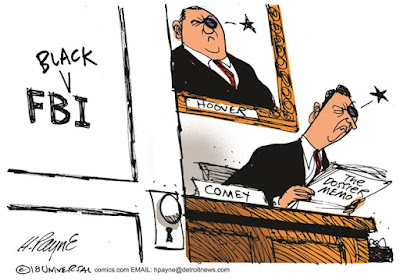 Because telling the truth about anything earns you a black eye, as far as Republicans are concerned.  One little truth and it might upset the whole apple cart- people might get a taste for it, and then what would become of us?


No it doesn't.  In fact, if anything it proves the exact opposite.  And by the way, the Dossier was produced by one of the foremost experts on Russian spying in the world.  But we are expected to ignore it because it says bad things about little Donny.

Pat Buchanan, Town Hall:  "A Never-Trump Press in Near Panic"


I.e. fascism.  A wonderful thing according to Michael.  Basically, this piece was designed to tell people that didn't listen to Trump's trashy State of the Union speech that it was the greatest specimen of statesmanship in world history.

Streiff, Red State:  "No, Internet, the Nunes Memo Does Not Show the Memo Was Not the Cause of the Russia Probe"


What, you are surprised that Nunes lied about that?  What else is this pathetic tool there for?


Man, if you believe that, you are some kind of stupid.  Sad to say, that is exactly what the Republican base is.  Or to be more specific, it's every kind of stupid.


A complete lie, of course, but tens of millions of Republican dupes are going to believe it.

Debra Heine, PJ Media:  "Report: There Are Four Explosive Revelations in FISA Memo That Have Not Leaked"


This is from the day before the memo was released.  Turned out to be totally false, of course, but if you are waiting for a correction from Debra or a single other person on the right, don't hold your breath.


Russian campaign interference in the United States on the other hand?  Who cares?


And don't ignore this malignant threat.  There is a point in every dictatorship where people who stand up for the truth get thrown in jail, and with the heat growing on Trump and the Republicans every day now, that time may not be far off for us.

And now, this amazing picture from Gateway Pundit: 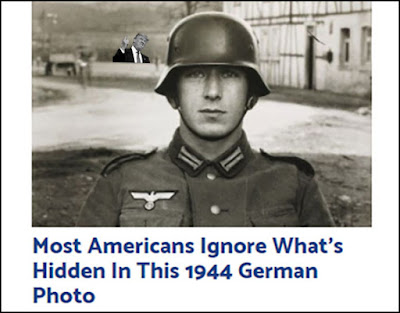 Well, okay, Green Eagle might have tampered with it a little.  So sue me.


Larry Klayman, the founder of Judicial Watch, once sued his own mother.  The case was thrown out of court.  Too bad, Larry.  This is also the same Larry Klayman that swore to show up at the White House with two million armed protesters to throw Obama out of the building.  About fifty people showed up.


Because the House memo worked out so well.


And what fair person could ever think Trump would do anything to undermine the Mueller probe?  Boy, that Schiff- what a loon, huh?


No it doesn't, not by a hundred miles, but once again, a thousand people will read this for every one who actually spends the five minutes necessary to actually read the memo, and who has a memory long enough to see what a pack of lies it is.


Which has absolutely zero to do with whether the memo was true or false, but then a central theme of this entire bogus controversy is the unstated Republican principle that anything that has the slightest connection with Democrats is automatically totally inadmissable, regardless of whether it is true.  The notion seems to be that if a Democrat discovers something wrong about a Republican, their revelations are illegitimate; and this is because, to Republican propagandists, every Democrat is a Commie traitor.  No concern whatever when half of the leaders of their own party are in league to sell us out to Russia.


So a report from a man with a good claim to be the world's foremost expert on Russian spying should have been just ignored because it wasn't "corroborated."  Corroborated by whom, I don't know, but when something this huge is looming over the White House, maybe the President should be told about it, while intelligence agencies are trying to check it out.


Caring about treason in the White House makes you a mouth breathing idiot, according to Breitbart.  Before moving on, I want to note the accuracy of my observation a few weeks ago that the presence of Steve Bannon at Breitbart was a very bad thing for them, as he forced them to rein in their lunacy to the point of destroying any amusement value the site had, in order to secure his position as a Trump administration player.  As I predicted, they are now regaining their stature as kings of madness.

And one final comment from Breitbart, although this remark features in many other right wing articles about the memo:

"Steele — although portrayed as a “boy scout” by Fusion GPS co-founder Glenn Simpson — had personal bias against candidate Donald Trump, telling senior Justice Department official Bruce Ohr that he was “desperate that Donald Trump not get elected and was passionate about him not being president”


Well, if Steele didn't feel that way, he was an ignorant fool.


And what else do you expect him to say?  He'd lie about it just for the hell of it, even if it meant nothing, like the number of people that listened to his pathetic speech the other day.

Cortney O' Brien, Town Hall:  "GOP Rep on Intel Committee: I Was in the Air Force. I'm Not a Traitor."


Benedict Arnold was in the army.  There was no air force back then, or maybe he would have flown an A10 Warthog over the battle of Saratoga.


And it just goes on and on and on...thousands of articles at hundreds of right wing websites, and all lies; and nothing can ever stop it.  Thankfully, Green Eagle can stop repeating it, and this is the point where he does that.  See you soon, unfortunately.