February 14, 2018
This is an unusual edition of Wingnut Wrapup, so let me explain:  Within a couple of hours of the Florida school shooting today, in which 17 were killed, Gateway Pundit, one of the most malignant right wing websites in existence, published a post claiming that Nikolas DeJesus Cruz, the shooter, was a registered Democrat and lover of Islam.  This turned out almost immediately to be a total lie, based on some of the shoddiest journalism ever seen.  So, Gateway Pundit just changed the entire post to hide their depraved indifference to the truth.  Unfortunately, they did not also purge the comments section of this post, which quickly amassed hundreds of comments.  What is below is a random sampling of those comments; for every one I list here, there are dozens more just as malignant.  Normally, I do not include remarks from comment sections in Wingnut Wrapup, because, honestly, they just make too easy pickings.  But I think I will make an exception today, because it is important to see just how hate filled and deranged these people are; this is what we are up against, and these people are utterly unreachable by reason or pleas for decency.

"If all Republicans carried concealed, you wouldn't see so many Democraps killing our kids and other people."

And hold on, because this sort of thing is going to go on for a while.  It's going to be a rough ride.

"he is pure COMMIE KKK HATE FILLED JIHADI DEMOCRAT. OWN IT!"


I wonder, now that we know the truth, if people like this are going to be owning it now, and admitting they were totally duped by right wing propaganda.


Like all the gang guys who are Democratic precinct workers, right?  Because when there is a murder in Chicago, the first thing they check is what political party the murderer belonged to.

"What will be really interesting will be if he turns out not to be a citizen yet is registered to vote."


Sorry, he is a citizen and he's not registered to vote, as far as we know at this point.  So grow up and stop your fantasies already.

"I would no longer be surprised if Comey and the FBI hired this delusional liberal for mass murdering, to give the corrupt crminals room to change the subject. It makes no sense, but a soft coup is equally stupid. Can't count out Obama or Hillary."


You wouldn't be surprised, because you are a moronic, vicious, hate filled pig yourself.

" he's a member of the Laguna Beach branch of antifa"


Based on the following image, of someone else,which is flying around the right wing web world within hours: 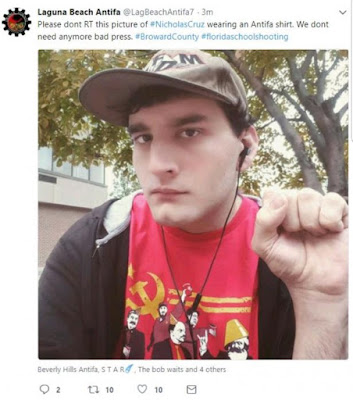 Funny, I thought Laguna Beach was in California.  I wonder how the guy got in the Laguna Beach branch of Antifa.

"Yeah, don’t they call this a False Flag?"

"The fact he enjoyed covering his face and was a registered Democrat points to Commie/Islamo/Antifa, but we will wait for the facts."


Needless to say, they didn't wait for the facts.  They just went with the lies.  Surprised?

"This is likely a 'dreamer' who became a mass murderer. Thanks Obama."


Thanks, Obama...  Well, we knew that was coming.  Sort of hard to believe that people actually use that phrase seriously any more.

"Leftist public school taught him everything he knows and believes."


And here I thought that leftist public schools taught kids that they had no right to own guns.

"I would expect the caption to that photo would be something like:"Antifa member Nicolas de Jesus Cruz proudly wears his war booty from the previous evening's protest at the Trump rally, where he beat an elderly Trump Supporter, threw that person to the ground, and stomped on the person's head repeatedly, before taking that Trump Supporter's MAGA hat as a souvenir of the event."


Right.  That is what you would expect, because you are as deranged and hate filled as he is.

"I knew he was Hispanic! A follower of Allah too. Definitely makes him a DEMOCRAT!"


Fellow students say he hated Islam.  And he was not Hispanic.  He was a white guy who was adopted by Hispanic parents, who are both dead.  So I guess that definitely makes him a REPUBLICAN!

"Another programmed killer of the Democrats."


And who were the other ones?  I've never heard of them.

"Most likely a Democrat False Flag. These type tragedies tend to happen when news is going VERY BAD for Democrats & if they're not crashing Amtrak trains they're creating tragic mass school shootings. As 'Q' has said, these people are EVIL."


False flag.  God knows how many people already have made up their minds that this is true.  And by the way, the train crashers this guy is referring to were certified right wing terrorists.

"The problem is schools can’t even expel students anymore"

The guy was expelled, dumbass.  That has been in every story about him.  What the fuck are you thinking about?

"Blame it on Obama. Obama made it difficult to own short barrel rifles...something each teacher should have strapped to his back in class"


Right, that would make school such a better place.  Maybe strap a couple of swords there too, like Geralt of Rivia.

"Democrats are to blame for this because all they do to is preach hate."


Well, enough.   And there is so much more, all within a few hours of the shooting.  How can we ever deal with these people?

And please remember that, the Trump administration, while engaging in almost daily attacks on CNN, the New York Times, the Washington Post, etc.  has granted press credentials to this hateful, miserable website.   This is a sick time in our country, and there is no sign of a way to set things back on the right track.


Update:  We now learn that the "Republic of Florida," a white supremacist militia, has admitted that Cruz participated in "paramilitary drills" that it ran.  Presumably, he learned some of the tactics he used in the school shooting from those drills.  So, as anyone might have expected, not only are wingnut claims that he is a Democrat completely false, but he is one of their own.  I doubt that you will see much coverage of that fact in the right wing press.

And just to emphasize the fact, here is the lead headline at the moment from the Washington Post:


I wonder if the government will bother to investigate how much of that "chilling precision" he learned from his white supremacist "paramilitary drills."

One Fly said…
"This is a sick time in our country, and there is no sign of a way to set things back on the right track."

That is probably an understatement. We are at the culmination of three decades of intense preparation for when it came together and it did.

The media has changed much of our society's thought process and values to something other. There will be no going back with these people nor will the 1% media change. They could be a savior but it ain't gonna happen.

Get better?? Not in my lifetime.

Have to mention how great the hate is for the Left. These people want to hurt us they really do.

Flying Junior said…
I clued into this phenomenon quickly via my fave rave blog, the venerated Field Negro.

It was a little bit pathetic to see the resident trolls Mynah Bird this tired meme of mass murderers always associated with Antifa, BLM and the democratic party. But they were buying it and linking to RW fantasy alt-news sites, including your laughable image of Laguna Beach Nikolas. I actually googoled image to see a picture of the real guy. They looked similar, but he had thicker eyebrows. How come nobody told me about the Antifa T-shirt? After this post I'm going to the official Antifa Store to purchase some gear bros. Do I have to pay dues to be official Antifa?

So last night I was fucking with them just for laughs trying to get a little troll love. But tonight as their arguments are being universally proven false by presumably even the semi-respectable RW pundits and FOX, they are strangely silent. They are not so Quicksdraw McGraw on the fact that the shooter was a Jewish, BLM, Antifa, #Resist guy.

They really don't like the Instagram avatar with the face bandana and the MAGA hat. Don't confront these guys with that. It's just not fair.

I still get most of my news from blogs even though the golden age has ebbed somewhat. B-listers are the only news source that I need other than my local newspaper, may it ever prosper. It's still better than TV.
February 16, 2018 at 1:23 AM

Seven times for seven minutes that Trump spoke without saying the word.
February 16, 2018 at 2:48 AM