A Little Information About the Great Crash of 1929 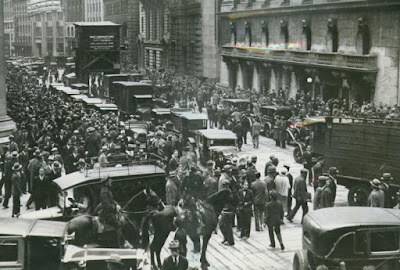 I'll tell you something that I always believed until I started reading about the 1920's and 1930's, and it has to do with "Black Tuesday."  That was October 29, 1929, the day we were taught that the stock market crashed, precipitating the Great Depression, the greatest economic collapse in human history and a direct cause of World War II.  Isn't that what you, like me, were taught in school (if the subject was even mentioned?)  Even at the time, this account loomed large: 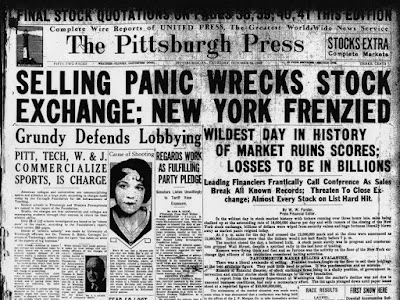 This is a subject which it might be profitable to examine, given that the Dow Jones average, which closed at 26,616 just a week ago, closed yesterday at 23,860, a loss of just over 10% in a week.  Yes, it was up a little today, but is that reason for comfort, or on the other hand, was the recent decline a reason for great concern?

I think it will be useful to examine exactly what did happen in 1929 and subsequent years.  Here is a chart of the Dow Jones average from that period, showing inflation adjusted numbers.  The data are by month, and I have added numerical information for some key months: 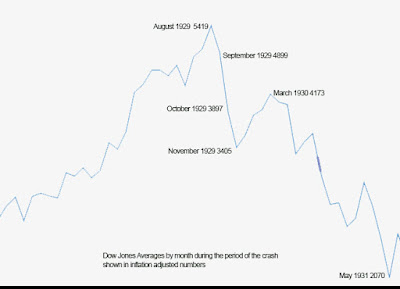 And here is a little table of these numbers, with percentage values of the peak:

Here is what I want to point out:  The Stock Market Crash of 1929 did not happen in a single day; it was a phenomenon spread out over a long period of time.  In fact, as you might be able to see from the chart, there was another minor collapse before the big one, hitting a low point of 4312, in May of 1929.  The real crash began in August, hitting a temporary low point in November of 1929, at which point the Dow had lost over a third of its value.  Even after Black Tuesday, there was tremendous pressure from the bankers and other "authorities" to deny what was happening, as you can see from the front page of the New York Times of October 30, 1929: 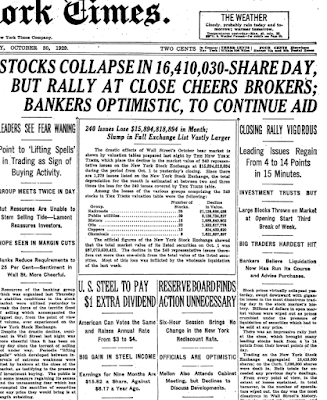 After this, as you can see, the market rallied, if you can call it that, hitting a temporary number of 4173 in March of 1930, before beginning its truly catastrophic collapse, bottoming out in May of 1939, at a value of only 38.2% of its 1929 high point.  The crash, in other words, was not a product of a single disastrous day, but under Republican economic stewardship continued for two years.

I think it is fair to say that everyone in 1929 should have seen the May decrease in values as a sign of serious economic instability, but instead, they just ignored it and got back on the party train.  What we have seen in the last week is certainly comparable in extent to the May, 1929 collapse, and was certainly, given its short duration, worse than what happened in the first month of the real 1929 crash.  I am not an economist, and so I am not making any predictions here, but I do believe that, if you are going to look to the past for knowledge, it is best to have that knowledge straight.

Now, there is one more thing that I have to deal with in connection with the 1929 crash; and it is the myth so vehemently forced on the country afterwards, that nobody knew that the crash was going to happen.  In fact, many economic experts predicted, for several years before the crash, that it was inevitable, but nobody in government or the financial world was willing to take the blame for pulling the plug on the gigantic 1920's party, in which everyone thought they could get rich without risk.  Of course, the naysayers are being ignored today, by a government and a financial industry that will interpret the worst fiscal fever as a wonderful specimen of endless growth.  Will it all end the same way as it did in the 1920's?  This is a prediction I will make: if "irrational exuberance," i.e. unrestrained greed, continues to be the governing principal of the day, it certainly will be.


In closing, I want to recommend a short book, which is the only economics book I have ever read that can be described as a "page turner."  It is "The Great Crash  1929," by John Kenneth Galbraith.  A great read, and you will really feel like you have learned something when you are done.  If you want more, I suggest "The Crisis of the Old Order: 1919-1933," which is the first volume of Arthur Schlesinger's "The Age of Roosevelt."  These are both available on Kindle, the second one for free, believe it or not.  The two works will serve to utterly devastate much of the fiction about the crash which those who stand to benefit from the behavior that caused the first one, have spent endless effort spreading in the last ninety years.

This has been my understanding on where we are right now:

The long term value of a company is quantified as a multiple of annual profit - price earnings ratio. Wall Street has been valuing companies at too high a ratio. Other stock exchanges not quite so high.
I mention this because while the US is the world's biggest economy and anything that happens there has flow-on, it doesn't necessarily shake everyone else up to the same degree if their average price earnings ratio was lower, because it means local stocks are not so overvalued.

What the Trump regime has been doing is creating inflationary pressure where inflation has been contained for a while. Nothing scares like the spectre of inflation, short of war or disaster.

To arrest it interest rates will go up. It's the only trigger that can be pulled along with the end of stimulus.
Traders act on shorter cycles and they've been having a party, basically, on what was done to restart the economy in 2008, thinking interest rates would stay low forever.

Well they won't.
Not if inflation starts to bite, and so collectively there is this "oh shit" moment which we're in now. The artificiality of this 'improving economy' is being found out. A car can go fine while being seconds from running out of petrol ('gas').

Does that mean we're all doomed and things go to hell on Monday? Not necessarily. Depends which way the herd runs.

So come Monday and if things aren't dire then everyone relaxes, except things ARE still dire, actually, because that means stocks are still being overvalued and if that gets found out during an inflationary explosion... oh dear.

Or things could go to hell on Monday.

Either way debt will continue to assume crushing proportions and eventually endanger the United States.

By the way, in the spirit of those last four words...

Green Eagle said…
I am particularly interested in your bringing up price-earning ratio. When I was young and first got interested in the stock market, a price-earning ratio of 15 was considered at the high level of acceptability. Then, all of a sudden, price-earning ratios of up to a hundred became common. I never saw any of the market cheerleaders really deal with this change, nor did I see them show much concern for something that, a couple of decades earlier, would have been regarded as a road straight to collapse. Maybe it's just taking a long time for us to start paying the piper for the greed that has ruled the corporate world for the last half century.
February 9, 2018 at 10:15 PM

debz said…
Another factor to consider is that many of the big banks are functionally insolvent since they have had access to virtually free cash for the past decade and have not shorn up their holdings. Rather, they have spent the time in stock buybacks, and dividends. That's why even the specter of interest rate hikes are sending investors scrambling.
February 11, 2018 at 6:44 AM

Green Eagle said…
Sorry to take so long to get your comment up, Debz. I usually go to my e-mail on an i-pad as soon as I wake up every day and approve (or not) any comment, but for some reason, my i-pad wouldn't approve your comment, so I had to wait until I was in front of a computer to do it. I think there is a lot of truth in what you are saying; I think a lot of American companies, not just banks, have been systematically plundered by their management since Reagan era deregulation, and are in far worse shape than you would think from the public information available about them.
February 11, 2018 at 3:49 PM