It's getting hard to continue with this, seeing as how we can get things just as lunatic and hateful from the White House these days.  Well, let's just get going with this contribution to our understanding of national affairs:


See, it wasn't Trump threatening to blackmail journalists, it was the other way around!  And how did that work?

"(Jeff Zucker:) It doesn’t worry me that Donald Trump hasn’t done an interview with CNN in eight months. I think our credibility is higher than ever, and our viewership is higher than ever, and our reporting is as strong as ever. One of the things I think this administration hasn’t figured out yet is that there’s only one television network that is seen in Beijing, Moscow, Seoul, Tokyo, Pyongyang, Baghdad, Tehran, and Damascus — and that’s CNN. The perception of Donald Trump in capitals around the world is shaped, in many ways, by CNN. Continuing to have an adversarial relationship with that network is a mistake."


See, it is threatening Trump to say that you are going to go on reporting about him without his permission.  Because unless you are on his good side (i.e. if you only say what he wants you to) you are threatening him.

"There’s not even a semblance of objectivity here, and this is coming from the network’s president."


"Objectivity."  That means only reporting good stuff about him.  George Orwell, you died way too soon.  You missed all of the fun.


Let's just deal with this first:  In case you didn't know (I sure didn't) Patricia Heaton is an actress from a long gone sitcom.  The wingnuts are having to dig a little deep to find anyone to agree with them these days, I guess.  Now as to the substance of this remark:  As far as Green Eagle is concerned, CNN lost all credibility when it spent a year letting Chuck Todd and its whole stable of journalistic miscreants pretend that Donald Trump was in any way an acceptable candidate for President.  Now they are stuck with what they have created, and they are trying to convince us that they are really objective journalists.  Too late, jerks; you lost that on election day, when the candidate that you really supported won the electoral vote.  You could claim he is Satan incarnate at this point, and it wouldn't undo the damage you have done.


Not if you're a Republican.  If you are a Democrat, of course, putting your feet on the desk is still enough to incite a two year freakout. 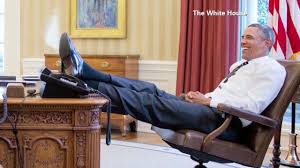 Remember this?  Well, things have changed.

"Trump is indeed something new. He doesn't even pretend to be presidential. Clinton failed at being presidential, but he still  wanted  to be seen as a serious human being; Obama tried to position himself as a serious thinker, even as he did his latest ESPN brackets. Trump has no such pretentions -- or if he does, his volatile id won't allow him to stick to them. He's open and obvious about his disdain for decency and protocol. He spends his days trolling Reddit and 4chan for the latest dank memes to post to his Twitter account, and then he waits with bated breath as his followers cheer themselves hoarse. So, does any of this matter?"

"The result: a race to the bottom. That race seems to be accelerating daily now. Again, that's not Trump's fault."


As long as a Republican is winning the race to the bottom, it's all great.  And by the way, Ben, when you have been the editor of the Harvard Law Review, you are not "positioning yourself" to be a serious thinker, you are one.  Just like the fact that you are a serious asshole.  Deal with it.

Lawrence Myers, Town Hall:  "Why They Hate Trump So Much"


No need to worry about this one.  Anyone who can't figure that out is too far gone to ever be reached by an appeal to facts.

Amelia Hamilton, Red State:  "The Obama Family Now Has An Official Tartan For Some Reason"


This seems to be an occasion demanding some outrage from the right this week.  Oh, well.


The stupidity.  Whereas 20 or 30,000 extra dead people a year is just collateral damage for Streiff, easily justified by the prospect of a brave new world of huge tax cuts for the Koch brothers.

And Streiff is not done with his stupidity today:


It sure does if an incompetent, belligerent bully like Trump is left in charge.  Of course, like most wingnuts, Streiff is all for war, particularly against a country he knows we can kick the crap out of. And as for the millions of South Koreans and Japanese that North Korea might kill before we reduce Pyongyang to a parking lot?  Hey, just take a good look at them- they are barely more worthy of our concern than the people of North Korea are, if you get what I am saying here.


Oh my God!  Illegal immigrants! And art! Two enemies of the new Republican America coming together to, well, to do something terrible.

Caleb Howe, Red State:  "Independence: This Fourth of July, Think About What it Means"

Charlie Martin, PJ Media:  "A Bunch of White Guys Got Together in Philadelphia and Guess What Happened?"


They invented the cheese steak?


Yes, Jim Hoft once again proves why he is the Stupidest Man On The Internet, by publishing four stories in one day about the totally imaginary threat he has dreamed up, in which  CNN did something really horrible to the guy who made the video of Trump beating up the CNN guy.  Once again demonstrating why the Trump administration has recognized Hoft as a trusted news source.

Siena Hoefling, Renew America:  "Protect the Children...When Syrian President Bashar al-Assad reportedly used chemical weapons against his own people, U.S. President Donald Trump answered with punitive missiles. Assad violated previous agreements, said Trump, and the United States had a security interest "to prevent and deter the spread and use of deadly chemical weapons."  But ultimately, Trump said, it was the cruel destruction of children that stirred him to act."


The millions of American children Trump wants to cut off of medical care?  Not so important, I guess.  Trump concluded his remarks by saying:

"as long as America stands for justice, then peace and harmony will in the end prevail."


Get ready for the bloodbath, I guess.


One more reason that WND, one of the most influential wingnut sites in existence, is such a force for the truth in American journalism.

William L. Gensert, American Thinker:  "It is about time those of us on the right took the gloves off and stopped trying to be better than the left."


Fat chance of that ever happening.  William's alternative to being "better than the left?"  Violence.  Of course, William weakly denies that, but his whole article reeks with the love of violence.

"I have self-trained to use an edged weapon, and fought in the 1976 Golden Gloves...I haven’t thrown a punch in anger since long before the beginning of this century. I carried a Beretta 92FC 9 mm or a Walther PPK 380 semi-automatic pistol for longer than a decade in the Bronx...college. I had fistfights on the main drag and the only reason I survived was I won...it is about time those of us on the right took the gloves off...Republicans have always played the game with civility...To not fight, to be gentlemen and to prosecute this battle with decorum and a sense of fairness to the Democrats is a surefire loss...It’s time to get your hands dirty with the blood of our enemies...We on the right are America and we need to stand up and fight to ensure this country remains freedom’s safest place. Donald Trump is with us. I’m in, where do you stand?"


I guess you get the idea.  Why, no, no, NO, William is not calling for violence!  He'd never do that, now, would he?


See, these are "Pizzagate" arrests.  Remember Pizzagate?  That was the right wing smear that Hillary Clinton ran a child sex ring.  So here it comes again- Hillary is apparently responsible for every incident of child sexual abuse in the entire country.

Before It's News:  "Weaponized Cell Towers Are Directly Related to Why Chemtrails Are Sprayed" 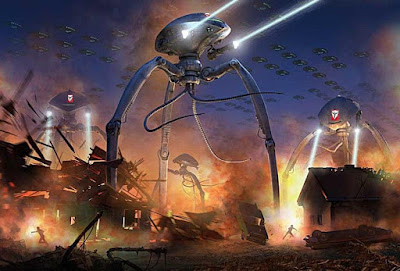 Man, now I am scared.

"If you remember nothing else about all of this technology, remember this: Be afraid. Be very, very, afraid."

Before It's News:  "Did you know that there exists an ancient book that contains a secret that had been hidden for over 4,000 years? "


The Necronomicon?  Anyway, let's just move on to this exciting news:

Before It's News:  "Inner Earth Kingdom Ambassador to Speak Publicly in New York"


Yes, we are about to be addressed by the ambassador from people who live inside the earth.  I hope she brings lunch.

Enough, already.  Idiocy like this is paving this country's road to hell.  It's only one step from this sort of thing to the malicious lies Trump tells every day.


It deserves your gratitude, Victor, because you get paid to tell its lies.  As for the rest of us, not so much.

Marc A. Levin, National Review Online:  "Conservatives Have a Stake in Bail Reform"


Well, they sure do if the government ever decides to start trying the real criminals in our society.


Well, discredited except for the fact that it came from the former head of Russian intelligence at MI5, and was confirmed by two other sources found by our intelligence services.  CNN "fueled" this story by reporting compelling evidence that our President is a pervert- something that is obviously not true because Republicans don't want it to be.


Think that could have anything to do with the Heartland Institute being a creation of the Koch brothers?  Nah, must be some other reason.


The crowds were bussed in because Trump refused to appear unless the right wing Polish government provided the cheering throng.  Jim forgot to mention that.  And while we are looking at Jim's coverage of Trump's little jaunt, let's not pass this up:


Yes, he slams Obama! Over something that Vladimir Putin did! And that Trump's own campaign helped with every way they could!  But Trump blames Obama!  Well, what else do you expect?

Enough for today.  See you later.

"In case you didn't know (I sure didn't) Patricia Heaton is an actress from a long gone sitcom. The wingnuts are having to dig a little deep to find anyone to agree with them these days, I guess. Now as to the substance of this remark: As far as Green Eagle is concerned, CNN lost all credibility when it spent a year letting Chuck Todd and its whole stable of journalistic miscreants pretend that Donald Trump was in any way an acceptable candidate for President." - Green Eagle

1) Chuck Todd has worked for NBC and its sister cable stations since 2007. CNN is guilty of a lot of things, but hiring Chuck Todd is not one of them.

2)The Middle, whose cast includes Patricia Heaton, is not a long-gone sitcom; it has been running since 2009, and is returning for a ninth season this year.

Sorry- I don't watch Chuck Todd and I don't watch sitcoms. Seen too much of both in my life to bother with them any more. And of course if I had thought for a minute I would have remembered that Chuck is the moderator of Meet the Press, but I don't watch that either. I have much more fun ways of giving myself a stomach ache.

giving myself a stomach ache.

Do you have a favorite roller coaster?

No, I usually do it through overeating. If I want the roller coaster experience, I can always go up Glendora Mountain Road with my son in my S2000. Just as many dips and curves, but the view is a lot better.