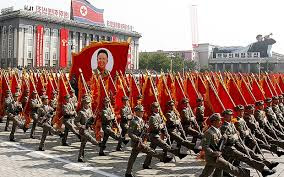 Okay, it is apparently time once again for me to point out the truth about North Korea's belligerent posturing that should be obvious to people with even the most shallow knowledge of the way things work.

North Korea is a military dictatorship, and what's more, a very poor one that devotes an obscene portion of its revenue to its military.  Now, anyone who knows a thing about military dictatorships knows that most of that money ends up in the pockets of the generals, who are the actual rulers of their country, not some bumbling thirty year old nitwit.

Do you think these generals would really leave the security of their racket in the hands of this buffoon? No, it is completely obvious that Kim Jong Un has one role and one role only to play in his country's rule, and that is to keep the populace so frightened of foreign attack that they tolerate being reduced to poverty so the generals can have all the money.  These generals, however, enjoy being able to grow rich from this arrangement, and if there is one thing they know it is that, if they start a real war with the United States, every one of them will be killed, and that will be the end of the good life for them.

The obvious conclusion from all of this is that Kim's bellicose talk is, like most of Donald Trump's bluster, intended for internal consumption only.  He knows perfectly well what would happen if North Korea launches a missile toward the United States, and presumably he would rather live than die.  Other Presidents, and other world leaders, have recognized this fact, so while Kim's belligerence has often required them to reply, they have been careful to pretty much let him rave away, which is really the adult way to handle him.  Not so for our idiot leader Trump, who could actually end up in a vicious war in which millions of South Korean and Japanese citizens are potential victims, all because he is too stupid and hostile to be able to comprehend the nature of even this relatively simple problem.
Posted by Green Eagle at 10:47 AM

Counterpoint: Caligula was a bumbling 24-year-old nitwit when he became First Citizen of Rome, and was pretty much the most powerful figure in the land.

Other counterpoint: Claudius was not a bumbling nitwit, but he acted like one as a form of obfuscation.

And how did Caligula end up?

And while we are on the subject, remember that Caligula was the head of the greatest empire in the history of the world, in an age when mobilizing a war against them would take years. North Korea could be blasted out of existence in days or hours, by a number of potential countries that reached the point of having had enough.

As a Canadian (ie a HUMAN) let me say that is not the question, nor the problem with the N. Korean's. The facts are simple. The US Military SAYS that in the first hour of an attack on the North - the North could hit Seoul with OVER 500,000 artillery/rocket shells. 10+ million live in Seoul and 24+ million live in greater Seoul.

I continue to be disgusted every time some American flippantly dismisses N. Korea MURDERING A MILLION OR SO S. KOREANS (NO QUESTION - N. Korea is even a bigger clusterf*ck than the US - but you Yanks finish a close second for electing S*it for Brains).

IF you must have wet dreams about going to war with them then PLEASE - AT LEAST - show you're not an idiot - and ALWAYS mention the 800 pound gorilla in any discussion about attacking N. Korea.

An aside - you American morons PRETEND you give a shit when the Repugnents want to send 20 to 30+ million of your fellows into a no health care hell hole. BUT YOU A**HOLES never seem to even mention the almost 30 million of your fellow citizens who are not covered by healthcare even with Obamacare.

You are 300+ million of the most selfish, hateful, uncivilized, anti-human morons on earth.

I'm not going to apologize for the rant - but humourously (I spell it in the Queens English) - I came to your blog because you're supposed to be "A Good American Blogger" (via a link from Crooks and Liars). You might be - the bar is very low. Very low indeed. Pity, eh...

I assume you won't have my post published. Personally Green Eagle I would not expect you to be adult enough to. Some hard truths are just too painful - and after all - you're an American too.

We bloggers on the LEFT - what few of us there are - have a responsibility to ensure we don't lie or mislead. Surely, we can leave that type of misrepresenting reality to "them."

Have a good day!

" PLEASE - AT LEAST - show you're not an idiot - and ALWAYS mention the 800 pound gorilla in any discussion about attacking N. Korea."

I did mention that here, as well as other places in my blog. Apparently you aren't concerned enough to learn the facts about people before attacking them.

"An aside - you American morons PRETEND you give a shit when the Repugnents want to send 20 to 30+ million of your fellows into a no health care hell hole. BUT YOU A**HOLES never seem to even mention the almost 30 million of your fellow citizens who are not covered by healthcare even with Obamacare."

I have spoken out in favor of a single payer plan over and over again; the large majority of Americans agree with me. Once again, you don't care to learn the truth before attacking me. And you sure know a lot about what I really believe and what I only "pretend" to believe.

Why not? we all need a good laugh these days. P.S.- you call yourself a blogger. When I click on your name I only come up with a blog that has not had a post since 2007. I've had close to 5,000 since then. Maybe you should have read a few of them before shooting your mouth off about me.

I guess the Queen's English doesn't have any rule's governing the use's of apostrophe's. I thought Canadians were supposed to be smarter and better educated than the poor, drooling slobs who live in the US.

Well, it makes no difference, because as global warming devastates out farmland and makes theirs more viable,and as their army is laughably unable to stand against our mighty military behemoth, it is absolutely inevitable that some Republican administration in the near future is going to conquer Canada and make it part of the good old U.S. of A. The only question about this is whether our leader at that time is a Pence or a Ryan, who will keep all of Canada for himself, or a Trump, who will split it with Vladimir Putin.