Scum of the Century Nominee 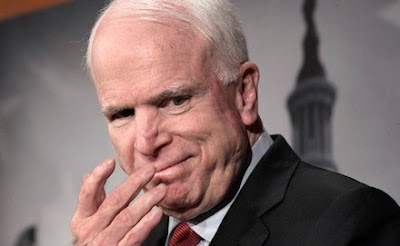 Plenty of money that he got through dumping his first wife and marrying a rich beer heiress, so he can pay anything for his own medical care, but he does not give a God damn about the health of anyone else.

The "maverick" has spent a decade now talking a good game and then voting along with the most corrupt people in the country on every issue, so we have no reason to believe that he would not get up off his sickbed for nothing but to stick a dagger in the backs of tens of millions of his fellow Americans.  And here he is again, betraying the American people, even though at this point in his life it cannot mean a damned thing to him.

He is today's poster child for the utter evil that is all that the Republican party is about.  There is not a shred of decency or humanity in a single one of them, and they are now well on an almost irreversible path to destroying the United States.  And behind all their bullshit patriotic talk, they know this perfectly well, but they just don't give a damn.

We hear plenty of (perfectly justified) talk these days about how Donald Trump does not care a bit about anyone but himself.  We need to remember that every other Republican is exactly the same. They may not be so stupid that they can't keep their mouths shut about it, but they are all the same corrupt, criminal, satanic people that Trump is.

And too bad the gutless Democratic party, with very few exceptions, has spent the time, at least since Reagan, cowering in the corner and refusing to say out loud what is going on in this country.

I now believe that it is overwhelmingly likely that the United States is going to cease to exist, within the lifetimes of many people alive today, devolving into two successful industrial democracies, one on the West Coast, and one in the Northeast, separated by a vast swathe of territory, sparsely inhabited after vicious sectarian wars, and governed by a whole host of Taliban-like warlords or Christian ISIS-style Caliphates .  The only sad thing about this is that the two surviving modern states are going to have to spend vast sums to maintain armies to repel the endless attacks by the crazed people in the center of the country; something which they will easily be able to do, given the incompetence at governing demonstrated by American right wingers, but only at the cost of a good part of the wealth that could otherwise be dedicated to building better societies.

Anyway, John McCain, my only wish to you is that your wealth keeps you from dying until you have had a chance to spend a couple of years in screaming agony, as some sort of just recompense for the tens of thousands of people that you are sentencing to die of cancer while you have nothing but the finest care.
butcher McCain scum

Poll P. said…
You are right. I've never respected this selfish bastard, ever since I read about him abandoning his first wife after she was disfigured in a horrible accident. Instead, he married a blonde heiress with political connections. He's as selfish as they come. Hell is too good for him.
July 25, 2017 at 1:41 PM

Magpie said…
The chance to undo the signature achievement of the man who beat him in 2008...

If the post-USA scenario you describe comes to pass then California, and Hawaii for that matter, can join the Pan-Pacific superstate I think is coming over a longer time frame.
July 26, 2017 at 4:28 AM

Anonymous said…
"The "maverick" has spent a decade now talking a good game and then voting along with the most corrupt people in the country on every issue,...."

A decade? Try 16 years. When the confederate (not worthy of capitalization) flag issue came up during the 2000 South Carolina primary, he flinched and called it a states' rights issue. And during testimony in support of his namesake campaign finance bill, he was asked if he could point to a single case of campaign contribution causing corruption. Too chickenhearted to offend anybody in elected office he said NO.

McCain has ridden his legitimate Vietnam story every bit as shamelessly as Giuliani (our next attorney general?) has 9/11.
July 26, 2017 at 5:25 AM

Anonymous said…
I do believe we are at a crossroad, that in he next few years, may result in events occurring in this country we never thought could happen.

All in the name of greed.

McCain is just another white male prostitute selling his soul for the party.
July 26, 2017 at 6:52 AM

Flying Junior said…
I guess not one of the six of you called this correctly. So next time, take a deep breath and don't commit too early.

If we can't work with guys like McCain, maybe all of you pessimists are absolutely correct. Most of us are still working to try and save this. The guy graduated Annapolis, in what was it, 1958 or something like that? He had a chance to go home from his bamboo prison cell but refused to go so long as his men were imprisoned. If nothing else, he is a damn fine American. He is not to blame for what has happened to the republican party of late. Remember McCain-Feingold? Of course he was one of the guys who still had a conscience. Maybe they all are heartless bastards who don't care if their fellow Americans live or die. But I feel that McCain has differentiated himself.

And I guess he just saved the day for most of the U.S.A. I say the day because unless this menace is stopped dead in its tracks, the vile republican machine will not rest until it unleashes complete chaos.
July 30, 2017 at 10:50 PM

Green Eagle said…
Flying Junior, I think you are wrong about McCain. He has a record going back decades now of talking a good game but then going along with all of the other Republican pigs when it's time to vote. Here is what I believe happened here: He voted as usual with his Republican partners to allow the thing to go farther, but then was stunned by the backlash from every corner that he got for that piggish act, at the very moment in his life when he should have been most sensitive to what it means to have no medical care. He was shaken up enough that he caved and voted against the bill, but don't think it represents some change in him. He is the same dishonest, corrupt person he always was.
July 30, 2017 at 11:00 PM