The Art of the Cave

So in the end, the real interest of the world was not, surprisingly enough, on whether John Podesta refused to give some e-mails to the government which were not in his possession*, but exactly how Donald Trump, as President, would stand up to the man who all of our intelligence agencies say was responsible for massively interfering with the integrity of our election process, putting a corrupt, stupid tool (that would be Trump himself) in the White House instead of the massively experienced, honest, serious public servant who should be there.

I guess we should have gotten a sign of how that was going to go, the day before the much-heralded meeting between Trump and Putin, when Trump pretty much preempted taking a strong stand about this near act of war, by declaring against the determination of all of the American experts, that there was no reason to believe Russia was behind the treachery in his favor in the recent election. 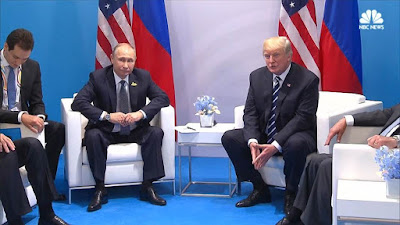 I saw a little of this (very little, thank heaven) as it happened, and let me tell you what I observed, which is not entirely obvious from this still image.  Trump is sitting there like a little child in Church, with his hands between his legs, and sort of hunched over, radiating the fact that he is a passive observer at an event where he is forced to be present and doesn't really understand.  Putin, on the other hand, looked both bored and vaguely annoyed by having to participate in this meaningless dog and pony show, when he knew damned well that he had already made sure that he got his way.

And get his way he did.  Our observer at this event, Rex Tillerson, had nothing of substance to say about the issue of Russian interference in our election, while the Russian observer promptly went in front of the cameras, and announced that it had been decided to leave the entire issue of Russia's attack and Trump's treason in the past, and move on, presumably to lucrative deals for rich guys in both countries, which could now take place in the near future.

There are two readings that one could take away from this meeting.  First, that the man who proclaims himself to be the World's Greatest Negotiator is, in fact, virtually the worst negotiator ever, who just gave away every single bargaining chip he had against this powerful adversary, for nothing in return.

Fair enough; you don't start out in life as a rich guy and then go bankrupt six times without being a pretty worthless businessman.  But there is another far more malignant interpretation of this meeting. It is equally possible, perhaps even far more likely, that Trump was bargaining for no one but himself. In this scenario, Trump sold out (one more time) the entire country that trusted him with its leadership, to cover up for a little while longer the dirty dealing that put him in charge; that avoiding a personal humiliation is more important to him than the security of the entire country.

Well, I'll leave you to decide that one on your own, but I cannot leave this subject without saying something about the results of Trump's behavior.  Look at this picture from the G20 summit: 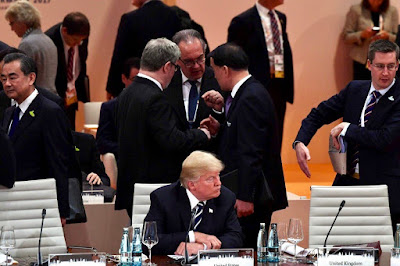 This was taken immediately after one of the summit sessions, and shows the leaders of the rest of the world discussing issues among themselves, with absolutely no interest in any input from Trump.  Yes, in six months, Trump has destroyed our country's century long role as the leader of the free world, and given us an irrational, irrelevant government that must be excluded as far as possible from any meaningful role in guiding the future of the world.

And still, 95% of Trump's followers think he is the greatest President ever, and the rest of his party, who may not be as stupid as him, but are just as corrupt, show no interest in dealing with the catastrophe they have generated, until he succeeds in helping them strip our country of all of its value. I know I've said this before, but we are fucked.

“Everyone here is talking about why John Podesta refused to give the DNC server to the FBI and the CIA. Disgraceful!”


Yes, the attention of the whole world was absorbed with why Podesta, who just to be clear, was not on the DNC, didn't turn a few e-mails over to the Republican witch hunt.  That's what they are all concerned with, while they are disinterested in a potential nuclear war with North Korea, the sabotage of world-wide climate action, or the takeover of the world's leading military power by a traitor.
Posted by Green Eagle at 4:25 PM

Labels: Putin, The art of the cave, treason, Trump

This may be the best post I've read by you.

I love that Putin looks ready to leap out of his chair and strangle someone...anyone.

Thanks very much for the encouragement, One Fly. I liked this post when I wrote it, and I'm glad someone else liked it too.