Has There Just Been a Coup? 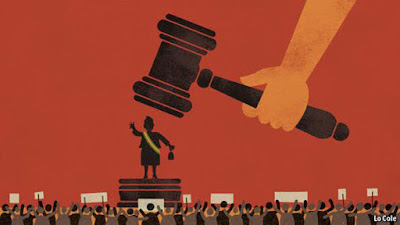 A general takes over as chief of staff and immediately reacts by firing a guy who we know is Trump's alter ego, without a word of complaint from Trump.

In the last couple of days we have seen Trump order the military around without authority in the LGBT matter, come within inches of starting a war with North Korea. drastically damage our standing in the world, risking further conflicts in which the military would pay the price, and license the police to effectively start a war of terror against our own people.

Maybe that was a little bit too far for the military.  Did Trump really appoint Kelly to his new post, or was it forced on a man who has now been revealed as a weak, sniveling President who knows nothing except how to make threats?

Probably not, and if it is true, we may never see behind the curtain, with a suddenly controlled Trump still sitting in the Oval Office, pretending to make decisions, but with everything signed off on by the military, which would just wait things out until 2020, when a more rational seeming tyrant could be elected.

Anyway, there's a good Tom Clancy book in there somewhere.  Too bad it's reached the point in our country that it could be more than a book.
Posted by Green Eagle at 1:45 PM

A very interesting thought. A coup does not have to include tanks rolling down Pennsylvania Avenue. It would be more effective to simply take control of the White House. Trump is such a pussy! Just give him some money, and he will roll over. Pee on him, and you've got him for life.

I think Scaramucci had no intentions of staying around. We know he wasn't going to accept any money for the role. Melissa McEwan postulates that Scaramucci's real job was to drive away Priebus (former RNC chair) and Spicer (former RNC chief strategist), and he wasn't needed after they left.

I don't know what Scaramucci gets out of the deal, but I'd follow the money trail - perhaps a regulatory change to give him millions.

I'm with you. Army coup, maybe with Intelligence services cooperation, and a lot of help from the Inside. When we see the next few days' tweets, we'll know if they've grappled him to the floor. The simplest way to control him would be to cut off his access to hair and makeup people.

"Anyway, there's a good Tom Clancy book in there somewhere. Too bad it's reached the point in our country that it could be more than a book."

Also too bad that Tom Clancy 1) was a conservative and 2) is dead, although the "Jack Ryan" universe is still going under other authors. It's like Twinkies, too profitable a franchise to allow to die with its creator. That written, now I'm imagining "Seven Days in May" where the coup succeeds.

Yeah, my son is a big fan of that sort of book, so I knew that Tom Clancy is dead. I guess I used his name because it is an instantly recognized signifier of the type of book I am talking about. Sort of like saying "An Agatha Christie book" or "A Sherlock Holmes story." Sorry I was unclear about that.

And like so many of the writers of that sort of book, Tom Clancy was certainly a pretty hard core right winger. It would take a left wing equivalent to handle this subject, because someone like Clancy could never face the reality that would be revealed in a book that showed what the real threat to our country actually is. I've also been thinking about a modern version of "It Can't Happen Here," written about the U.S. a couple of decades from now. I wish I had the ability to write something like that. If I did, I'd give it a try.