I won't bother to demolish Donald Trump's insane account of both Napoleon's and Hitler's invasion of Russia, from yesterday's interview; there are plenty of people handling that.  I will, as an architect, comment on his account of Napoleon's work in the city of Paris:

"What he did was incredible. He designed Paris.” [garbled] The street grid, the way they work, you know, the spokes."


Donald, that was done by Baron Haussmann, who was commissioned by Napoleon III, who was the nephew of the Napoleon you are talking about. 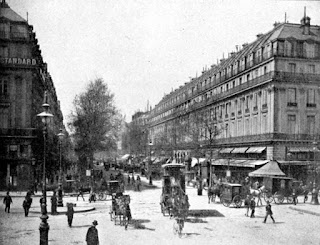 One of Haussmann's boulevards in Paris

Why don't you keep your damned mouth shut about things that you know nothing about?  Of course, that would pretty well stop you from talking about anything, wouldn't it?  Hey, not a bad idea, really.
Posted by Green Eagle at 4:00 PM

As an architect, do you have a favorite building or a candidate for ugliest one?

The building that impressed me the most when I was in it was the Villa Barbaro at Maser, by Palladio. Can't explain it in pictures, but the experience of being in numerous Palladio buildings makes me understand why he is considered the greatest architect ever.

Sad to say, the competition for ugliest building is much more crowded with entries. I won't name a single building, but will just mention the godawful mess that American architects have made of so much of our urban fabric all over the country. It's no wonder that architecture does not enjoy the same respect here that it does in Europe.