At Least They Will Destroy Themselves More

I guess it is worthwhile to keep our eyes on what is going to happen to our country when the effects of the corrupt Republican refusal to acknowledge the damage caused by climate change really takes place.  Here's a county by county map of the degradation to gdp that will happen by 2080 or so: 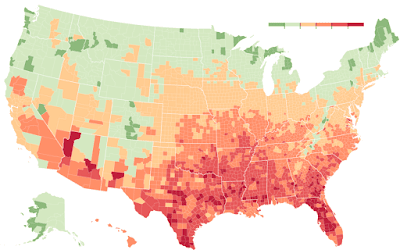 I'm not sure there is much satisfaction to be taken by this fact, but the damage is going to be overwhelmingly concentrated, as you can see, in the red States that support Republicans.

Unfortunately, as informed people already know, the Republican States only exist by sucking the earnings out of the blue States.  So, in fifty years or so, the belligerent, stupid, greedy right wingers that fill these States will have even more motive to engage in violence to take away what the rest of us have earned.

Just one more reason why I believe that this century is going to see the end of the United States as a single entity, brought down not by terrorists or illegal immigrants, but by people screaming about patriotism at the top of their voices.  It's only a couple of decades from now when we reach a point where the hate and greed of right wingers will doom this country to a bloody extinction, after which, God willing, the people left in the sane areas have the sense to blow these subhuman monsters to kingdom come.

Here's a sample from the article:

"In a new study in the journal Science, researchers analyzed the economic harm that climate change could inflict on the United States in the coming century. They found that the impacts could prove highly unequal: states in the Northeast and West would fare relatively well, while parts of the Midwest and Southeast would be especially hard hit."


You can read the rest here.
Posted by Green Eagle at 4:01 PM