And let's just start out with the most incoherent attack on Obama I've seen lately:

John Ransom, Town Hall:  "While ISIS conducts a pogrom in the Middle East on groups like Jews and Christians with whom it disagrees, the Obama administration has transferred their domestic political pogrom on jobs to the black hooded terrorist army."


Huh?  I guess he is trying to say that Obama is somehow like ISIS, because he is conducting a "pogrom" on jobs.  The statistics on this vicious pogrom can be seen in this chart: 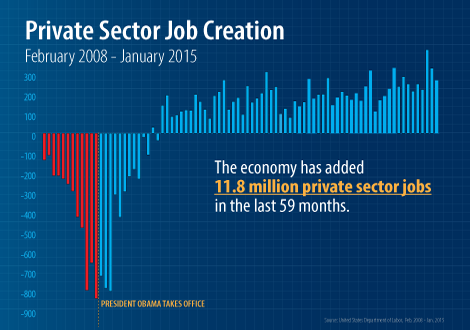 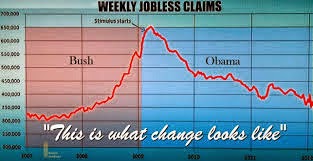 Mr. Ransom somehow forgot to mention that Obama's pogrom on jobs has actually generated over 11 million jobs.  Just an accident, I guess.


No real scandal?  Then let's make up a fake one:  The Clinton Foundation is a charity.  None of the money goes to the Clintons themselves, or to Hillary's campaign.


What precipitated this rant?  Well, some lady with a concealed permit from Pennsylvania got arrested in New Jersey for carrying a concealed weapon.  So Republicans are trying to pass a bill forcing all States to recognize other States' concealed carry permit.  Democrats are against this.  How fast the entire 150 year history of States' rights goes out the window as soon as Republicans want to pander to gun manufacturers (or anyone else with a whole lot of money, really.)

Erick Erickson, Red State:  "The Line Between Islamic Extremists and Gay Rights Extremists...We have another life targeted for destruction by the gay rights community. Barronelle Stutzman, an evangelical Christian, declined to provide flowers for the homosexual wedding of a long time customer of hers. The customer was gay and, again, a long time customer. Barronelle Stutzman is now going to lose her business, her life savings, and possibly her own home for putting her faith into practice. Both her customer and the State of Oregon are taking everything she has for not bowing at the altar of sexual sin."


Because buying flowers is exactly the same as cutting people's heads off and burning them to death.

And now, how about a relatively long  journey into the world of right wing malice?

I am so NOT into conspiracy theories.  For me, it was always  Oswald with the Mannlicher-Carcano in the Texas School Book Depository.  The only conspiracy I ever believed in was the Black Sox Scandal.  And yet… and yet….


No, I still don’t believe it. It’s simply not true.  Barack Obama is not the Manchurian candidate. That’s just an excuse. The only problem is…


"He’s worse.  He’s far worse.  Barack Obama doesn’t have to be a Manchurian candidate.  He can and is doing more damage without being one.  A Manchurian candidate could be exposed (yes, and possibly could not).  Barack Obama doesn’t need that.  He and the media and the brainwashed public that elected him are destroying our country (and the West) all by themselves.   We have the next thing to a jihadist in the White House."


It's getting near the end of Obama's Presidency and they still haven't found anything to impeach him for, so it is inevitable that they are going to get more and more shrill as their window of opportunity slams shut on their fingers.


Michael, the problem isn't shooting.  It's when you start shooting at people.  And when that gets fun, you know you are a Conservative.


Thanks, Obama.  Everything is your fault.  Of course, ISIS would not exist if Bush had not invaded Iraq, but that was a long time ago, so let's just forget about it, huh?

Paul Bond, Hollywood Reporter:  "Former 'SNL' Actress Victoria Jackson on Political Bias at Anniversary Show: "Is Lorne Ashamed of Me?"...she was the only castmember at Sunday's event to be banished to an overflow room."


I'll tell you what: If Lorne Michaels isn't ashamed of this disgusting right wing racist hater, he's crazy too.  He should be grossly apologetic about having given her a national platform.  Watch as much as you can stand, to see why:


You know who is really strengthening ISIS?  Allen West and everyone like him who spend their days proving to the members of ISIS that people in the west hate them and want to destroy their religion, thereby showing that their propaganda is based on facts, not lies.

World Net Daily:  "Hideous creature is for real, and it bites! "

And what's more, it gets drunk and shoots people in the face. 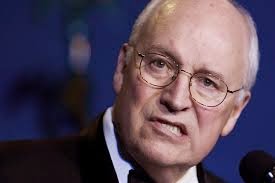 
By giving it to millions of people.  Mr. Goodman cites a few undoubtedly phony anecdotes (they always are phony) and ignores the 11 million newly insured, and 30 million helped by provisions in the Obamacare law.  Even his anecdotes, of people who supposedly had trouble getting treatment, don't seem to have much connection to Obamacare, but then none of their attacks ever do, because, surprise, wingnuts- it's working.

Michael Loftus, Town Hall:  "How Not to get Killed by the Cops:  "Don’t do anything that would make a policeman want to kill you.”


As opposed, say, to the oil business.


And what is this horrible bullying?  It involves penalizing businesses that refuse to pay their workers the minimum wage.  Bullying!  Despite the law, and basic human decency, these businesses should be able to do whatever they damned please, and if the government does anything about it, it's bullying.  Conservatism in a nutshell.


And now, no trouble getting tickets for this one, I bet:


Can boredom actually kill?  We are about to find out.


No thanks.  But maybe this video will be up for an award at the Conservative Hollywood Awards Show.


They hate science- yet another way that Saudi Clerics are just like our own right wingers.


Helpfully illustrated with a picture of Obama, and carefully selected to include the time the Bush administration crushed the economy almost to death, tacked onto the 68 months of job growth under Obama.

And now, just a little more fake history of the Nazis, courtesy of their brothers on the American right:

David P. Goldman, PJ Media:  "If Only Germany Had Solved Its Unemployment Problem in 1933, Germans Wouldn’t Have Become Nazis"


Sorry, you ignorant fool, Hitler took over the government in January of 1933, so even if every single person in Germany got a job in 1933, they still would have had the Nazis.  Try learning a little something before shooting your mouth off.  Too much to ask?  Well, I figured as much.


And here's a screen capture from the video: 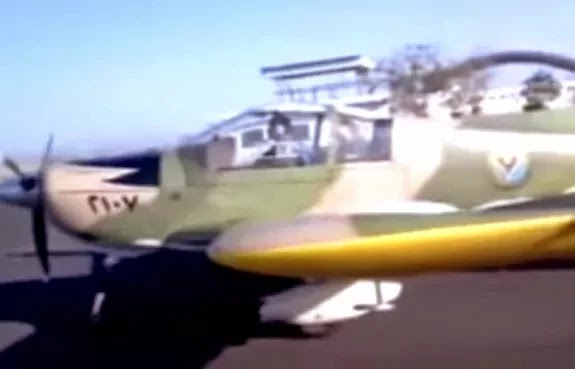 Jim, I don't know how to break this to you gently, but planes that have propellers are not jets.  That is actually a well known fact. Not that facts mean anything to Jim Hoft, as he has proven about thirty five thousand times.  Once again, Jim proves why he retains his title as "the dumbest man on the internet" despite mighty challenges every day.


"Leaks" being shorthand for "releases any information we don't want to hear."  This article claims that Sovereign Citizens are actually liberals, despite the fact, documented here at Green Eagle over and over again, that they are a product of hard right white supremacists.


Hey, Sher, last year it was the Communists.  Make up your mind already.


And here it is, at least part of it:

"All judges who have been nominated by the President and duly confirmed by the Senate to sit on any inferior Court established by Congress shall be liable for re-affirmation every second year by a vote of the people comprising their particular district over which their Court is convened. Should any judge be removed from office by such a vote of the people of their district, the vacant seat will be filled following the process already delineated in this Constitution.


"Any judge who is removed from office by a vote of the people shall henceforth be ineligible to hold any other position on any Court in the federal judiciary at any level..."


Tim, you are way too wordy here.  Let me reword your amendment for you:

"No judge shall serve on any Federal court unless he can get enough money from the Koch brothers to win an election.  And if the Koch brothers use their money to campaign against him, he shall be forever ruled unqualified to be a Federal judge."


There. That's much clearer, right?


Reverend, I'd love to have you document that one.  Somehow, I think you are stretching the truth there a little.  Unless social workers are riding along on those drones that are bombing them.

Pam Key, Breitbart:  "Sunday on Fox News Channel’s “Media Buzz,” while discussing the controversy over President Barack Obama and his administrations unwillingness to label ISIS and other extremist groups as Islamic terrorists,  investigate reporter Sharyl Attkisson pointed out the media and society at large has no problem being very clear it’s Christians who bomb abortion clinics."


With the media's only justification for this abominable behavior being that it happens to be true. How unfair.  Brought to you by "investigative" reporter Sharyl Atkisson, primarily known for spreading lies about Benghazi, for which she lost her job, and recently seen accusing the White House of attacking her computer keyboard, in a ludicrous conspiracy claim hardly distinguishable from those of people who think the CIA is communicating with them through their teeth.  Keep it real there, Breitbart guys.


As the Times points out:

"Though often described on conservative news programs as a “Harvard astrophysicist,” Dr. Soon is not an astrophysicist and has never been employed by Harvard. He is a part-time employee of the Smithsonian Institution with a doctoral degree in aerospace engineering. He has received little federal research money over the past decade and is thus responsible for bringing in his own funds, including his salary."


As if we didn't know that the 3% of "scientists" who dispute global warming (with the exception of a couple of cranks and cheap attention seekers) are all being paid by corporate interests to tell their lies.


You know what, Maggie?  No one used to hate Christianity before people like you managed to turn it into something hateful.  You are damned right that people like me can't stand the "religion" full of violence, racism and hatred which you have substituted for what used to be called "Christianity." And we are going to go on opposing it, because it is a malignant force in our lives.

Ron Edwards, News with Views:  "THE GREATEST DANGER AMERICA FACES  What is the greatest danger America faces? The list of dangers faced by our beleaguered republic is long and varied. Amongst the most obvious are the over twenty terrorist training camps strategically ensconced throughout America."


Funny that Ron couldn't come up with one shred of evidence for this supposed fact.  Of course, by the way, he utterly ignores the literally hundreds of real terrrorist training camps being run in the country by right wing militias.  No, it's the imaginary Muslims we need to be in a panic about.


Do you really want to hear any more about this?  No, I didn't think so.

Lee Duignon, News with Views:  "Frankly, I’m not much interested in the “science” of Global Warming"


Of course not.  People like you are not interested in the science of anything.  You are only interested in what you get paid to say.  See my item about Willie Soon, above.

Coach Dave Daubenmire, News with Views:  "FIELDING A TEAM TO DEFEAT THE POWERS OF DARKNESS...I am putting together a team...and I need your help."


Preferrably help of a financial nature.  Brought to you by another fiercely independent, self-reliant Conservative.

Pastor Roger Anghis,  News with Views:  "Watching the Transformation of America...Pastors no longer confront the social issues of the day that are destroying our society"


That's because the pastors you are talking about are the social issue of the day that is destroying our society.

And as usual, enough is enough.  See you soon.