Here's a report on the annual survey of world elections by Harvard University and the University of Sydney, which pretty much reports what anyone could have predicted.  I should mention at the outset that this article is from Brad Friedman, who has chronicled the degeneration of the American electoral system for as long as I can remember, and who is, accordingly, totally marginalized by the mainstream press:

"U.S. 'Electoral Integrity' Ranked 45th Among 107 Nations, 'Worst of Established Democracies'...[C]ontests in the United States scored the worst performance among any long-established democracy. Hence the 2012 Presidential elections was ranked 42nd worldwide, while the 2014 mid-term Congressional races was ranked 45th, similar to Colombia and Bulgaria. One reason is that experts expressed growing concern over US electoral laws and processes of voter registration, both areas of heated partisan debate."


Columbia or Bulgaria.  I don't think I am being unfair to state that this outcome is pretty much the equivalent of having no democracy at all.  And this survey does not seem to take into effect the coming tsunami of money being poured into the electoral system where, as you know, one source alone- the Koch brothers- is slated to spend as much as either one of the two political parties in the next Presidential election. 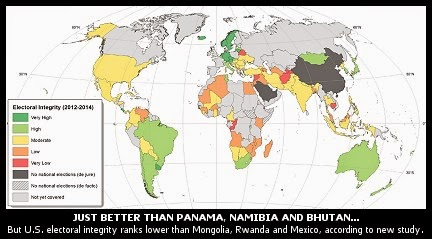 I want to make it clear that this is not some sort of horrid accident.  It is the result of a conscious, decades-long campaign by one of the two American political parties to destroy any input from the American people concerning who rules them.  It is now possible to run successful campaigns in this country with the financing of one or two rich people,totally eliminate the participation of 99.999% of the rest of us, except in a political dog and pony show designed to ape the appearance of fair elections.

And let me be clear about what caused this low ranking:

according to the new report, the project's "concept of 'electoral integrity' refers to international standards and global norms governing the appropriate conduct of elections."


...The November 2014 Congressional elections got poor grades because experts were concerned about the electoral laws, voter registration, the process of drawing district boundaries, as well as regulation of campaign finance."
The study cites U.S. voter registration, "in particular", as a concern. It cites new laws regarding access to the polls as "increasingly polarized and litigious...ever since the 2000 'Florida' debacle, generating growing controversy in state-houses and the courts."
"America also suffers from exceptionally partisan and decentralized arrangements for electoral administration," according to the study, which finds that recent Supreme Court decisions "suggest that the role of money in American politics deserves more detailed scrutiny."


In other words, the concerns of this study were regarding Republican voter suppression efforts.  The issue of the Citizens' United decision has not even really been factored into the mix.  If it had, the US ranking would have been even lower, clearly falling where it now belongs, in the category of no democracy at all, or to be more blunt, a fascist oligarchy.

But this is AMERICA, The Greatest Country In The History Of The World, and if you claim there is one single thing wrong with AMERICA, we will scream you down with a tide of abuse which will shut you up forever.

No public education, no health care, no environmental protections of any kind, no provision for what happens to you when you are too old or sick to make money for your boss, and wages low enough to barely keep you from starvation: this is all just around the corner in this country.  And virtually no one on either side seems to care.  So much for family values; most Americans care more for their hatred and their greed than they do for their children.  And they are going to get just what their piggish, disgusting attitudes have earned them.  It's just too bad that those of us who care for what this country used to be are going to get it too.
Posted by Green Eagle at 6:23 PM

The FOX News site has a piece titled "Why I wish the Koch brothers spent even more money on politics".

this is a quote:

"The unions, unlike the Kochs, promote economic ignorance. They push rigid hiring rules, limits on firing lazy workers, “buy American” campaigns, taxes on imports and other ideas that stifle growth."

So there you have it. Buying American-made goods to support American enterprises is bad for America. Bet you didn't know that.

The America right-wingers talk about isn't a real place, is not the US which elected PBO overwhelmingly (twice) and didn't even exist when created" by the DWEMs.

It's an imaginary place where trickle down economics works, conservatives like Bullshit O'Lielly, Racist Limbaugh and Sean Insannity are heroic defenders of America, and the Nation is a meritocracy where race, gender, sexual orientation aren't held against you and the being born poor is an inherent flaw of your work ethic.

Is that the American Exceptionalism the conservatives are always bragging up?