Best to not just forget about what is happening there.  From the Washington Post, the following: 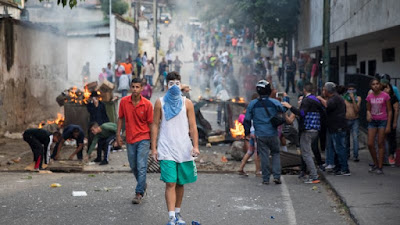 Our nation's gift to the people of Venezuela

"The least noticed but most striking failure of maximum pressure has come in Venezuela, a country just three hours by air from Miami that for decades was deeply dependent on the United States for oil revenue. Trump cut off that income stream, confident it would cause the collapse of a socialist dictatorship already in economic and political free fall.


Instead, a year later, the regime of Nicolás Maduro appears to have stabilized. The lights are back on in Caracas, once-empty stores are full of goods, and the U.S.-backed opposition has been ousted — at least physically — from the National Assembly. Trump’s demand — that Maduro leave office and make way for fresh elections — won’t be realized anytime soon."


"Trump cut off that income stream..."  Let us be clear about this: the United States sabotaged the economy of Venezuela, and then blamed the ensuing suffering on the Venezuelan government, and on "socialism" in general.

Why Venezuela?  Venezuela is a massive producer of oil, and its governments have had the nerve to insist that the profits from their oil benefit their own people, and not just the sociopathic billionaires who control the world's oil business.  That can just not be allowed, any more that the nation of Iran can be allowed to benefit from its oil resources, so an excuse was found to attempt to destroy their economy too.

Best not to be so distracted by the Trump sideshow that we forget what is really going on in the world.

Unknown said…
Marriage restoration..Stop your marriage from breaking apart today. I lost my husband to another woman 2 weeks ago after 27 years of marriage . We had a lovely marriage but he started a relationship with a co worker who chased after him . He is living away near his work and her and refuses to talk to me or to come home . I am devastated and am finding it hard to cope . I wish I did not love him and that I could move on but I can't . I don't know how to stop feeling like this I wish I didn't as its eating me away and I m starting to feel ill. I have degraded myself begging him to come home all to no avail. I became very worried and needed help. As I was browsing through the internet one day, I came across a website that suggested that Chief Dr Lucky can help solve marital problems, restore broken relationships and so on. So, I felt I should give him a try. I contacted him and he did a spell for me. two days later, my husband came to me and apologized for the wrongs he did and promise never to do it again. Ever since then, everything has returned back to normal. I and my family are living together happily again.. All thanks to Chief Dr Lucky. If you need a spell caster that can cast a spell that truly works, I suggest you contact him. He will not disappoint you. if you have any problem contact him, I give you 100% guarantee that he will help you, This is his details,Email him at: Chiefdrlucky@gmail.com you can also call him or add him on Whats-app: +2348132777335
May 3, 2020 at 12:21 AM