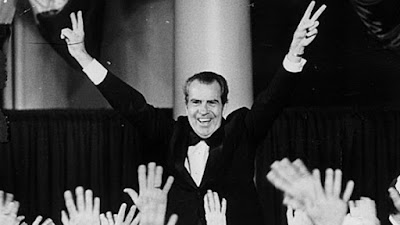 I've said this before, but I think it needs to be repeated at this point.  The Republican party learned the only lesson they were ever going to learn from Nixon, but they definitely learned that one.  It only took a handful of Republicans in Congress who were halfway honest to drive Nixon from the White House, and the Republicans sure made sure that that never happened again.

As the years went by, and we saw one Republican after another destroyed by horrible skeletons in their closets, my wife used to say that they didn't let anyone run as a Republican unless they were corrupt or criminal enough that they could be destroyed at any time, if they bucked the party.  What at one point seemed like a joke has come to appear more and more like reality as time has gone by.  And here we are- A President of massive criminality, whose treason is clear for all to see, and yet still it is unlikely in the extreme that the Republican party will do a thing about it.

Oh yeah, I expect that, by prearrangement, the Republicans will have one or two of their Senators vote for impeachment, just so the Democrats can't say that it was a party line vote, but the fix is in.  When you start looking for when the Republican party started its descent into open criminality, you have to look farther back than Trump, or Bush or Reagan.  It started in earnest way back there in the sixties, and it has taken them a half century to build a base that is vicious and brain dead enough, and a leadership that is criminal enough to deliberately destroy this country.

Anonymous said…
I disagree as to the lesson the thuglicans learned from the hixon disaster.
What they learned was that if they had only "owned" the meia his crimes would not be covered and a "news" organization would act as a spin doctor for any thuglican misdeed.
One of the board members of the Bishop estate made just that point after being removed by the courts and while facing indictment when he claimed that if the Bishop estate had only bought the local paper that broke that scandal open everything would have been fine.
So with addled ronnie removing the "fairness doctrine" from FCC licenseing while steadily raising the amount of media that one organization could own and control while changing law so foriegn owners such as moon and murdock could buy the media to make it the mouthpiece of the to whack job right.
Control the information, Distort reality and lie in big bold headlines that is what the thuglicans learne.
February 9, 2020 at 12:01 PM

Unknown said…
Marriage restoration..Stop your marriage from breaking apart today. I lost my husband to another woman 2 weeks ago after 27 years of marriage . We had a lovely marriage but he started a relationship with a co worker who chased after him . He is living away near his work and her and refuses to talk to me or to come home . I am devastated and am finding it hard to cope . I wish I did not love him and that I could move on but I can't . I don't know how to stop feeling like this I wish I didn't as its eating me away and I m starting to feel ill. I have degraded myself begging him to come home all to no avail. I became very worried and needed help. As I was browsing through the internet one day, I came across a website that suggested that Chief Dr Lucky can help solve marital problems, restore broken relationships and so on. So, I felt I should give him a try. I contacted him and he did a spell for me. two days later, my husband came to me and apologized for the wrongs he did and promise never to do it again. Ever since then, everything has returned back to normal. I and my family are living together happily again.. All thanks to Chief Dr Lucky. If you need a spell caster that can cast a spell that truly works, I suggest you contact him. He will not disappoint you. if you have any problem contact him, I give you 100% guarantee that he will help you, This is his details,Email him at: Chiefdrlucky@gmail.com you can also call him or add him on Whats-app: +2348132777335
May 3, 2020 at 12:20 AM