Today's Wingnut Wrapup is respectfully dedicated to Jim Hoft, the famous Stupidest Man On The Internet, for the following post, which has since been deleted without comment (the image capture from Little Green Footballs.) 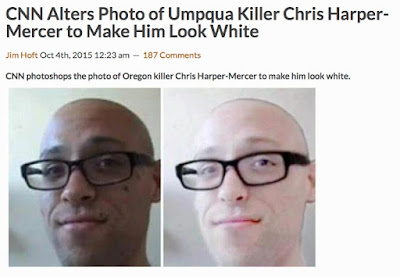 Is it even necessary to say that CNN never did any such thing?  Jim seemingly found this picture on some sort of neo-Nazi website, and just took it for granted that it was real.  He took it down, but not before numerous other wingnuts picked it up and sent it out into the ether, where it will remain to snag the gullible forever.

Now, to demonstrate how afraid wingnuts and their rich paymasters are of the tide turning on guns in our society, I'd like to show how many opinion pieces one website, Town Hall featured, in one day recently.  And don't forget, this isn't just about gun control.  Once people win a battle with gun companies, they might just get a taste for regulation, and then all bets are off.  And recent victories on gay rights and marijuana have shown them just how fast these changes can come.


Dear Doug Giles:  More Americans have been killed by guns since 1968 than in all of the wars this country has ever fought.  That's because of your stupid and vicious policy.  The number would be 1,516,863, as of August.  So, if we are apportioning responsibility for gun deaths, you are ahead by a million and a half to nine.  Don't think we are going to be catching up any time soon, even if your disgusting claim were true.

Kevin McdCulloch, Town Hall:  "The lying President of the United States said this, “We know that the states with the most gun laws tend to have the fewest gun deaths. So the notion that gun laws don’t work, or just will make it harder for law-abiding citizens and criminals will still get their guns is not born out by the evidence.”

Only in the mind of Barack Obama."


Well, only in the real world, Kevin.  In your lying mind, whatever you want to believe is true.  But that is such an old phenomenon, and it is so hopeless to do anything about it, that who cares any more?


Of course, Conservatives spend their whole lives fomenting violence against Liberals, and then blame "mental illness" when a right wing neo-Nazi kills a bunch of college students, like happened this week.  Didn't know that the guy was a neo-Nazi?  Funny, the press isn't bothering to mention that.


What a miserable performance compared to the last administration.  Why, by the end of their two terms, the economy was...wait a minute, it was losing 850,000 jobs a month.  Oh well, just forget we brought the subject up.


I'm guessing that this has something to do with Benghazi!!!!!! although I can't exactly say what.


The Pope.  Un-Christian.  What a concept.  Funny, no one accused the previous Pope of being un-Christian for tolerating mass child rape in the church.  Actually taking the words of Jesus seriously, that is grossly un-Christian.


Funny, Obama is at fault for these guns falling into the wrong hands, but right wingers bear no blame for seeing to it that the country is now infested with 300,000,000 guns, which, as I mentioned above, are responsible for 1.5 million American deaths in the last half century.


That is, if their deaths will  happen in the future, they are only imaginary people:

"I...feel better for all the theoretical lives that will be saved, according to EPA sponsored studies such as this one.  However, my joy is tempered by the realization that  those are not real lives saved – rather, they are "estimated deaths saved"


Scientific estimates being nothing but fantasy, I guess.


Easy for them to say.  Say, maybe they could move in with the Duggars.

Jim Hoft, Gateway Pundit:  "Donald Trump: 99% of the People Would Be in Jail for What Hillary Did"

Ed Lasky, American Thinker:  "Hillary Clinton's Multiple Personality Disorder...Most politicians change their positions for political purposes. Only one national politician routinely changes her own identity -- her accents, her name, her personality and even her height"


Definite proof that she IS one of those shapeshifting lizard people right wingers are so worried about.

Mike Ford, American Thinker:  "Obama Is Going to Get a U.S. Pilot Killed"


Well then, he'll only have about 5,000 to go to catch up to Bush and Cheney.  I guess it's like Stalin once said:  "kill a person and it's a murder; kill ten thousand and it's a statistic."  Or in Republicans' case, just collateral damage- the price we just have to pay for the honor of waging a war that killed a million of them.  And you know who I mean by "them."


If only it were true- the best argument for gun control I've ever heard.


What a useless article.  Every Conservative knows how they want to make progressives' heads explode- with an AR-15.

Pamela Geller, Barb Wire:  "On Wednesday, Attorney General Loretta Lynch announced at the United Nations that her office would be working in several American cities to form what she called the Strong Cities Network (SCN), a law enforcement initiative that would encompass the globe.


This amounts to nothing less than the overriding of American laws, up to and including the United States Constitution, in favor of United Nations laws that would henceforth be implemented in the United States itself – without any consultation of Congress at all.


The United Nations is a sharia-compliant world body, and Obama, speaking there just days ago, insisted that “violent extremism” is not exclusive to Islam (which it is)."


These guys, for example, were apparently Muslims: 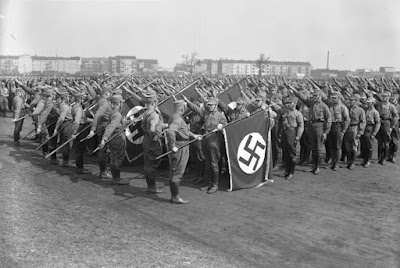 Of course, people like Pam Geller have been telling versions of this same lie as long as I have been writing this blog, and they intend to go on telling it.  And who knows, a few more people may still fall for it.

A. J. Castellito, Barb Wire:  "The Direct Link Between Demonology and Death"


The direct link between demonology and all consuming stupidity.  Unless you really believe that a few puerile teenage "satanists" are going to take over the world any time in the near future.

And, let me interrupt my maundering for a SPECIAL CONTEST: 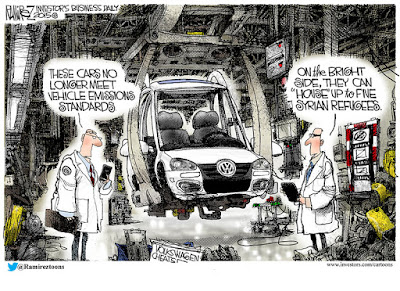 Can anyone figure out what is supposed to be funny about this cartoon?

Newsmax:  "Reports: Jeb Urged to Bring in George W. to Campaign in SC"


George Washington?  Man, that would help Jeb out.  Washington has not endorsed a candidate in years.  Oh wait, we're talking about his brother?  Idi Amin could stir up more votes than him.


Well, it didn't work except that they haven't had a single mass shooting in Australia since then, while we have about one a week here in The Greatest Country on Earth.  But then, we're special.  God has granted us FREEDOM that no other country has ever known!


Bobby Jindal couldn't catch fire in the middle of a volcano.

And now, how about a bit more Hillary bashing?

Katie Pavlich, Town Hall:  "Sorry Hillary, The NRA Is More Popular Than You"


Luckily for us, despite corporations now being persons, the NRA can't run for President.  This article featured at the top of Town Hall's website presumably to induce its right wing readers to forget that all of their human candidates are getting whipped in the polls by Hillary.

John Hawkins, Town Hall:  "John Hawkins: Hillary Is About as Qualified To Be President as Paris Hilton"


Paris Hilton having distinguished herself as a U.S. Senator and Secretary of State.  You remember that, right?  John makes this point:

" is a woman who’s widely acknowledged to be in the most dysfunctional marriage in the country really someone we should be considering for President of the United States?"


The most dysfunctional marriage in the country. Right.  You know who really has the most dysfunctional marriage in the country?  The Duggars.  Or maybe Kim Davis, now on her third or fourth marriage, after having gotten pregnant with one guy while married to another one. Or maybe Newt Gingrich, now on his fourth.  Or maybe David Vitter, who supplemented his marriage with wearing diapers and having sex with prostitutes.  At least the Clintons haven't deliberately raised any children with such contempt for women that they think it's fine to rape their own sisters. And a little more:


She can't do any better than a wildly popular two term President of the United States. She sure settled.

Man, they will tell any lie (or at least the same one over and over again) to get rid of her.  They are really afraid, aren't they?


Intelligent campaign rhetoric from the right.  At this rate, by the time the election comes around, we can expect headlines like "Hillary revealed to actually be Adolf Hitler without the mustache, which got bitten off when she was having sex with a donkey in Times Square."

Talk about telling the same lies over and over again.  Donald's column was motivated by the fact that only 143,000 jobs were generated last month, or over a tenth as many as Bush generated in eight years.  Shocking.

And, since we started with Jim Hoft, why not end with him.  I'm sorry to subject you to this, but here's something from Jim's website that really shows just how low Conservatives, who scream in terror every time a liberal says anything negative about them, will go to degrade their opponents: 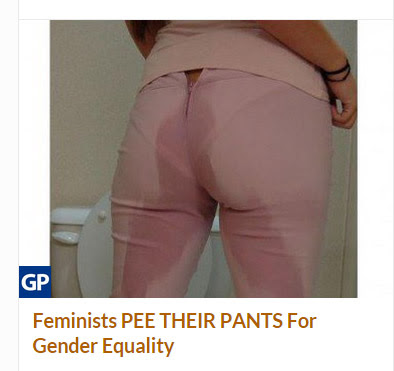 There really is no limit to their disgusting behavior.

Well, I certainly think that's enough for one day.

"The Pope. Un-Christian. What a concept."

I loved the link. Thanks.