Life in The Greatest Country On Earth

Here is some very depressing, but unfortunately all too predictable information about what has happened to the middle class in this country, since we have allowed voodoo economics to rule us.  It's from a piece at Daily Kos, based on an article at the Washington Post.  I'll quote Kos rather than the Post because, in true mainstream press fashion, the post shies away from the truly horrible conclusions of its own data:

"The United States has the world's poorest middle class...The Washington Post is out with some important charts incorporating data from the Credit Suisse Research Institute, which releases an annual report on global wealth.


First, the United States has a lot of very rich people.  At the same time, it has a large middle class that likes to think its the most prosperous in the world.


But, well, this isn't true...not only is the U.S. middle class -- in relative terms -- quite poor, but also that it benefits from almost zero public goods present in other advanced countries, like free-at-use health care, subsidized (or free) college tuition, reliable public transit, or subsidized child care."


Here's a chart illustrating this: 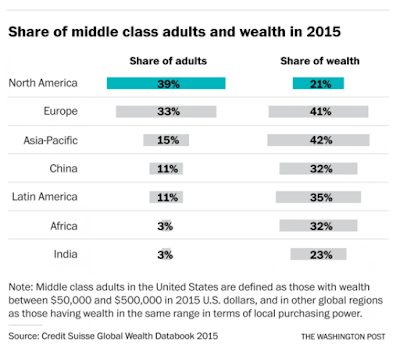 So much for the jingoistic liars who shout down anyone who tries to tell us that we do not have the richest middle class on earth.  In fact, the exact opposite is true.  Thanks to Reaganomics, we now have the poorest middle class on earth, and rich psychopaths like the Koch Brothers and the Waltons are going to do every thing they can to keep it that way.

I just want to point out that Thomas Piketty, in his now legendary economics book, has calculated that, by the year 2030, the United States will have the most unequal distribution of wealth of any country in the known history of the world.  This is what the many people of the United States who bought into the Republican politics of anger and greed and the absurd lie of American exceptionalism have brought us.  This is a sickening story of national decline that didn't have to happen, but there is probably no way to stop it now.
Posted by Green Eagle at 12:16 AM

And Barry has made the wealth gap greater.Yep who do you think ends up with the tab for all their briliant programs and regulations?

Apparently, you can't read. We'll just leave it at that.

That is because we have a huge population of people in poverty who are sucking up the resources,many who are not even citizens

“That is because we have a huge population of people in poverty...”

Yeah, like air, which is about all they have access to. Want to take that away as well? It would definitely reduce the number of poor people.

“...many who are not even citizens”

And many who are, but nice touch of Right wing xenophobia there. When done kicking your own citizens in the teeth, turn on the foreigners for being, well, foreign. And breathing.
Always guaranteed to excite the stupid and deflect attention from the people who actually cause poverty, which are the criminal rich.

But you clearly think THOSE guys are the ones who create wealth for all – instead of stuffing it their Cayman islands accounts - and should be allowed to have all they want, so that you might get a bone thrown your way, every now and again, for being a good little boot-licking dupe, full of slack-jawed befuddlement at how all those countries who have the things you resist seem to be a lot better off for it.

Magpie knocks it out of the fucking park.

Those countries pay 51 % income taxes and their govt's are going broke plus they don't have 300 million people of who 1/3 is government dependendent.
I know economics isn't a strong point of lefties
You will find many of those citizens of thise countries are disgruntled as well since their press is forbidden to report on it

Anon, I know it is a lost cause but any chance you have specifics with citable sources for your generalisations above?