Paul Ryan.  Now, they are supposedly begging Paul Ryan to become the third highest official in the United States government, a position which he claims he doesn't want.

Remember three years ago when Paul Ryan was revealed to be not the great conservative intellectual that the country was yearning for, but just one more dishonest, mean spirited Republican lackey of the rich?  By the end of the 2012 election, the Republicans were having to hide him in a closet to try to salvage their doomed Presidential campaign, because everybody could see what a vicious jerk he was, in spite of the mainstream press doing everything they could to pretend he was the nation's savior.

Well, all that is forgotten again, and the press is back to pretending that this miserable excuse for a human being can ever do anything but dig the country's hole deeper.  It looks like we are going to get him, two heartbeats away from being the President, whether we like it or not.  There is not one second that Republicans or the press think about what is right or true, and this is just one more move they will make to bring ruin on us all. 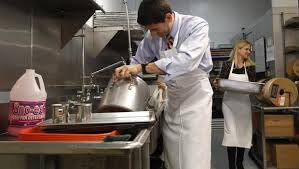 Remember this?  Paul Ryan pretending to wash dishes that were already washed.
Strange, really, since restaurant dishwasher is one of the few jobs he might be really qualified to do.
Posted by Green Eagle at 4:52 PM