The True Price of Pandering to Lunatics Like QAnon

I don't know that I have ever done this, but I am going to simply reprint an entire post by Lincoln Green at Daily Kos, because I believe the issue is so important and I couldn't put it any better than he did.  Lincoln, please forgive me for the theft.

In “Mother unraveled in depression, QAnon-style conspiracies in months before she killed 3 kids”, Matt Hamilton and Richard Winton today reported in the LA Times the horrifying story of how Liliana Carrillo came to kill her children Joanna, 3; Terry, 2; and Sierra, 6 months.

Carrillo was already having trouble with postpartum depression, anger, and childhood trauma. She was treated for depression but quit therapy and refused to take her meds.

What put her over the edge was QAnon.

Carrillo was convinced that a child sex-trafficking ring was active in her Porterville neighborhood. In her madness she eventually accused her boyfriend of sexually abusing their three-year-old. Before killing her children she wrote a manifesto saying, “I know that Porterville is the root of all evil right now. Both of my children have now vocalized to me more than once that their private parts hurt.” In a television interview Thursday, she said “I drowned them.… Do I wish that I didn’t have to do that? Yes. But I prefer them not being tortured and abused on a regular basis for the rest of their lives.”

The people who promote QAnon are partly responsible for the deaths of those three innocent young children.

Not that many of them care. QAnon is like a big game for them. They think QAnon is fun."

I would have lined to the original LA Times story, but it is behind a paywall. 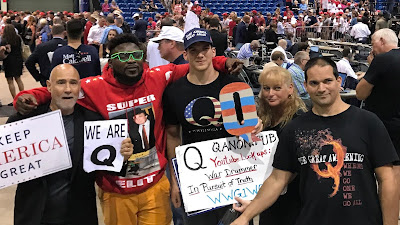 These people are murderers.  They don't think QAnon is fun- what they think is that it would be a wonderful way to end the meaninglessness of their own lives by promoting mass violence all over the country.  I've heard a fair amount of talk over the last year or so about Republicans being a "death cult."  This is a pretty fair example of what people mean when they say this.  These subhumans need to be stamped out by any means necessary before they turn this country into a place that is possibly worse than Nazi Germany- like a mixture of Hitler, Idi Amin and Pol Pot all in the same place.

H-Bob said…
People think the strength or intensity of thei emotions validates their concurrent thoughts. When the emotional intensity gets too strong then they implement the nonsensical thinking.
April 25, 2021 at 10:28 AM

H-Bob said…
People think the strength or intensity of thei emotions validates their concurrent thoughts. When the emotional intensity gets too strong then they implement the nonsensical thinking.
April 25, 2021 at 10:28 AM