A story whose significance has not been grasped by most people:

"Russian President Vladimir Putin on Friday called for a truce between the United States and Russia, asking for both countries to agree not to meddle in this year's elections.

In a statement, Putin wrote that he proposes "to exchange, in a mutually acceptable format, guarantees of non-intervention into internal affairs of each other, including into electoral processes, inter alia, by means of the ICTs and high-tech methods." 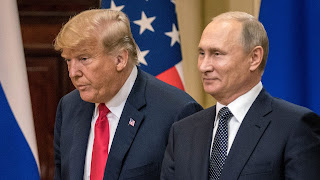 Vlad knows that he has milked his personal cow dry, so he is getting ready to ship it off to the meat packer.  Next thing you know, he is going to be joining the Lincoln project.

And as for Trump, he made the same mistake that Hitler did with Stalin- Hitler thought he was the baddest guy in the world.  He was wrong.  So is Trump.  Mister backstabber, meet an even bigger backstabber.  And it couldn't happen to a more deserving person.