There's a story that is getting a lot of play today, which is being greeted with a good amount of glee by Democrats, which I do not think means what people think it does.  This is the story that the Trump campaign has run through $800 million and is nearly broke; stories like this one:

"The 2020 Trump Campaign Is Reportedly a Financial Mess...a report from the New York Times details just how chaotic the Trump campaign’s finances have been, particularly for a reelection effort which began the day after the inauguration.

Though the campaign raised a total of $1.1 billion since the beginning of 2019 and did not have to spend money in a primary, over $800 million, or close to 73 percent, of their funds have been exhausted. Similar to the trajectory of the president’s business career, an early excess of cash appears to have been wasted due to questionable spending."

Well, I am certainly not questioning the likely fact that a great deal of the money that losers and suckers* donated to the Trump campain ended up in the Trump family wallets, but I do think that the idea that this somehow predicts the course of the rest of the campign is wrong.  To understand this, you need to know something which Republicans have always understood, but which very few Democrats ever seem to figure out.

I have to confess that, at a very young age, I was a Republican.  I won't explain why here, but I did quite well at being a Republican, and by the age of 19, I had a seat on the State Central Committee where I lived;  I knew the governor, and the head of the RNC.  I was well on my way to becoming another Lee Atwater or Karl Rove** when I realized what a sick mockery of democracy the Republican party was, and quit.  But before I did, they taught me some things, such as how Presidential campaigns really worked. 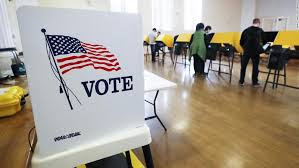 There is a Pollyannaish fiction in the United States about so called "independent voters."  Here is the truth about them.  Both parties are under immense pressure to move to the center in order to appeal to the maximum number of voters.  The inevitable result of this is that people that support one party's candidates or the other, make up the huge majority of the electorate, and they are inevitably pretty much evenly split between parties, except in extreme situations.  That means, as much as 48% are going to vote Republican, and 48% are going to vote Democratic, regardless of what the campaigns do.  The other four percent are the "independent voters." This is a natural phenomenon in an entrenched two party system, as immutable as the laws of thermodynamics.

The independent voters are almost universally portrayed in the mainstream press as high minded, and devoted to supporting the best candidate, regardless of which party they are from.  This is as big a fiction as Washington cutting down the cherry tree.  Really, what kind of person, particularly in a year like this, can make it to mid-September or October before figuring out who they are going to vote for?  In reality, these independent voters are the stupidest, most ignorant and gullible people in the entire voting populace.  And because everyone else is inevitably split almost equally between the parties, these are the people who select every President.

Well, the country learned to live with this outrageous way of letting the worst among us choose our President, until (of course) their avarice and lust for power led the Republicans to overturn the apple cart, first with Reagan-era "deregulation," and then with rulings from corrupt, packed courts, like the Citizens United decision, which allowed rich people to spend unlimited money in political campaigns, with no public knowledge of where the money came from.

I will go so far as to say that there is not a person who reads these words that has not been horrified over the years at the blitzkrieg of lying, smearing TV and radio ads from Republicans in the month and a half before the election, and which are virtually entirely financed by sociopathic billionaires like the Kochs, the Mercers and Sheldon Adelson.  That makes not one shred of difference to them, because the ads are not intended for you.  Every penny of the billions that will be spent by these people between now and November third will be directed at that four percent of fools who are too stupid to see what is going on in this country.  And none of that money will be coming from official Republican sources.  So it is perfectly fine with them if the contributions of the little guys (and that includes people who give tens or hundreds of thousands of dollars in hopes of currying Republican favor) are stolen by political insiders.  The money that counts from now on will all come from other sources, who do not rely on incompetent grifters like Brad Parscale and Kimberley Guilfoyle to spend their money.

I really don't know what Democrats can do about this ugly situation, short of throwing five corrupt Supreme Court justices in prison and replacing them with honest people (fat chance) but at least acknowledging the truth is a start toward finding a solution.  Sorry that I can't be any more hopeful about this, but it is still the truth.

**There were two of us they were grooming in my State.  I quit in horror, and the other guy ended up in prison in the Watergate scandal.