And Meanwhile, News About Another Hoax

That would be global warming, which we all know is nothing but a corrupt hoax perpetrated by a secret conspiracy of tens of thousands of scientists around the world, in league with America hating Democrats.

This is news about Charleston, South Carolina, which is one of the most beautiful and historically intact cities in the United States.  Perhaps I am overly sensitive to its fate, having lived there at one time, but I still was disturbed by this report, in the Washington Post today.

"Between 1953 and 2000, Charleston experienced minor flooding an average of eight times per year, according to the National Weather Service. In the past decade, that number has quintupled to more than 41 instances annually.

Monday’s event was classified as major flooding, a threshold reached only six times between 1953 and 2000, yet has happened eight times in the past two years, according to the weather agency."

Here's a picture, from the most historic part of the city: 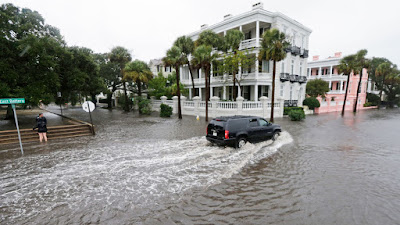 This area is one of the most precious remnants of our country's past, containing significant numbers of structures erected before the revolution, and many more, like these, from the antebellum period.  Funny that people who will throw fits of rage over the removal of a few statues of traitors to the United States, don't give a damn about the threat to places where we can really experience what the history of our country was like.  But then, dealing with the ongoing threat to our civilization itself posed by climate change, they will refuse to do a thing, and refuse to even admit that it is a problem, for one reason only: saving the world for their children and grandchildren might cost them a few dollars, and as good Conservatives, they are having none of that.