December 12, 2015
I'm so sickened with the outpouring of hatred from the right these days, that I haven't been able to pay much attention to it.  There is one issue, however, which has cropped up among Conservatives once agqain, which I would like to deal with.  That is the malicious notion that the rights enumerated in the Bill of Rights are restricted to U.S. citizens only.  This groundless claim has been used in the past, and is being used again, to justify all sorts of plans to promote their nationalistic hatred in one way or another. 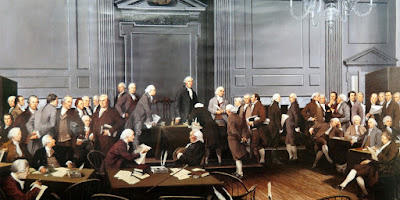 Debate over Bill of Rights


Now, I must admit that certain of the rights enumerated in the Bill of Rights do seem to be reserved for American citizens.  These can be identified, I think, by references to "the people;" which I think can legitimately be taken to mean citizens of the United States.  It is clear why that would be true.  The two most notable examples are in the first and second amendments.  It is obvious, I think, why the right to assemble might be restricted to U.S. citizens; a foreign mob that crossed our borders (unlikely as such a thing is) would not have that right.  And the same is true of the right of the people to keep and bear arms, which would not extend, say, to a foreign army that invaded our territory.

Other than where specificied this way, there is absolutely nothing in the Constitution that restricts these rights to American citizens only.  No decent person would suggest that a foreign citizen gives up his right to freedom of speech or religion when he visits our country, or that it is okay to arrest him without charges or deny him a fair trial.  Nor would any reasonable person suggest that it is permissable for non-citizens to "be deprived of life, liberty, or property, without due process of law."

Once again, Conservatives have promoted a totally fictitious account of what the Constitution actually says, in order to justify their miserable behavior.  Those who insist that "the right of the people to keep and bear arms" is absolute and inviolable, owe us at least the decency to read the rest of the Bill of Rights in the same  manner, and realize what we all know: that with certain obvious exceptions, these rights are intended to be universal.

Not, of course, that I think that right wingers can ever be expected to pay any heed to consistency, or even common human decency.  Still, we don't need to fall for their distortions.

Amendment II
A well regulated militia, being necessary to the security of a free state, the right of the people to keep and bear arms, shall not be infringed.

Amendment III
No soldier shall, in time of peace be quartered in any house, without the consent of the owner, nor in time of war, but in a manner to be prescribed by law.

Amendment IV
The right of the people to be secure in their persons, houses, papers, and effects, against unreasonable searches and seizures, shall not be violated, and no warrants shall issue, but upon probable cause, supported by oath or affirmation, and particularly describing the place to be searched, and the persons or things to be seized.

Amendment V
No person shall be held to answer for a capital, or otherwise infamous crime, unless on a presentment or indictment of a grand jury, except in cases arising in the land or naval forces, or in the militia, when in actual service in time of war or public danger; nor shall any person be subject for the same offense to be twice put in jeopardy of life or limb; nor shall be compelled in any criminal case to be a witness against himself, nor be deprived of life, liberty, or property, without due process of law; nor shall private property be taken for public use, without just compensation.

Amendment VI
In all criminal prosecutions, the accused shall enjoy the right to a speedy and public trial, by an impartial jury of the state and district wherein the crime shall have been committed, which district shall have been previously ascertained by law, and to be informed of the nature and cause of the accusation; to be confronted with the witnesses against him; to have compulsory process for obtaining witnesses in his favor, and to have the assistance of counsel for his defense.

Amendment VII
In suits at common law, where the value in controversy shall exceed twenty dollars, the right of trial by jury shall be preserved, and no fact tried by a jury, shall be otherwise reexamined in any court of the United States, than according to the rules of the common law.

Amendment VIII
Excessive bail shall not be required, nor excessive fines imposed, nor cruel and unusual punishments inflicted.

Zog said…
The use of "the people" in the Fourth Amendment does not seem to be limited to United States citizens, so why should it be limited to citizens in the other two cases?
December 12, 2015 at 8:37 PM

Green Eagle said…
Zog, I guess I was trying to be as liberal as possible in considering what parts of the Bill of Rights were intended to apply only to U.S. citizens. I am hardly a Constitutional scholar, so I guess it would be fair for someone to just say about this, "just shut up, you ignorant fool." There may be parts that were not intended to apply to everyone, but I think the rest of it absolutely was meant to apply universally, and that was the only point I was making.
December 13, 2015 at 1:25 PM

Anonymous said…
You are sick of the right wing sickos?
Imagine having to accept slavery, to get a new nation.
The government from the beginning, has enforced the constitutional rights, as citizen rights; and have refused those rights to "so called" non-citizens, like for blacks and females. Just examples, others were denied rights, like white men who did not own land. .
December 24, 2015 at 10:27 AM