December 13, 2015
Today, the following article from the Times:

"All Politicians Lie. Some Lie More Than Others."


An article featuring the following graph: 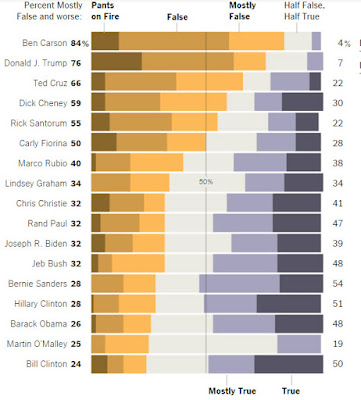 The author of this article, who I will not name to avoid humiliating her, claims to have been fact checking politicians since 2007.  Apparently, there is one thing that she totally failed to notice about this information she compiled, because she sure as hell never mentioned it in her article:  Not one single Democrat on the entire list scored higher as a liar than every single Republican.  That is, apparently, a much more insignificant conclusion to take away from her efforts, than the fact that "Politicians lie."

And this is in spite of another unmentioned reality:  anyone who has followed "fact checkers" from mainstream news outlets over the years knows that they fall all over themselves to find an excuse to justify calling out something a Democrat says as false, to falsely balance the daily bombardment of deliberate lies that is all Reublicans have to offer.  But even so, the fact remains that, to put it most directly, all Republicans lie more than all Democrats.

Do you think that was too insignificant a result of their efforts, to be worth stating clearly?

Infidel753 said…
Grrr.....They always bend over backwards to try to avoid looking partisan, I suppose. Well, the graph says it all. No one could avoid noticing.
December 13, 2015 at 12:32 PM

johninoregon said…
It will be interesting to see if Brent Bozell's Newsbusters try to somehow turn the NYT article into an example of "liberal bias."
December 13, 2015 at 1:55 PM