December 24, 2015
I guess it is on everyone's mind these days.  No sense discussing the fact that, unless you are using the term in its most restrictive form, to refer to Mussolini, who really popularized the term, and his government, there is really no agreement about what the term means.  There is, however, a very interesting list, compiled in 2003 by Lawrence Britt, of fourteen characteristics of a Fascist government.  Here it is:

Disdain for the Recognition of Human Rights

Identification of Enemies/Scapegoats as a Unifying Cause

Supremacy of the Military

Religion and Government are Intertwined

Disdain for Intellectuals and the Arts

Obsession with Crime and Punishment


Those of you who have never seen this list may be unpleasantly surprised to realize that the Republican party has now managed to unapologetically enshrine every single one of these fourteen characteristics as being essentials to what it means to be an American.

I think it can no longer be of any doubt that, when the Republican party sold itself lock stock and barrel to the hyper-rich, it started itself on an inevitable hundred year downhill road to becoming an openly Fascist otganization.  The only real question is, can they pull off turning our country into a Fascist dictatorship?

Looking at the classic Fascist governments: Nazi Germany, Mussolini's Italy, Franco's Spain, Argentina under Peron, you can see one historical characteristic that, so far, is missing in the United States today.  That is the existence of large armed, intransigent groups of armed thugs, dedicated to crushing civil opposition by force. 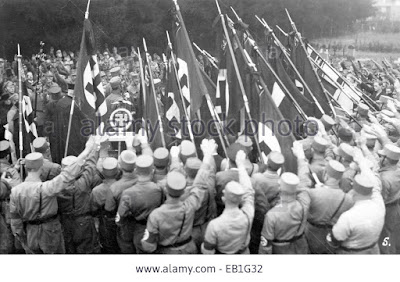 Sturmabteilung at funeral of Ernest Rohm 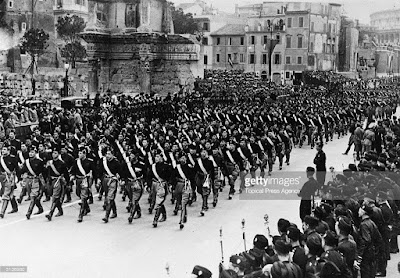 There are, however, hundreds of smaller groups of would-be thugs and murderers around- the militias, the border patrol jackasses, the Oath Keepers, the Three Percenters, and many others.  I believe that the major question facing this country today is whether a right wing demagogue like Donald Trump can so fill these people with hatred that they coalesce behind him and allow him to direct them as a single force.

If that could happen, the game would be on.  Now, of course, the members of these militias, etc. are largely out-of-control lunatics, each going off in his own direction, and united by nothing but a single thing- the desire to find someone that they can kill without remorse.  Well, the first step to changing that seems to be to find an American leader who is eager to take them en masse to that place; and Republicans certainly seem ot have found one.  There is nothing that I am watching more closely these days than for signs that Trump is casting aside the final vestiges of cover, and working to unite these people under his leadership.  Certainly, his open hatred and approval of violence at his rallies are suggestive.  I guess we will learn more in coming months.  And let's remember that, even if he cannot succeed, he has taken a giant step toward making authoritarian rule acceptable in the United States.  He's opened a door that we may never be able to close.

The vast majority of Germans, even those who supported the Nazi party in the 1920's and early 1930's, had no idea what they were signing on for.  I am sure that the same thing is true in this country right now.  The American right is playing with a time bomb, and if it explodes, it will engulf all of us.

Anonymous said…
Who were the people who went to national health care town hall meetings and started the fights? The pushing, shoving, shouting down and of course they bought their guns along for a little extra intimidation.
December 24, 2015 at 10:44 AM

Infidel753 said…
Identification of Enemies/Scapegoats as a Unifying Cause

I defy anyone to read that in our current situation and not immediately think of Trump. It's almost like he's consciously following the playbook. His whole campaign has featured anti-Latino agitation and demonization, and recently he's started targeting Muslims too.

Disdain for Intellectuals and the Arts

The modern Republicans have carried this a step further into disdain for science itself (creationism, global-warming denialism). The old European fascists weren't that dumb in most cases. They generally realized that science is useful. Although the Nazi regime did ban the works of Darwin, largely because they were considered disrespectful to Christianity.

Interesting point about the hodgepodge of militia and other armed nut groups as a counterpart to the Brownshirts. My sense is that, aside from those groups being too disorganized, they're also too weak relative to instruments of formal state power in the US such as the police and army. The government could easily crush them if it were really determined to do so. But the scenes of protesters being roughed up at Trump rallies certainly evoke the thugs who were part of the early Nazi movement.
December 24, 2015 at 3:24 PM

Green Eagle said…
The militia groups are certainly disorganized and prey to the conviction that each one of them holds the only key to the truth. But remember that Conservatives are essentially authoritarian. I believe they are highly susceptible to being drawn together by a sufficiently charismatic figure, If Trump is just too ludicrous to fill the bill, sooner or later someone else will come along. Remember that Mussolini was not the first person to rise to prominence among the people who would form the Fascist movement. It just that the previous collection, mainly of academics and intellectuals, did not have the ability to really connect with the masses of discontented rightists the way the ex-Socialist Mussolini did. We can already see that Trump's utter contempt for facts and for common decency has struck a strong chord among these people. Perhaps he can unite them; if not, the point has been reached, I think, where a succession of Ted Cruzes, and even more malignant figures (perish the thought) will take a try to ride this particular tiger, and one of them may well succeed.

And remember that, after the Beer Hall Putsch, the Nazis never again tried to attack the State directly. They devoted their violence to attacking other political parties and individual politicians. All it will take for that sort of thing to flourish in this country is a few intransigent right wing members of Congress, to prevent any national effort to stop them; and needless to say, those guys exist and have proven their ability to bring the government to a halt.
December 26, 2015 at 12:05 PM