And first the Really Important News: 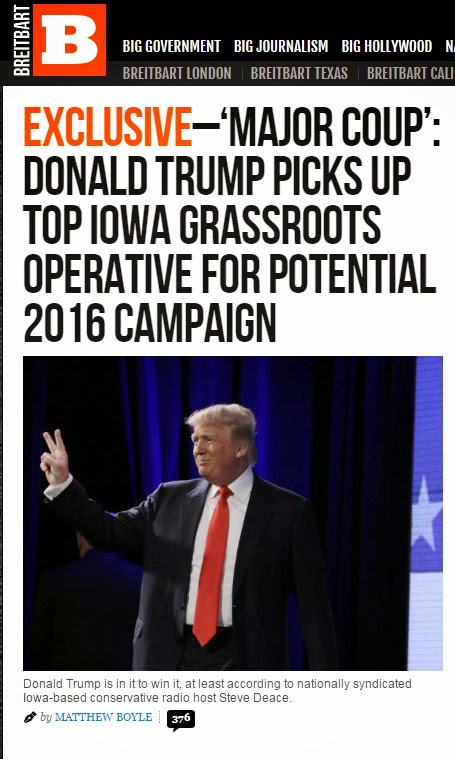 
"Somehow."  Maybe when the government released it to them?  But of course, it is an abomination when anything telling the truth is released for public view.


Gee, I wonder why that is.  John helpfully points out that the Koch brothers are pro-immigration (more workers means lower pay) and anti-drug war (government money that is not just given to them.)  He forgot to mention that they are anti-democracy and pro-fascist dictatorship, but I guess you can't cover everything in one article about why people hate them.


Well, almost everything.  It took Republicans to ruin 90% of Americans' chances to live middle class lives.


Don't you just love a Republican cat fight?  Or pig fight.  Or, whatever.  Now if only we could get them to stop acting like pigs...

Patrick Garry, Renew America:  "A conservative alternative to Obamacare... There are only two basic choices for controlling costs in healthcare: government-imposed cost controls, or a fully functioning competitive marketplace where consumers control the allocation of resources through their economic choices. However, even before Obamacare came into existence, there was never a true and open marketplace in healthcare. It consisted of massive and inefficient entitlements that drove the nation further into debt."


Let me translate this:  The "entitlements" Patrick is talking about consist of employer-provided health insurance.  Patrick proposes to start out by eliminating that, and forcing every American to negotiate their own health coverage.  Of course, that (minus taking away employees' health care) is exactly what we had for decades before Obamacare was passed, but this time, the insurance companies are going to just forget about their insane greed and run the system for the benefit of consumers.  That's the Republican plan.  Makes sense to me.

Bryan Fischer, Renew America:  ""Obama is not a Christian. Obama is a secret Muslim. Obama doesn't love America." Tell me again, Mr. Liberal, why does any of that bother you? Hmmm?"


Well, maybe because these are among the most despicable smears in the history of American politics, and are motivated almost entirely by race hatred.  Maybe that's why liberals don't like them- because liberals like the truth.  I know you can't understand that position, but there it is.

Astute Bloggers:  "...the Dems passed a similar law for health insurance. One size fits all. The dems still call less expensive plans that we USED  TO be above to buy IF WE WANTED TO as "inferior plans".


BECAUSE THEY THINK THEY kNOW BETTER THAT WE DO WHAT WE NEED OR WANT OR DESERVE TO HAVE.


That's fascism folks.  The usual corrupt leftist scum are out there touting the success of Obamacare.  They might a well be saying the trains are running on time.  The trains on the railroad to serfdom."


I just don't know where to begin.  I'll just leave it by saying the grammatical errors are in the original.

Not that you'd notice.


No it doesn't, Jackie.  Not to you or any other God damned Republican on the face of the earth.  We have to put up with so many of your lies, but I'm not standing still for this one, the lie to rule all the others.  So, fuck you, Jackie, and your disgusting brother and every other Republican in this country.  Sorry, I couldn't even begin to joke about this one.

Brandon Cline: Embellish,  "Misremember or Lie: Whatever You Call It, It Will Eventually Come Back to Bite"


Unless you work for Fox news, of course. 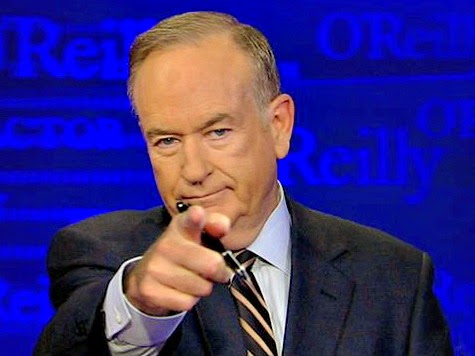 Daniel J. Mitchell, Town Hall:  "The First World War and the Costly Burden of Obamanomics...What does World War I have to do with Obamanomics?  There’s no real connection, of course"


Well, there you go.  It's not so often that they admit something like that.  Normally, they would blame the first world war on Obama.


I love the fact that he just assumes that Democrats hate Asian-Americans, one of the bigger lies I have heard lately.  No sense asking why, because the whole thing is nonsense.


Look around your own State, jerk.  In fact, just look in the mirror.

Kurt Schlichter: Let’s Destroy Liberal Academia...Its time to give current university system the Old Yeller treatment, except normal Americans will giggle when this rabid mongrel gets put down."


Well, that has been a proven tactic in the past when confronted with facts that right wingers disagree with: 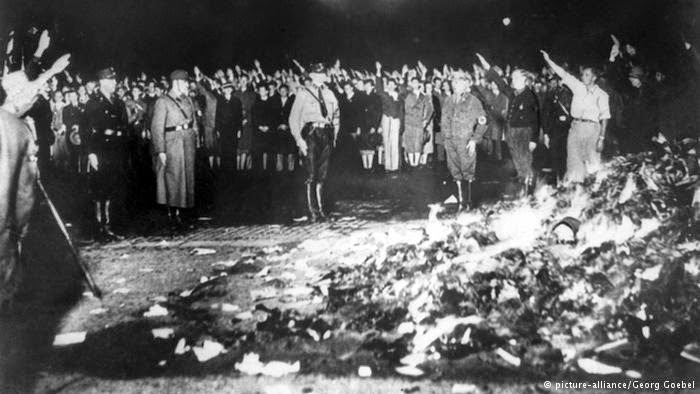 And in fact, there is every sign that it is working again, as we speak: 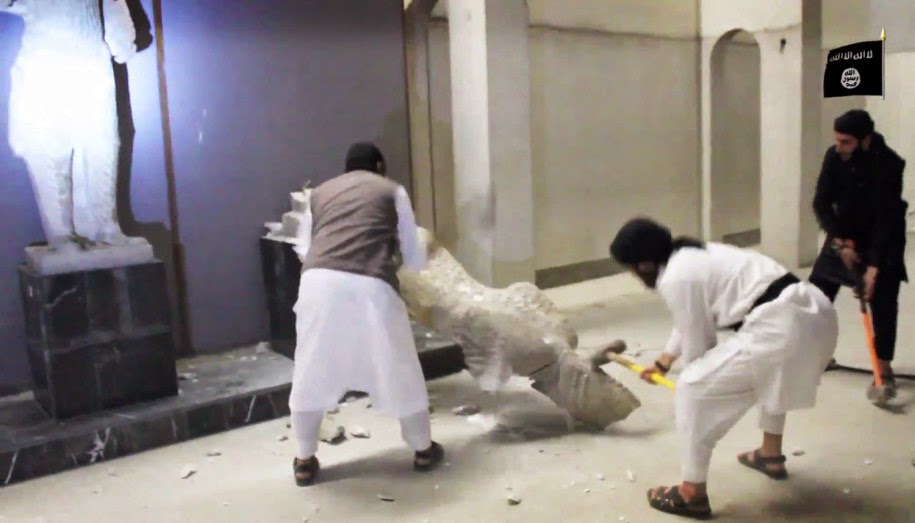 Hey, why not give it another try?  It works so well.

Matt Barber, Town Hall:  "America’s soon-to-be cultural-Marxist-in-chief would then spend the greater part of a decade waging war against our nation’s Judeo-Christian culture and heritage at levels, and in ways, unseen in our storied history. Today, his anti-Christian crusade continues unabated. In fact, and with less than two years left to complete his baleful conspiracy, this neo-pagan extremist has begun to rapidly accelerate his unravelings."


Can you connect that with anything that is actually going on in the world?  Didn't think so.

PJ Media:  "Watch the first ever conservative award show. It's the anti-Oscars, The Ronnies! People like Dinesh D’Souza have gotten excluded from The Oscars, so we right that wrong. "


Not while I'm watching, you don't.


Okay, okay, I gave it a look.  This entire "award show" consisted of three right wing dimwits with (believe it or not) an incredibly phony applause track.  Here they are- that's all you ever saw: 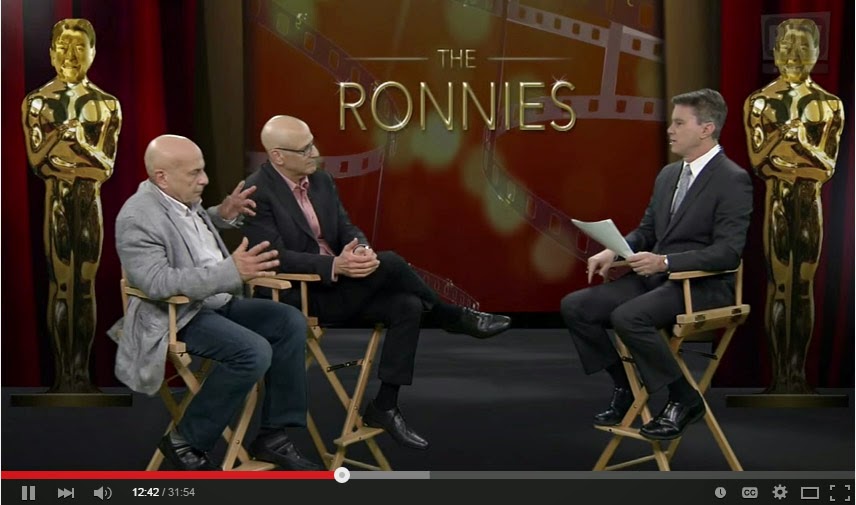 No stage, no audience, no nothing.  Just half an hour of right wing bullshit.  Way to go, guys.  I guess you just wanted to show how little you have to offer the American people.  And just for the record, Ronnie never won, nor was ever nominated for an academy award.  For good reason.


Because this week we are watching one of the greatest shows of Republican Congressional dysfunction in history.  So, it must be the liberals that are descending into farce.  Right.  Once again, a favorite Republican tactic: accusing the Democrats of whatever humiliating idiocy the Republicans are up to at the time, counting on the mainstream press to present the whole thing as a "he said-she said" fight with both parties equally bad actors.  And, it always works, so why not?


"Unarmed," in quotation marks, I guess, because anyone looking at the video of them killing him can see clearly that he had two arms.  So he wasn't unarmed, and it was perfectly okay to kill him.  See? Everything makes sense when you are a Conservative.


Too bad you hadn't figured that out a year ago, when all you Conservatives were telling us how much better of we would be if Putin were President instead of Obama.  Now, of course, you guys have moved on:


Who will it be next?  Too bad Moammar Khaddafy isn't still alive- he seems right down you alley.

Ben Shapiro, Town Hall:  "The Hillary Cover-Up and the End of Democracy...Sure, Hillary Clinton has a nasty history with crucial documents going missing --  the FBI found missing documents with her fingerprints on them in the White House personal quarters."


Time for one of the more disgusting right wingers to enter the conversation.  What Ben failed to mention, of course, is that those missing documents- found almost twenty years ago- totally supported what Hillary had testified to all along.  They exonerated her from lying Republican accusations.  Funny that Ben didn't remember that.


Jacob, here's a mini-lesson on government for you:  If Federal courts gave a pass to it, then it apparently was constitutional, no matter what ignorant nonsense you want to spout about it.  Don't like it?  Hire a lawyer and appeal it to the Supreme Court.  And then shut up.  Please.

Matt Vespa, Town Hall:  "NRA's LaPierre: 'If You Care About Your Freedoms... You Belong In The National Rifle Association'


Green Eagle:  If you care about your freedoms, you belong in the Green Eagle Society for the Preservation of Cane Toads- lifetime memberships available for the discount rate of $1000, and what a bargain. 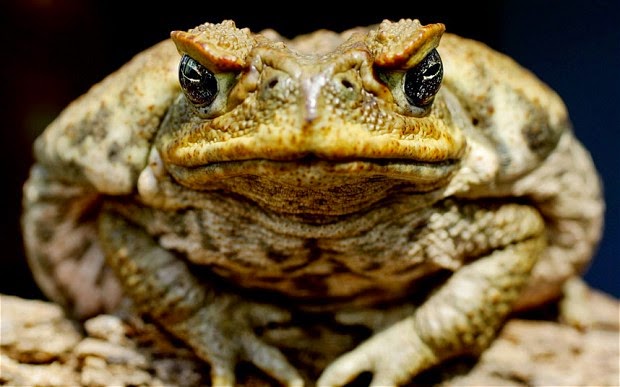 And this time he's really angry

Andrew Klavan, PJ Media:  "The Republican Who Can Win"


I won't bother to repeat any of this guy's blather, but let me just leave you with this:  He never came up with an actual name.  Says something, don't you think?


Would that be on one of the many occasions he was drunk in a bar, screaming abuse at liberals?

Phyllis Schlafly:   "The Obama Democrats have an audacious scheme for winning future elections. They just plan to import 5 million non-citizens and credential them as voters who will, in gratitude, vote Democratic"


Anyone who thinks this 90 year old hater is still in contact with reality should be able to give up that delusion now.

And now, the worst suggestion of the day:


The Bush doctrine, because it worked so well in Iraq...with one addition: more hatred of Muslims. That should work just great.


Do you want to hear the reasoning behind that one?  No, neither did I.  Other than, if the Koch brothers don't like it, it's unconstitutional.  Of course, that's what the whole Republican party believes about everything these days.