Some of you may have heard about an incident today in Mesa, Arizona, in which a jerk went on a rampage, shooting six people, thankfully killing only one of them.  This guy turns out to be a 41 year old idiot named Ryan E. Giroux, who I'm showing below: 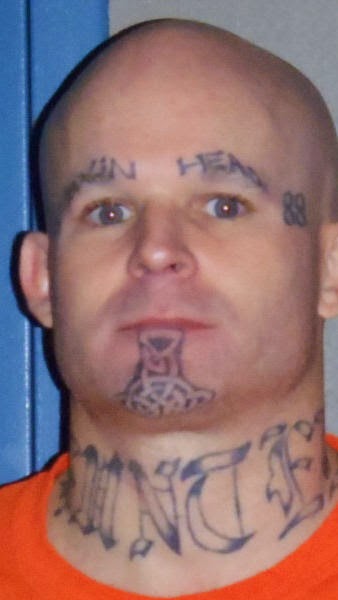 I do not think I need to explain to you what end of the political spectrum this guy comes from, given the very fashionable skin head eyebrow tattoos and other suggestive disfigurements.

Of course, he will be portrayed in the media as just a crazy guy, or maybe he was driven over the edge by playing warcraft.

And while I am on the subject, I'd like to mention some new news about another jackass, Larry Steve McQuilliams, who was killed by the police after shooting about a hundred shots at government buildings.  At the time of the shooting, it was reported that McQuilliams was an atheist who was active in the local Renaissance Faires, so he was quickly characterized as some sort of left winger.  Now it turns out that he left documents behind indicating that he was a participant in the Phineas Priesthood movement, which is associated with the hard core Aryan Supremacist Christian Identity movement, and has been responsible for a number of acts of violence against racial targets, abortion providers and other visible representatives of the left.  So much for McQuilliams supposedly being a leftist, but I doubt that the press or the right wing blogs will be very interested in correcting themselves.
Posted by Green Eagle at 9:08 PM

Well, he seems nice. It's good when people like this are thoughtful enough to advertise their political leanings so openly, thereby allowing those who don't share them to readily identify them and stay well away (sort of like a commenter I once saw on a blog, whose gravatar featured the slogan WHITE PRIDE WORLDWIDE).

Did the left wing media correct the hands up don't shoot lie? O yes one did and boy was there hellto pay


But really ,come on. they are just trying to "catch up" to the illegals who murder innocent people and the black communities who are killing each other every day in shootings and killing innocent bystanders mainly children in the process,
Guess what party they are affiliated with?
Besides right wing conservatives not affiliate themselves with losers like Giroux