Just How Crazy Are They?

More crazy than you ever thought:

"WASHINGTON -- Rep. Tom Cotton (R-Ark.) on Wednesday offered legislative language that would "automatically" punish family members of people who violate U.S. sanctions against Iran, levying sentences of up to 20 years in prison.

"There would be no investigation," Cotton said during Wednesday's markup hearing before the House Foreign Affairs Committee. "If the prime malefactor of the family is identified as on the list for sanctions, then everyone within their family would automatically come within the sanctions regime as well. It'd be very hard to demonstrate and investigate to conclusive proof."


Putting people in prison for 20 years because of something their uncle or great grandfather did.  That's Republican justice these days.  How can anyone think that there will be a shred of a decent country left here if Republicans continue on their present course?  Once it would be established that it was okay to put people in prison for something they had nothing to do with, where would it stop?  Particularly in the hands of Tom Cotton, who is a sufficiently mainstream Republican that he sits in the United States Senate.  This is a major feature of fascist dictatorships, not free countries, and it is long past time for people to get it straight about which one of those forms of government the Republican party is really trying to build.


Update:  Apparently, the 47 Republican Senators, led by Tom Cotton, who are trying to destroy the country's foreign policy, and who are behind this hideous proposal, may have stepped way over the line.  Here's the front page of the usually reliably right wing Daily News today: 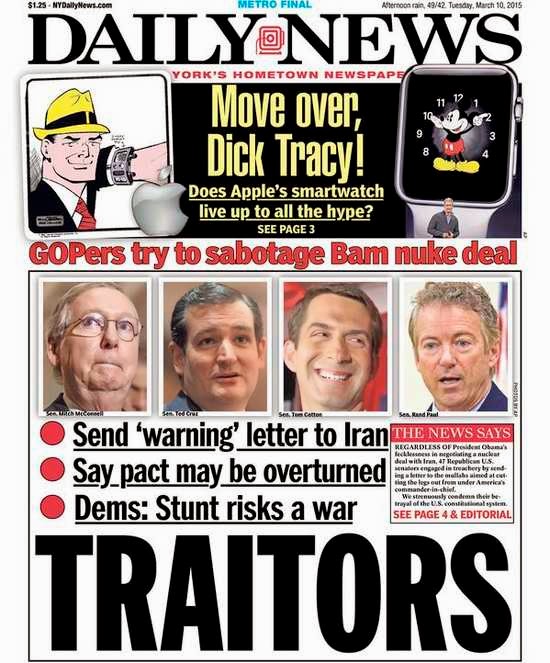 I just cannot even begin to say how stunning this story is.  Traitors.  I guess that is pretty blunt, coming from a normally party-line Republican propaganda rag- using a term normally reserved for Obama or Hillary to refer to the vast majority of Republican Senators.  Of course, elections belong to the Koch Brothers and Sheldon Adelson now, so maybe they have given up the pretext and are starting to prepare the American people for government by traitors, because they just don't care what we think any more.
Posted by Green Eagle at 8:32 AM

When your average, every day lunatic right winger suggest something moronic, we're used to it. When a UNITED STATES SENATOR says something so astonishingly stupid that no response is possible, that really says something.

Thatt business about family goes directly to jail, does not pass go, does not collect $200 is, as they say, Unconstitutional. Article 1, Section 9 "No Bill of Attainder or ex post facto Law shall be passed." A bill of attainder being declareing someone guilty of some crime and punishing them without privilege of a judicial trial, which is what Cotton is puttinf forth.

Tea baggers, luv the Constitution of their minds, the real thing, not so much