Too soon to report much of the inevitable right wing piggishness, as the Republicans join with ISIS ro make mutual hay out of the Brussels attacks.  Don't worry- it's coming, ready or not.  In the meantime:

John Hawkins, Town Hall:  "How Can You Feel Good About Yourself If You Vote For Hillary?"


One more delusional act of projection from the people that are getting ready to shame themselves asking you to vote for Donald Trump.

Matt Vesta, Town Hall:  "Trump Protestors Block Traffic In Arizona, Get Into Skirmishes With Police Near Trump Tower In NY"


Blocking traffic...no comment on Trump supporters beating up protesters.  That's just fine if you are a Republican.  But blocking traffic?  Death penalty!!!

And along the same lines:


Criminal violent assaults by Trump supporters?  No reason to worry about that becoming the norm too.  That's just the American way.


And now for a world-class entry in the delusion category:


Right, bro.  You count on that.  I guess it's the only hope you have at this point.  Well, except for out and out cheating at the Republican convention- and let me give you a hint:  that is still the most likely thing to happen, and the Republican base will eat it up, just like they get behind every corrupt, corporate shill the Republicans run.


And now, some more projection:


This, from the party that has spent the last month frantically trying to find a way to blame Trump on the Democrats.  By the way, the pundit he is talking about is Josh Marshall.  Of course, he didn't blame Trump, he just said this is a foreshadowing of the Trump era of American politics.  But, what's a little make believe between friends.

Jeannie DeAngelis, American Thinker:  "Behind the anti-Trump Disruptors, the Fine Hands of Alinsky and Obama"


Well, fine hands are better than small hands, I guess.  Enough of that for a while?  Let's talk about a different Republican asshole:


Many views, indeed.  Starting with its most high profile character, Frank Gaffney, a leader of the public crusade to claim that Obama is a Muslim, extending on to three people who work for Gaffney's think tank, all the way to Michael Ledeen, who, before the Iraq aggression, called for the invasion of not just Iraq, but of Iran and Syria too, and Andrew McCarthy, who specializes in pushing the view that Muslims are trying to impose Sharia law on the United States.  Many views of Islam indeed.  All of them, of course, hateful right wing delusions, but at least you do get to take your pick.


No, of course not.  Only Avner Zarmi understands this concept.  Oh, and the Koch brothers too. What it means is, limited to spending money on the rich.  Got it straight, now?


Well, if Republicans are living their self-induced nightmare, the Dems must be too, right?  This nightmare seems to revolve around whether Hillary Clinton will be indicted for something or other between now and November, or to put it more accurately, whether the Republicans can find one of the corrupt right wing Federal judges they have packed the courts with over the decades,  who will forever make himself one of the most loathed Americans in history by going along with their plot, late enough in the campaign that it will be impossible to get him smacked down before election day.  Wingnuts are salivating over this possibility every day, and as it seems like the only thing that can stop a Republican slaughter in November, it's best not to rule it out.


SLAPPING POLICE HORSE!!!!!  I don't think I need to comment further on that one.


Amazing how they hate Hollywood until they can find some has-been third rate actor to support a Republican.  Then, it's BREAKING NEWS!!!


Well, we are sure as hell afraid of a country run by him.

Virgil, Breitbart:  "We all know that the old ideological labels, such as “conservative” and “liberal,” are worn out. Okay, so what are the new labels? What are the new ideologies?"


Well, what with the decades of lies, incompetence and corruption, I agree that the word "conservative" doesn't mean anything positive any more, to most people.  "Liberal" is enjoying quite a comeback, in case you haven't noticed, Virgil.  Oh well, both sides are the same, and all that.


Outsider.  The country's first sitting Senator with a wife who is an executive at Goldman Sachs to be called an outsider.  By that sort of description, Osama Bin Laden was a Catholic.


The "leftists" trying to stand up for their elected President are a mob, while the paid crowds fighting for the right of rich people to overturn this election are "protesters."


Horrid!  Even in this case, where what the doctor was talking about was a baby that was so deformed that it was going to die within minutes, and the doctor wanted to spare the mother the incredible trauma of having the baby die in her arms.  On the other hand, it is perfectly okay for Christian lunatics to let their real, living children die after days or weeks of suffering because their idea of responsible medical care is to pray to God.


Yeah?  And what's your point?


The rules, apparently, being whatever the rich guys want.  I mean, we are talking the Republicans here.

Ed Morrissey, Hot Air:  "Say, where is the African-American revolt against Democrats?"


It's there.  On the same imaginary planet where trickle down economics works and there is no global warming, and where anyone but white voters love to stab themselves in the back.  Maybe you should move there, Ed.  Oh wait, everyone on that planet is already dead from wars, starvation and an unlivable climate.  Too bad.  Guess you'll just have to stay here and get another unpleasant lesson in reality in November.


Well, this is just too stupid to comment on, but I had to include it, just for the chance to post this picture of the "Trump advisor" in question: 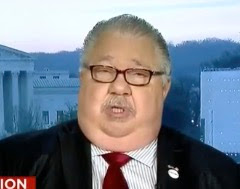 I mean, really, was this guy born to be a Republican, or what?


Of course, this was a "focus group" led by long time Republican smear-master Frank Luntz, the all time master of Making Focus Groups Come Out The Way We Want Them To.  Actual fact checking shows that Donald Trump lies at least as five times as much as Hillary or Bernie, but then, we are talking facts here.  Who cares about them?  Still, this "story" is all over the right wing world.


Pauperenza.  Why are they too stupid to realize that, if they would only prostitute themselves telling lies for the Republicans like Katie does for a living, they could be making plenty of money?

Rick Moran, PJ Media:  "Marine Killed at Secret Firebase in Iraq...When was the Pentagon going to let us know of its existence?"


Oh I don't know, why don't they tell us where the door is too, and which flower pot they hid the key under?  Remember that "us" in this case includes ISIS and Al Qaida.  But "we" have a RIGHT TO KNOW, or else we will attack Obama and Hillary for lying to us.

Mike Adams, Town Hall:  "The next time a college professor starts lecturing on the importance of a free and open marketplace of ideas beware."


Well, there you go.  Conservatism in a nutshell.