Trump Is Not Hitler

So, there have been few American politicians in our lives as openly nasty and hate filled as Donald Trump.  But I think it's time to stop the facile comparisons to Hitler.  These claims prove to me, more than anything else, how knowledge of what Hitler and the Nazis were, has largely disappeared in this country.  Here's a bit of perspective.

First of all, the United States in 2016 is facing little compared to the massive trauma of Germany in the 1920's, when Hitler rose to prominence.  Yeah, our last Republican President gave us one of the most humiliating military disasters in history, and Republican economic cant caused a major disruption in the economy.  But, in truth, the Iraq aggression really affected Americans in only very minor ways, compared to World War I Germany, where a large part of a whole generation was killed off, and the people at home suffered immense deprivation, only to lose a war that they need never have entered, and end up being charged massive reparations as a result.  And the 2008 economic collapse, as bad as it was, was a minor disruption compared to the complete devastation of the German economy that took place in the twenties, leaving a large part of the middle class destitute.  It is these people, not the poor, who formed the real core of Hitler's support.

Second, it is true that there have been some ugly threats of violence at Trump rallies, but again, these amount to almost nothing compared to the violence deliberately concocted by the Nazis.  It must be remembered that it was traditional for German and other European, parties to have uniformed paramilitary organizations, supposedly to protect their rallies and party workers from attacks; after World War I, these militias on the left and right grew more and more violent, breaking up opposition rallies, and even government meetings, and destroying the facilities of other parties.  This had become an almost normal fact of political life by the time that the Nazis began to emerge, and Hitler founded the Sturmabteilung, as one of these groups.  Eventually, it had hundreds of thousands of members, and became such a threat to Hitler himself that he had its leaders assassinated, and its power curtailed. 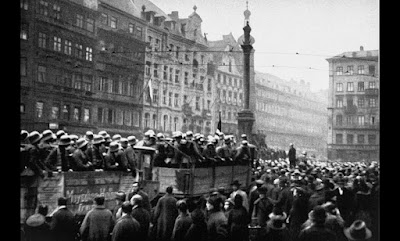 Here is a photo of the famous Beer Hall Putsch, in 1923, when Hitler attempted to take over the German government by force, convinced that the German army would rise along with him.  These people had gathered ready for violence.  Trump could never precipitate anything like this.  And we know from the recent debacles of the Bundy family, that the American right could never produce the kind of coherence or the numbers of followers to come close to this. 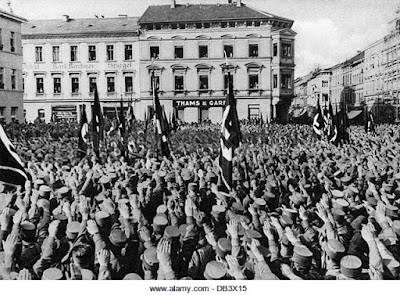 As the twenties went by, this group grew larger and more violent, as this picture from 1931 shows.  I think it is hard to imagine this many Americans really going out, dressing in uniforms, and engaging in wholesale violence, unless our political scene takes a drastic downhill turn.  And if it does, a buffoon like Trump is not going to remain the head of the movement for very long; he would be replaced quickly by some really evil and violent people, more along the lines of Dick Cheney. 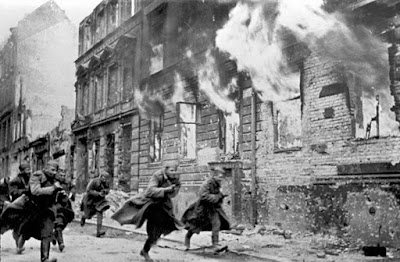 Things continued to deteriorate until Germany had this kind of internal violence by the late 1930's.  No American who is obsessed with his personal fortune, as Trump is, would ever want things to come to this; it would interfere with profits.

And remember, Hitler was a driven man with coherent, if evil, goals, and a real strategy to reach them.  Compared to him, Trump is a dilettante who is more interested in entertaining himself than anything else, and who we know will turn to some other entertainment if this one gets boring.

I am not saying that we should not be alarmed at Trump, who is a truly loathsome individual, but we should remember that he is the logical product of the hatred, anger and contempt for rationality which the Republican party has built over the last several decades.  It is the party itself that needs to be struck down, or else we are doomed to experience an endless series of Trumps, until one finally comes along that truly deserves the comparison to Hitler.
Posted by Green Eagle at 7:09 PM

I have fears you may be too optimistic.

"And we know from the recent debacles of the Bundy family, that the American right could never produce the kind of coherence or the numbers of followers to come close to this."

They can, and they have.

The Denver Public Library points out that, while the KKK had almost no followers in Colorado in 1920, by 1925, they were running the state government. Both houses of the State Legislature were controlled by the Klan, and Governor Clarence Morley was a member of the organization. Here's a picture of 30 clan members on a Coloradoferris wheel from 1926.

During the 1920s, the KKK had between 3 and 8 million members, out of a US population of 114 million. In addition to Colorado, they managed to gain control of Indiana, too. There were cities and towns across the United States where African-Americans were forced to leave - our version of ethnic cleansing. At one point, there were over 500 such sundown towns in Illinois alone.

More recently, in the 1991 Louisiana Gubernatorial election, David Duke won 38.8% of the overall vote - and over 60% of the white vote.


"And if it does, a buffoon like Trump is not going to remain the head of the movement for very long;"

Don't be too sure -- in 1924, many in Germany thought of Hitler, leader of the failed putsch, as a buffoon. In the past twelve months, Trump has gone from "joke candidate" to "he's probably going to be the Republican candidate," and the latter gives him a decent chance at becoming "occupant of the Oval Office" during the next twelve months. Remember George W. Bush? Remember Ronald Reagan?


"No American who is obsessed with his personal fortune, as Trump is, would ever want things to come to this;"

As I recall, Krupp made out pretty well as a result of the German government.

One more item:
"Germany, where a large part of a whole generation was killed off, and the people at home suffered immense deprivation, only to lose a war that they need never have entered"

There was also Mussolini in Italy, which was on the winning side in World War I. While the ethnic cleansing part wasn't entirely there, Franco did come into power in Spain, which wasn't involved in World War I at all (and, once Franco did get power, the Basque and Catalan languages were officially banned in Spain).

Here's an interesting and fairly in-depth article that speaks to your point. The author, supporting the thesis of historian Robert Paxton, proposes that Trump is more Mussolini than Hitler, but that the movement he's spearheading is truly fascist in form. We are also reminded how the European fascists looked to the KKK for inspiration, so the comparison is, sadly, not fanciful.

Ugh. But best to you, nonetheless ...

It will be to late if you wait til Trump is as bad as Hitler. Trump is showing the exact same characteristics as Hitler did.

He may not be Hitler, but he meets most of the fourteen characteristics of Fascism.

Jerry, he certainly does that, as do the rest of the current leaders of the Republican party. I looked at that list fairly recently, and almost wrote a post about exactly what you are saying.

As for Trump having the same characteristics as Hitler, only someone who knows very little about Hitler's history could say that.

As a side note, remember that although Gustav Krupp certainly was a long time backer of Hitler, his heirs were very mixed in their feelings, and some of them suffered a great deal for their opposition to the Nazis.